It’s Heeeeerrre!!! After all the teasing, we finally get to see the trailer for the new big-screen version of Stephen King’s iconic book IT. The original version was a made-for-TV offering and it looked like it. This time the movie might do justice to an amazing book; the trailer is really scary! I’ve always had a fear of clowns, and the clown sightings around the nation were pretty creepy, but Bill Skarsgård’s Pennywise is one of real nightmares. I still love Tim Curry as Pennywise, and will miss his wonderful voice- But I’m down to see the movie done right. 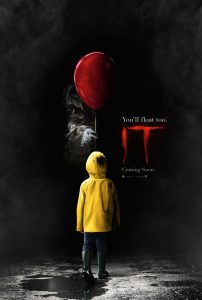 This film will only be the first half of the book and will be set in the 1980’s. (Changed from the book’s 1950’s) IT tells the story of a group of young outcasts (The Losers Club) in the small town of Derry, Maine. This motley group of kids decide to try to stop the shape-shifting evil creature who lives in the sewers. The planned second movie would pick up the story in the present day, with the surviving grown-up Loser Club members, returning to Derry to confront Pennywise one last time.

IT is directed by Andres Muschietti, best known for the 2013 horror flick Mama and is scheduled to be in theaters on September 8th, 2017.

The movie so far- looks a lot like what I remember from the book and the TV adaptation. I wish IT didn’t have to be two movies, since I’ve waited since 1986 to see the book done right on screen. But I am still excited to see what they do to make it better.