CAULDRONS OUT for this 90’s reboot Netflix has conjured up!

Coming of Age has never been so magical. 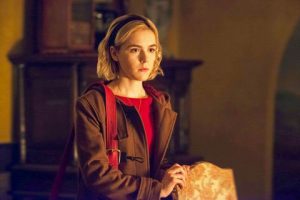 Netflix has released a new Halloween treat of a trailer for the Chilling Adventures of Sabrina derived from the comics, Sabrina the Teenage Witch created by George Gladir and artist, Dan DeCarlo; about a teenage girl played by (Kiernan Shipka, The Last Airbender, Legend of Korra) who finds out she is a witch coming into her powers all the while protecting her loved ones and the love of her life, Harvey Kinkle (Ross Lynch, My Friend Dahmer) from evil forces. This Adaptation is set to release October 26th, 2018 for full stream.

The show came into conception as a crossover episode on CW’s Riverdale in which, would kick start its own branched off series until plans changed in December 2017 when Netflix took over the project. As of right now, there is still no crossover being considered. Both projects will coexist as two separate entities. This particular project will be a lot darker than the Family-comedy series from the 90’s featuring Melissa Joan Hart. The reboot will always not feature anyone from the previous cast of the original due to copyright issues, but we will get some of the same characters we know and love but with new additions. 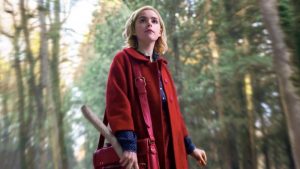 Our favorite Aunts, Hilda (Lucy Davis, Shaun of the Dead, Wonder Woman) and Zelda (Miranda Otto, What Lies Beneath, Lord of the Rings) will be returning in this reemergence. As well as our favorite eternally cursed black cat—Salem Saberhagen! The show plans on featuring a Pansexual character as Sabrina’s cousin named Ambrose Spellman!

This reboot has a totally dark and spooky feel with a twist of the teenage drama we all love! I don’t think I’ve been this excited about a TV series since Misfits! I nearly died from the sheer awesomeness of the trailer, I had always been such a fan of the original series and followed through with a save to my list. I can’t wait for the release, it’s going to be a fan-girl kind of night.

To view the Trailer, click if you dare. https://www.youtube.com/watch?v=Ab_rXrgk5R4