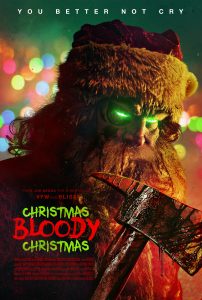 Joe Begos has done it again. While maybe not as perfect as one of my all-time favorites of Joe’s, Bliss, Christmas Bloody Christmas has everything a holiday horror should have. Sex, drugs, rock and roll, neon colors reflected in the snow, explosions, gore, and even robots!

I have always been a fan of the Killer Santa sub-genre. These films are usually mega-gory dark comedies. That works for me, because they are a necessary staple of my Christmas season, alongside my black Christmas tree!

“He sees you when you’re sleeping, he knows when you’re awake.” That stalker statement always gave me the creeps. “He knows if you’ve been bad or good, so be good for goodness sake.” Well, that never seems to stop our protagonists from cursing or screwing around, does it? 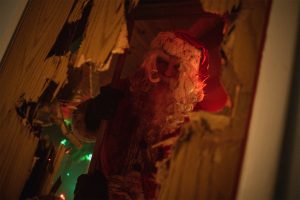 Christmas is not a wonderful time for everyone. Loneliness can be amplified by the so-called joyous holiday. The statement “Christmas Sucks” is cried out by many a Scrooge every year. Christmas Bloody Christmas is not different in that respect, except that now it’s “Christmas fucking sucks.”

Synopsis: It’s Christmas Eve and record store owner Tori Tooms just wants to get drunk and party, until the Santa Claus at a nearby toy store goes haywire and makes her night more than a little complicated. Santa Claus begins a rampant killing spree, ultimately forcing Tori into a blood splattered battle for survival. 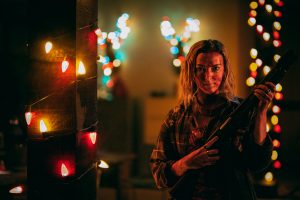 So, that is Christmas Bloody Christmas in a nutshell. But why should you watch it now? Because dear horror fans, I promise, if killer Santas are your cup of eggnog, then Joe Begos’s new neon-soaked nightmare will become one of your favorite Christmas slasher films. Listen up to this Christmas tale….

Once upon a time, a girl named Tori (Riley Dandy) and a guy named Robbie (Sam Delich) decide to hang out, drink, smoke weed, and see “what happens” on Christmas Eve. Their friends at the toy store down the street close up for the night and stay to play sexy in the Santa booth. All of them are naughty indeed. This awakens the robotic Santa in the store, which if they had been paying attention to the TV reports, would know it was one of many RoboSantas+ made with Defense Dept firmware and was now recalled because they were having problems. Big problems. Like, not caring who anyone is, and chopping every human they encounter into bits. Ho, ho, ho, Merry Christmas, indeed! 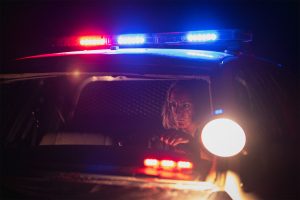 Tori is forced to find a way to survive, by any means possible, against a machine that cannot be killed. She gets very creative, and I caught myself screaming at the screen for her to “look behind you” because, well it’s a robot, right? It’s gonna get back up. The last few minutes of the film were intense! My favorite scene involved a “Terminator” type melting Santa. I loved every fiery, explosive moment. 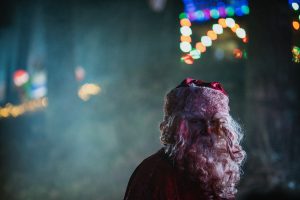 At first, it’s a cute kind of hang-out film, with a lot of getting high, listening to rock music, and leaving us wondering – will they, or won’t they? I found myself caring about most of the characters they encounter along the way though, so it mattered when any of them died. That says a lot about the writing and the terrific acting. Except for some of the cops- why are they always so stupid? The mockumentary-style commercials on the TVs at the beginning were a nice touch, and even though the characters never paid any attention to the TV, the film feels like it was ripped right out of the 70s! Shot on 16mm, it has a gaudy, grainy feel and the neon color palette was stunning. Kudos to cinematographer Brian Sowell! The heavy synth score by Steve Moore added to all the rock music and provided the perfect backdrop for the gore to come. 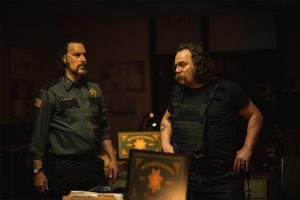 There are also quite a few horror veterans to mention. Jeff Daniel Phillips as Sheriff Monroe, Jonah Ray, Graham Skipper, Dora Madison, and Jeremy Gardner just to name a few. I must also mention the actor behind the killer Santa- Abraham Benrubi. He may have had an easy gig, just walking and chopping, but what a cool Santa!

And as a SFX person myself- I always feel compelled to mention the makeup- or in this case the gore extravaganza! Josh and Sierra Russell are masters, and it shows big time here. Tons of creative kills, car crashes, cool effects like a flaming Santa robot, real explosions, and so much blood! 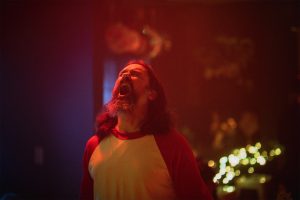 Christmas Bloody Christmas started out to be a remake of Silent Night, Bloody Night, but Joe Begos turned it into a fun, dark, irreverent new twist on the Killer Santa genre. The humor is black, the music is metal as hell and the final girl is a fucking sexy badass! I cheered at the end, just watching it on my computer! I need to see this on a big screen!

So, curl up by the fire, get yourself an eggnog, (spiked is my choice) and watch a killer Santa take care of all the naughty (and sometimes just in the wrong place) people. Happy Holidays- Rock On!

Shudder and RLJE Films will release ‘Christmas Bloody Christmas’ in theaters and it will stream exclusively on Shudder, starting December 9th, 2022.