WHAT CLASSIC HORROR LURKS IN THE DARKNESS OF THE CINEMA: A CHAT WITH PROGRAMMER LARRY DWYER

To be able to run a successful film screening series of any kind takes a combo of many things to be successful. Many don’t make it as the crowds come and go but when you find one that presents fan favorite horror films, good people and the experience to see your favorite films on the big screen… you cherish that. One such location is alive and returning fans to the days of yester year horror. Located in Seymour, Connecticut at legendary “Strand Theatre”, programmer Larry Dwyer and his crew of horror loving nuts bring the days of horror film to life as he blends an experience of community, film and culture every other month. With the next film screening on March 18th celebrating filmmaker John Carpenter, we talked with Larry about drawing fans, film selections, love of the 1980’s and more for The Blood Shed. 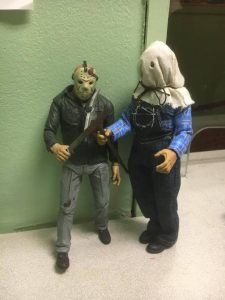 Thank you Larry for taking the time to discuss your horror screening event that you organize every other month called the Connecticut Cult Classics. First, film screening events come and go. For some, no matter what you put into them, there is always a question of support, availability, interest and more. However, you have grown and succeeded! Talk about how this came together and how you have been able to avoid the pitfalls of to succeed?

Larry Dwyer: Hey Jay! Thanks a bunch for reaching out. Back in 2013, Rob and Christine Caprilozzi of HNN and I had an idea to show a double feature at a local theater. Since those guys were funding it, they wanted to be a bit cautious as they did not know what to expect for a turnout so they decided to go with two films that are in the public domain; Romero’s Night of the Living Dead and White Zombie starring Bela Lugosi. While the attendance wasn’t amazing, it was definitely a fun night. Since we’d just shown two zombie films (and called it “Duo of the Dead”), I wanted to keep it going and follow up with two vampire films and feature The Lost Boys and Fright Night and title the event “Bite Night”. Rob kicked the idea around for a bit but in the end decided not to do it and started focusing his and Christine’s energies on CT HorrorFest. I never really lost the desire to do it again so, with the blessings of my lovely wife, I contacted The Strand in Seymour to do “Bite Night” in July of 2016 as a way to promote the 2016 CT HorrorFest. The rest, as they say, is history.

While I don’t know that I’d brand it “a success” just yet but the response has definitely been awesome! To attract folks from NY, NJ, MA, and DE to come to this classic theater in Seymour, CT to check out some non-35mm double features is unbelievable…I’m just gonna try my best to keep it going. 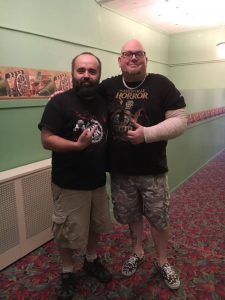 JK: It has been only six and counting including the up and coming March 18th John Carpenter Double Bill currently at The Strand Theatre in Seymour, CT. In those five previous shows, how have you grown from the business side running this event? How do you make it special for the fans who come out instead of sitting on their couch and watching?

LD: That’s the thing, isn’t it? I’m not showing these films on 35mm which I know is a bid deal for a lot of folks and will get them to travel for a show so how do you make it worthwhile for them to come out to watch the versions that they could just as easily watch at home? I think the answer is to try and make the night as fun as possible. I roll sponsor info on the screen as people are coming in and then again during intermission; I try to make that fun by playing some rad music during it. I pick some of the best and nuttiest trailers that I can come up with to show before each film. I also get some awesome raffle stuff to give away during intermission; I’ve had Romero autographed posters and this time a Carpenter autographed 8×10. Lastly my man Matt Wilson makes awesome commemorative posters and giveaways that everyone can grab on their way in or out.

JK: Talk about the role The Strand Theatre plays in the scope and growth of this event?

LD: The Strand has been awesome to work with. The theater is run by the local Knights of Columbus and I’ve dealt with John from the KOC since I started this thing up. I think he was a little skeptical at first about what I wanted to do but he was open to give it a shot. They’re great at promoting the events for us as well. Just a great bunch of folks. 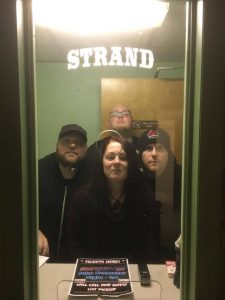 JK: During those five screening events, you have featured primarily horror films of the 1980’s with films from the Friday the 13th franchise, vampires, slasher, Carpenter and Stephen King. I know you love that period of horror filmmaking but seems a bit safe. Is this what fans want?

LD: That’s a great question, Jay. The answer is, I’m not quite sure yet! Hahaha. “Bite Night”, “Stephen King Night” and “Friday the 13th Night” were all smash hits as far as attendance but “An 80’s Slasherversary” (featuring The Burning and April Fool’s Day) and “Halloween Havoc” (featuring H3: Season of the Witch and Trick ‘R’ Treat) were a bit light in attendance. I also expect a good crowd for March’s “John Carpenter Night” but I think the April show will really be the test. In April I’ll be showing one much loved sci-fi movie along with an insane underground flick. I can’t announce the films yet but it will be a test to see what kind of crowd I can draw for this one. I’d love to be able to show some crazier films but need to sort of test the waters to see what I can get away with, if that makes sense.

JK: I have been to a couple of the screenings and so happy to see the theater packed with fans as well as your feel Horror News Network cohorts helping out! What has their support and your family meant to you?

LD: Everything. I didn’t even have to ask any of these cats, they just show up and help. Rob and Christine, Sean McLaughlin, Mike Simonetta, Nick Banks, Matt Wilson, Kolleen Kaffan, Kyle Gunnison and Chris Conway. Awesome people always looking to help and support; it’s what our little slice of the horror scene is all about. Of course, my wife and kids have to deal with my constant search for trailers and raffle prizes when I’m supposed to be watching Trolls with the fam. They put up with a lot for me. 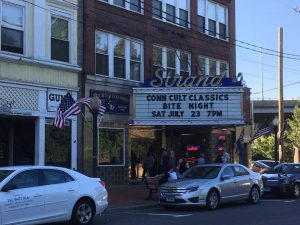 JK: Coming up on March 18th, you have the John Carpenter Double Bill with Big Trouble in Little China and The Thing. I guess you could call it the Kurt Russell double bill. What was it about Russell and Carpenter that went so well together?

LD: It’s magic, right? These two films plus Escape from NY & LA as well as an Elvis bio film. Word is that Carpenter wanted Kurt to play Nada in They Live as well but he was wrapped up doing Overboard with Goldie Hawn or some shit, right? You should probably fact check that as I may have made that up in an acid flashback… hahaha.

JK: What has been your favorite of the screenings to date?

LD: Tough one! I think I have to say Friday the 13th. Not because they are my favorite movies but because it was awesome to see a whole crowd full of people in cheesy anaglyph 3D glasses pumped to watch Part 3 in 3D; probably for the first time for almost all of them. It’s all about the fun and that was a blast. 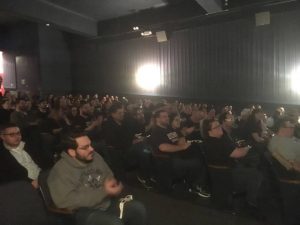 LD: It’s the best but also nerve wracking because I always want things to go perfectly which they don’t always do. Most of these films I’ve seen a million times but it’s still always cool to see them on the big screen and I know the fans dig it. A lot of them leave me little personal notes on their ticket order forms talking about how much they love these and thanking me for doing them…it’s really a great feeling.

JK: What is a funny story you could tell the readers who may be coming out to the screening?

LD: If you remember Friday the 13th Part 3, you’ll remember that it starts out with a good ten minutes of the ending of Part 2. Well, while that scene was playing during our showing there was audio but no vocals. What I mean is, all of the music and noises were playing but there was nothing coming out when the actor’s mouths moved. Mike Simonetta and I were up in the booth trying to remember if it was supposed to be like that or if there was something wrong. In a moment of genius, I grabbed my phone and queued the movie up through a site and found out that there was definitely supposed to be voices. So Mike went to work trying to fix that since he is the behind-the-scenes genius. It took a few minutes and I cracked a few jokes over the mic while he was fixing it and then he finally got it working…only the voices were in Spanish! So now the audience is roaring with laughter as they’re getting to watch the first ten minutes of F13 Part 3 in Spanish until Mike was able to get it corrected. 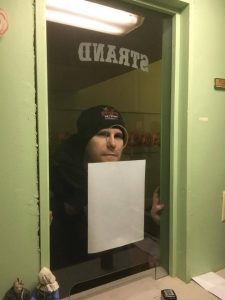 It’s all part of the experience. It doesn’t always work out perfectly but if everyone is having a good time, those little things can lead to funny moments!

JK: Where can we find out more about the Connecticut Cult Classics? Can you tell us what you have planned after the March screening?

LD: You can always find us at www.ConnecticutCultClassics.com and you can catch us on Facebook as well as Twitter and Instagram (CTCultClassics). The next show after “John Carpenter Night” will be on April 22nd and will feature a bit of hilarious cult insanity followed by a sci-fi mega-classic. I’ll be announcing the films at “John Carpenter Night” so hopefully you’ll be there for the unveiling!

JK: Thank you for your time!

LD: Thanks to you Jay!