The Blood-Shed teams up with Comet TV to get you some awesome giveaways!

I just recently discovered COMET TV on my Roku and I love it! You don’t need a subscription for COMET- It’s Free!

On Thanksgiving Day, COMET TV has The Freaky Feast Movie Marathon featuring Superbeast, The Incredible Melting Man, Howling II: Your Sister is a Werewolf, The Video Dead, The Beast Within and Creature. More fun on Thanksgiving than getting the big half of the wishbone!

The Blood-Shed is teaming up with COMET TV to give you girls and guys the chance to win some really cool old-school goodies! November is here and what better time to think about friends, family and feasts? This month COMET TV is dishing out all kinds of supernatural goodness! And they want to give you the opportunity to have a Freaky Feast of your own all month long! You could win the COMET TV November Freaky Feast Pack. It’s perfect for a Horror-iffic gathering!

Here is what you do to win: Click here to go to The Blood-Shed Facebook Page. Like, share and let us know why you should win. Hashtag #TheBloodShedNovCometGiveaway. We will randomly pick a winner on Thanksgiving Day! (Giveaway open to the US Only) 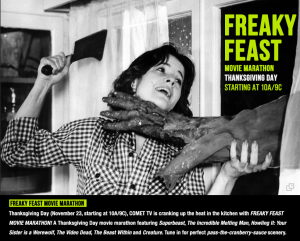 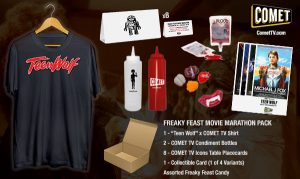 AIRING ON COMET in November

Thanksgiving Day (November 23, starting at 10A/9C), COMET TV is cranking up the heat in the kitchen with Freaky Feast Movie Marathon featuring Superbeast, The Incredible Melting Man, Howling II: Your Sister is a Werewolf, The Video Dead, The Beast Within and Creature. Tune in for perfect pass-the-cranberry-sauce scenery.

Airing weekdays at 4P/3C throughout November,

Classic Space Opera is coming to COMET! Based on materials from sci-fi legend Gene Roddenberry, Andromeda stars all action hero Kevin Sorbo as the Captain of the Andromeda Ascendant, a highly advanced ship whose crew is charged with restoring power and stability to the Systems Commonwealth. But, to succeed the Andromeda crew must battle one of sci-fi’s weirdest looking bad guys….the sinister Magog!

If you thought gate-hopping action was fun in the Milky Way, just wait until you see what it’s like in the Pegasus Galaxy. Stargate: Atlantis sees a team of international scientists unlocking the secrets of a legendary ancient city, discovering a whole new stargate network in a whole new galaxy, and bringing them face to face with the Wraith, a powerful enemy who are best summed up with the term ‘Evil Space Vampires’!