Even though she has a heart of gold, she doesn't scare easily!

Deanna Uutela likes to balance a kind heart with a love of horror.  She prefers the ‘old school’ way of horror.  She also gives props to the new style as well.  She loves to bring horror fans together in hopes of creating new fans.  She also enjoys using her modeling skills to pay home to some of her favorite horror movie scenes.

DP: What do you find more effective gore or suspense?
DU:Both have their brilliant moments and are important for the horror genre when done right. But having grown up in the ‘80s, suspense will always win out over gore for me. It is the difference between Tim Curry playing Pennywise and Bill Skarsgard—subtlety and suspense vs. special effects and shock factor. Both were great but I will always prefer the original.

DP: What draws you to the horror genre?
DU: I grew up a country kid and was limited on television time but free to read as many books as time allowed. I loved adventure books where the kids were in danger and had to solve mysteries. I snuck into my older brother’s bedroom to get a lot of the books I read. When I was about 11, my brother then 15, started reading Stephen King. The first horror book I read of his was “Misery”. It was like nothing I had ever imagined or saw and I couldn’t put the book down for a week. The more Stephen King books I read, the more I felt like I had found my “thing, my home”. From there I would beg friends to put on horror films instead of romance when I stayed over at their house, especially ones based off of Stephen King books. The suspense, the fear, the monsters within us, the monsters in our closet, the beauty in abnormalities. I could care less about dating boys. I fell in love with horror. And then bands like The Misfits, The Cramps, Marilyn Manson and Rob Zombie showed me that horror is well beyond just a genre, it is a lifestyle and an industry that I knew I had to be a part of one day.

DP: How has Horror Heals brought fans together?
DU: I developed Pdx Horror Heals Con as a way to combine two of my biggest passions in life (besides my family): horror and activism. I have helped put on horror events and did a horror convention of my own in the past. Horror Heals Con is different and is special to me because it really shows people who I am and how much I care about our horror community and community at-large. I think horror fans and celebs alike are really excited about the idea of coming together to celebrate the horror industry and give back to the causes in the NW that need it the most. It is showing a different side of horror, the softer side.

DP: As a model what is one horror scene or character you always wanted to do?
DU: When I was horror modeling and directing with The Living Dead Girls, I loved to put my own interpretation and spin on classic horror characters and scenes. One film that I really want to take on still is Poltergeist, and I still have that in the works to produce and direct in the near future with The Deadly Darlings and The Living Dead Girls.

DP: What future projects are you excited about?
DU: Besides PDX Horror Heals Con, happening this November 17 & 18 at University Place Hotel, I am excited to produce some more horror photoshoots, collaborate on projects with others working in the NW horror scene like Horrors of the PNW, and bringing back my column “Scarers Who Care” for the Horror Heals website.

DP: What can new fans of horror gain from Living Dead magazine?
DU: I was lucky enough to produce 8 print issues of Living Dead Magazine, which was pretty amazing in this economy. The reason I think people enjoy Living Dead Magazine is because it is more of a lifestyle magazine than a horror film magazine. Sure we have some film reviews and previews, but our staff focuses a lot more on showcasing bands, small businesses, products, art and nostalgia. Our Creative Director Mandy Cramer designed every issue to be a thing of beauty that should be hung up on a shelf. 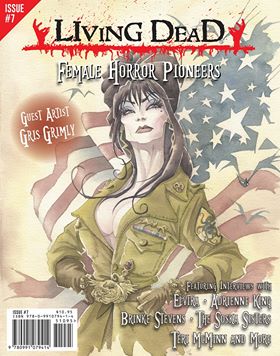 DP: Who is your favorite horror icon and why?
DU: I have two: Pennywise and Michael Myers. Pennywise because he is one of Stephen King’s best creations and made me have the love/hate relationship with clowns that still exists today. Michael Myers because John Carpenter is absolutely brilliant and developed with his Michael character the masked silent killer format that influenced so many slasher films that followed. I think I had a strange crush on Michael as a teen, which says something I guess about my demented psyche, I always wanted to see the monster behind the mask and felt that just maybe I could turn things around for the sister killer.

DP: How do you like to scare your fans?
DU: I scare horror fans with my cheesy one-liners and my Joe Bob Briggs/Elvira style of writing. If you could compare what I do to anyone out there, it would be Lloyd Kaufman.  I am a huge fan of horror sex comedies and monsters developed from toxic waste.

Deanna brought a lot of insight into her personality and views on the horror genre.  I’m anxious to see what Horror Heals does next.  A new horror magazine would be a great addition to the horror community.  I’ll definitely keep an eye out for future issues of Living Dead Magazine.  You can find out more about Horror Heals on Facebook.  This interview was supposed to be the April entry for the ‘Comrades In Horror.’  However, due to technical issues, we were unable to post it then.  Thank you for your understanding. 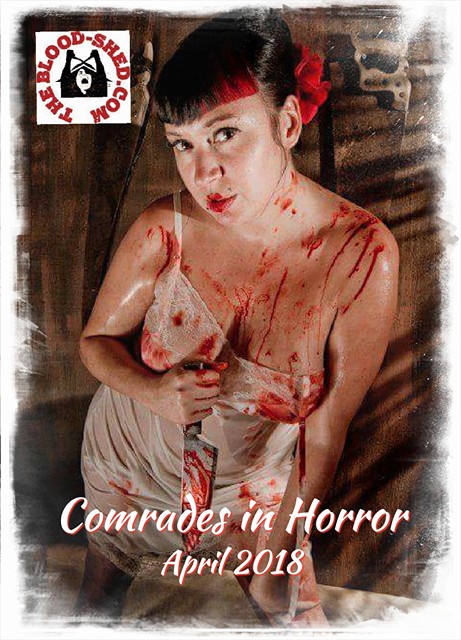