Tim and horror work hand-in-hand to draw in the fans.

Tim is a horror fan who isn’t afraid to look for new opportunities.  He uses conventions and musicals as tools to bring his love of horror to fans, old and new.  Below, Tim reveals his love of horror, his projects, and teases some new projects as well.

1) DP: What was it that brought you into the industry?
I began as a concert promoter in the music industry.  When I grew weary of that due to lack of passion, I fell into independent film and film making.  The film festival experience was one I absolutely adored.  Having the background of event production, plus a lack of certain genre fests in my area, I decided to launch the Sacramento Horror Film Festival in 2007.  I met quite a bit of talented people in my early years as a film festival director.  Some of these individuals were multifaced and were also amazing performance artists.  Each year we added more and more performance artists to our film shows which gave our events a specific appeal.  As I reached the 10th year anniversary of the film festival, I was approached and challenged to produce Sacramento’s first successful horror convention.  I had no interest in horror conventions at that time, but being issued that sort of challenge was appealing if I could produce the type of convention I would want to attend, one being interactive, nostalgic, and a heavy emphasis on the art of horror film making as a craft.  In 2015, Sinister Creature Con was born.

2) DP: What do you find more effective: gore or suspense? Why?
I believe both can be effective as far as eliciting a fear reaction.  How effective depends on the storyteller.  I feel some of the strongest horror films effectively use both of these tools to scare and engage fans.  Too much gore, and you desensitize your audience.  Too much suspense, and audience patience levels can wear thin.  Suspense is easier on a budget and horror history tells us that success can be found in what you don’t see more so than what you do see.

3) DP: What’s your favorite horror movie?
I will always credit The Evil Dead and Sam Raimi for attracting my interest in what type of work goes into crafting a horror film.  But if I where to be whisked away to a desert island or a remove planet in outer space, I would probably select Let The Right One In as my current #1 horror film favorite.

4) DP: I hear you’re venturing into two full feature film projects as an executive producer. What can you tell me about them?
Some great things are coming.  Boundaries of found footage will be tested.  Stay tuned.

5) DP: Amber’s Sweets has covered Rocky Horror Picture Show and Repo: The Genetic Opera.  What other events do you have planned in the future?
We have also covered Dr. Horrible’s Sing A-Long Blog, Clue, The Devil’s Carnival, and we were the first in the world, I believe, to shadowcast Troll 2.
We are looking to do more original stage horror inspired, black box theatre type performances in the coming year.

6) DP: How does horror conventions differ from other conventions?
Horror is more niche so it’s quite a bit of work to hunt down and attract those in the market to a horror themed event.  Announce the words COMIC CONVENTION and the masses of all ages come running.  With horror, fans are more particular and are less in abundance than say the comic expo crowds.  Because of that, I feel horror convention fans are more loyal and passionate than any other convention attendee.

7) DP: The Love Horror Short Film Festival is coming in June.  What can horror fans expect from this upcoming festival?
It’s been rescheduled to July 14th.  Horror fans can expect an intensely curated short film program that will offer something for everyone.  Not only that, fans can count on a grand assortment of Northern California’s best performance artists performing their most macabre inspired bits in between film programs.  Film goers get the full film festival experience within a single evening.

8) DP: What future project are you excited about?
This year marks the 10th anniversary of the premiere of REPO! The Genetic Opera.  I’m hoping that the powers that be include Sacramento in a special celebration.  We’ve been a go-to city that’s celebrated and supported the film time and time again.  It would be fantastic to give it a birthday party worthy of a Largo.

9) DP: How do you like to scare your fans?
If a film scares me, then I absolutely hope it will scare others.  If a performance scares me, I hope others can share in my discomfort.  Selecting films, artists, and performers to participate in our events is a tough process.  But when you hear those shrieks, gasps, and then ultimately applause, it let’s me know I did my job correctly.

If you want to know more about Amber’s Sweets, you can check out the Facebook page.  You can also find out more about The Love Horror Short Film Festival here.  Keep an eye out for the upcoming Sinister Creature Con.  Tim’s first feature, a coloration with Gloomy Sunday productions, Louder Than Wolves: Taking A Stand Against Rape Culture, which is set to be released next year. 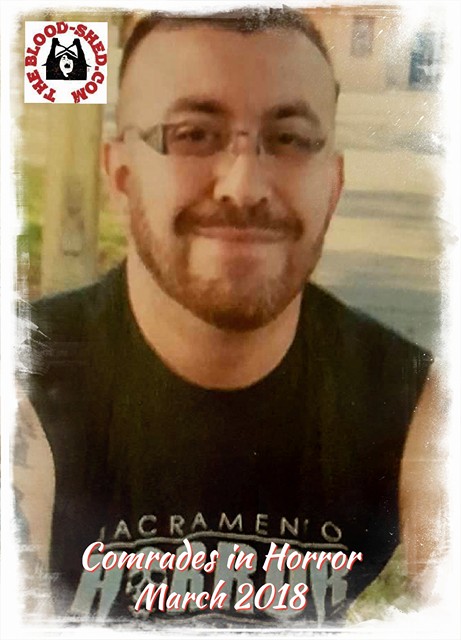