"There are many ways to explore the darker side of our psyches."-Tonjia Atmoic

Tonjia Atomic is an award-winning filmmaker, actress, musician, and writer. Her films include Plain Devil and Walking to Linas. Her writing has been featured in several online and print magazines. She’s performed in the bands Duet To-It, Huh-Uh, and Filthy Issue. Her most recent full feature film, Manos Returns, is the sequel to the 1965 cult film Manos: the Hands of Fate.

I love that horror encompasses so much. There are so many ways to explore the darker side of our psyches. Getting scared in a safe environment can be a thrill the same way a roller-coaster ride is. That’s fun for me. I also enjoy the imaginative side of it as well as the ability to explore social issues.

DP: What do you find more effective: gore or suspense? Why?

Gore can be fun. I enjoy the craft and the art of good gore. Watching it can be unsettling or humorous depending on how it’s done. However, there’s nothing else that can give you that sweating bullets feeling like well-executed suspense. Ideally, there would be a little bit of both.

DP: How do you like to scare your fans?

I tend to use ghostly images and sounds in my work. I like to be unsettling. It depends on what’s right for the project, but I’m really into unsettling audio when it fits.

DP: Manos: Hands of Fate has a huge cult following.  What is it like to direct the official sequel?

Manos Returns is the best thing I’ve ever been a part of and I’ve been a part of many amazing projects. I’ve loved working with everyone involved in the movie. We’ve become a family of some sort and have had several get-togethers since. Everyone went above and beyond to make the best project possible with limited means. It was exciting to work on location in an actual old haunted building. I was great working with the cast and crew. We really tried our best to capture the feel of the original while creating something modern and enjoyable.

DP: Do you have plans to make more sequels to Manos?

I joke that my next movie will be Manos Returns, Returns. So far, there are no plans for another sequel. This sequel is all because of Jackey Neyman Jones. Jackey played Debbie, the little girl, in the original film. If Jackey wanted to do another sequel I would definitely be on board.

DP: Which role has more creative difficulties, writer or director?

It depends. Writing is more of an independent process and directing is more collaborative. When I’ve written, aside from Manos Returns and Just a Prick, I haven’t had to answer to anyone or check in with anyone. When writing I can just let my imagination go and write whatever I want. When directing, there’s a whole room full of people and actors that you have to be conscious of. You have to understand the limitations of budget and ability or a number of other factors. With directing you are much more limited and you often have to adapt creatively as well in order to reach the vision that you originally intended.

DP: What director has influenced you the most?

John Sayles. John Sayles has such a great way of making anything seem natural no matter how far-fetched a story might be. He somehow presents a scene about aliens or supernatural creatures with the same ease as a scene with two friends talking or a character self-reflecting. I’m convinced that he can do anything film-wise. My other main influence would be Jean Cocteau. I’m a big fan of his early practical effects, his surrealism, and his fantastic imagery.

DP: When did you choose to become a film maker?

I went to a vocational film school in 1999. I knew that I wanted to do something arts-related and was interested in that program, but I wasn’t sure that I could do it. While in that program I discovered a passion and an adeptness for film and video production that I hadn’t ever had before. I knew that I wanted to create films for the rest of my life.

DP: What future project are you excited about?

I’m excited to finally go into production of my feature horror film Raw Meat. I’ve been working on it for a number of years but have had to push it back a number of times due to deaths in the family. We’re going into production this Spring. A number of cast and crew from Manos Returns and Just a Prick will be involved. I couldn’t be happier about that. Raw Meat is on one hand about relationships between people and on the other hand, it’s about a relentless killer who has no skin.

I’d like to thank Tonjia for taking the time to become the latest Comrade In Horror. Her latest film, Just A Prick, will be released in February, featured in this year’s Women In Horror Blood Drive PSA.  You can find out more about Manos Returns on the film’s IMDB page.  You can also learn more about Tonjia by visiting her website and official Facebook page. 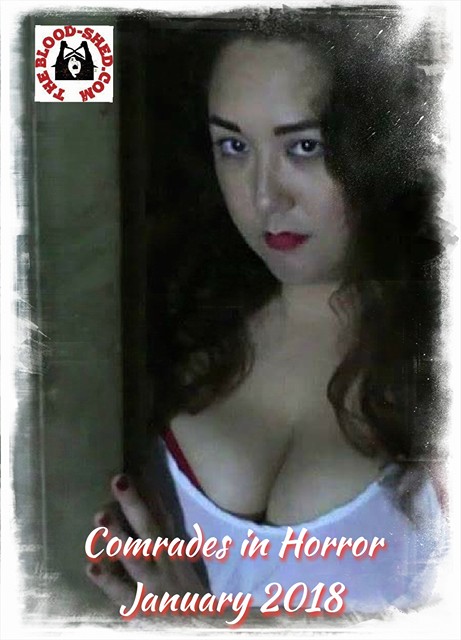