"Their fingers nourish, one by one." 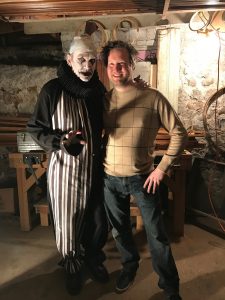 Ok, so just going with the tagline from the movie poster- wow! Haynze Whitmore’s feature debut, Crepitus, is going to be a crazy horror ride, which highlights the incredibly creepy Bill Moseley, as a child eating clown. It doesn’t get more horrific than that! This film with the “worst clown in town” may even be too graphic for your average horror fan. But don’t think that’s gonna stop me or any Bill Moseley fans. We love to be scared- bring it on!

If unbelievably you don’t know what Crepitus is about- here is the synopsis: Seventeen-year-old Elizabeth and her younger sister Sam are thrust into circumstances more terrifying than life with their abusive, drunken mother when they are forced to move into their deceased Grandfather’s house. Frightened beyond belief, they are forced to learn horrible things about their family history. Never mind the ghosts in the house, there is something far worse that takes an interest in them … a cannibalistic clown named Crepitus.

Crepitus, which filmed in Cheboygan, Michigan, is finishing up in post-production and hopefully will be released soon. In the meantime – I got a chance to talk to director Haynze Whitmore about the film that will soon be keeping us all up at night! 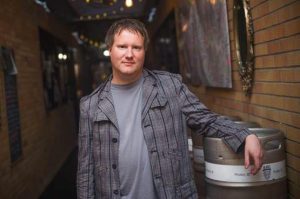 Los Angeles Zombie Girl: Hi Haynze! I know we are here to talk about Crepitus– but let’s start with you. How did you get started in horror films?

Haynze Whitmore: “I would say Mad Max 2 (Road Warrior) influenced me to be a filmmaker, but as a teen, I saw John Carpenter’s “The Thing” and to this day it is my favorite Sci-fi/horror film.  I had (and still have) an overactive imagination growing up, so anything involved with the supernatural or the unknown; would always get my complete attention. It’s funny because my favorite movie of all time isn’t a horror film but a French film called “City of Lost Children” by director Jean Pierre Jeunet. It’s a masterpiece! It has a unique story and splendid visuals.”

LAZG: Where did the concept of Crepitus come from?

HW: “The concept of Crepitus came when myself and Eddie Renner were sitting in a local Cheboygan, Michigan cafe. We were thinking of doing a film with a few characters and a simple budget. I mentioned to Eddie, I wanted an ice cream truck and a creepy clown. Well, Eddie and his wife Sarah rolled with it and after nearly four years and some re-writes, we started working with producer Lance Paul to bring it to screen.  It was a learning experience I’ll never forget.”

LAZG: I think most horror fans know that there is a evil clown movie coming out, starring Bill Moseley, but for those who don’t, what is the movie about?

HW: “The film is about survival. Two children, Sam and Eli are trying to find a way out of an old house where their abusive drunk Mother keeps them prisoner for a not so pleasant, neck popping clown named Crepitus. He craves little children’s fingers and has Jed (his ice cream man) kidnap children in the nearby playgrounds. The plot thickens as the viewer will discover that Sam and Eli are not ordinary children.”

LAZG: What makes Crepitus different from all the other clown horror movies?

HW: “Crepitus is a bit darker.  He doesn’t have the sense of humor that other horror clowns have. I wanted the film to make you feel creeped out throughout the whole thing. Of course, Bill’s delivery made him extra creepy and makes the viewer want to know more.”

LAZG: Who or what is Crepitus? Is he based on anything?

HW: “I was getting ahead of myself in the last question. LOL. Crepitus is a cursed soul from his heyday in the 1910’s.  He has been cursed by a fellow performer to live an eternity with rage and cannibalism. No one knows for sure, what he is, but it will be touched on in future Crepitus stories.”

LAZG: What made you decide to cast Bill Moseley as Crepitus?

HW: “Myself and Eddie were bouncing around ideas on who to cast. Deep down we both wanted Bill, as we loved his characters as Otis and Choptop. We thought to ourselves, well he hasn’t really played a clown so we got a little extra in our budget to cast him as Crepitus. We were excited that he liked our script.”

HW: “It was great working with Bill! He was open minded and helped guide the production as this was my first feature film. I remember the first day on set, me and Bill were like on 1 hour of sleep because of travel delays. You know when you don’t sleep much and you are working with someone you admire, your mind can go into hyperdrive and confusion mode.  Thank God for my crew and several cups of coffee. I didn’t know how that day was going to turn out, but we got through it.”

LAZG: Tell me about the rest of the cast, it’s not just Bill. They all look amazing in the trailers!

HW: “Eve Mauro, Caitlin Williams, Chalet Brannan and Lance Paul did fantastically! They all worked well together and I’m so proud. It was great rehearsing and watching their characters grow into their own.”

LAZG: What can you tell me about the “Making of Crepitus”? Amazing moments? Challenges?

HW: “The behind the scenes of Crepitus felt like a bunch of friends trying to make a really scary movie. You would think that having this crazy clown idea would be unsettling but we were really just having a blast. One of the coolest parts for me was when I had Bill just improv the scene with little Sam in the bedroom. This is the first time she encounters Crepitus and the script originally didn’t have any lines. We had a clown doll in the room and Crepitus hides at the foot of the bed saying corrupted rhymes. I was behind the camera with my mad scientist messed up hair saying “Excellent! Excellent!! That was really Christmas time for me. A greedy kid that opened his present. LOL.

As for challenges, I would say the biggest challenge was to shoot the entire film in 15 days. That was a bit exhausting.”

LAZG: I’ve heard, and can see from the trailer, that it’s a pretty graphic film. Do you think even some horror fans could be turned off by it?

HW: “Maybe? Maybe not. The film has its moments and the sound and music will add an entirely different element to it. It’s graphic in a sense that it is a bit violent, but not overly gory. Just the right amount of blood. Crepitus is really about the feeling you get watching the film rather than a gore show.”

LAZG: The film is in post-production now. When do you think it will be finished?

HW: “The film itself will be finished at the end of January.  We shall see when distribution wants to release it to the masses.” 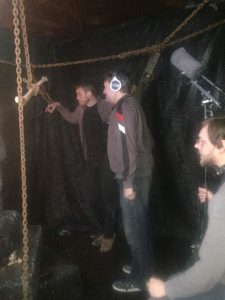