"The Cure is just the beginning"

The Cured, David Freyne’s feature debut, is a terrific film. Yes, I do enjoy zombie movies by default, it’s in my name, but I haven’t loved every one of the undead movies in the genre. This is not just a horror flick dealing with gory body parts and monsters crying out for brains. The Cured is truly different and that made it a fantastic and heart-breaking watch for me! It is a compelling tale, especially under our current world political state.

Starting where other zombie films end, The Cured takes us on an intimate journey into the life of Senan, (Sam Keeley) who having been infected with the MAZE virus and lived a horrific life ripping people to shreds for many years, is no longer infected and is released to live in the general public again. The socio-political thriller is set in Ireland during the aftermath of a zombie type apocalypse. Seventy-five percent of the infected population have been cured, leaving twenty-five percent still fighting to get well, At the same time, the entire world is trying to recover some semblance of normal after years of the apocalypse. Easy right? Let’s just all go back to normal. Not gonna happen. 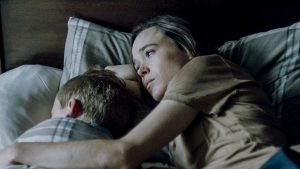 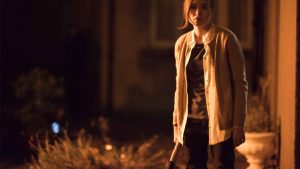 Is it possible for the infected to be forgiven for acts that were done outside of their control? In this very thought-provoking film, we experience a story that is a metaphor for many such situations now and in history. Humans, in general, have not shown themselves able to move on and be excepting of change. Not very quickly anyway. The Cured is a very relevant film for today. For example: most of us can’t handle the thought of a sex offender, or even worse a serial killer living in our neighborhood, no matter whether they are deemed “cured”. This situation is very similar. Racism, sexism, xenophobia are all serious problems and if you mix in the need to forgive people that you perceive as murderers in a post-dystopian world already upside down, one can see how hard it would be for both groups to move on successfully side-by-side. The once-infected are discriminated against by society and their own families, which causes serious social issues to arise. This leads to militant government interference and a lot of violence on both sides. 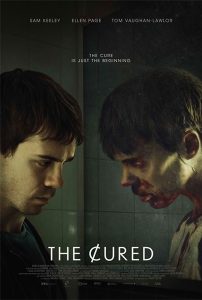 The acting is phenomenal in The Cured and I love star Ellen Page! But, what makes this film amazing for me is the character of Senan, played by Sam Keeley. Senan is a guy trying to come to terms with what he did while infected. Even if everyone in the uninfected world was ok with him being among them, (they are not) he has trouble living with the guilt of his actions and his life continues to be riddled with nightmares. Just as Frankenstein did, it’s tragic when he realizes the monster he is. In this film, the cured remember all the horrible things they did and must live with it every day. Some of them seem to be able to move on and feel no remorse, but none of them will be able to pick up the life they left behind. There was too much carnage, too much violence. Especially since many of them hurt people close to them.

Senan seems to carry the past heavier than most, and for spoiler reasons, you need to see the movie to see why. He is taken in by his sister-in-law Abbie, played powerfully by Ellen Page, to live with her and her small son, her husband having been killed during the siege of the city. Their relationship feels real and their performances are incredible.

The film brings us a very politically charged story and I would fail if I don’t describe the world in which Senan and other former flesh-eaters, including the politically ambitious Conor (played menacingly by Tom Vaughan-Lawlor) find themselves. Conor’s sense of entitlement increases his disillusionment with society’s treatment of those cured of the infection, leading him and a few others, from a support group for recovered zombies, to form an activist group whose goals and actions quickly shift them from political to incredibly violent insurgents.

The military is everywhere and is constantly harassing the cured. There are chain link fences separating the cured from sign-carrying protestors and incurable zombies are trapped in a prison where a doctor (Paula Malcomson) tests them for a new antidote. The anti-cured graffiti tagged on walls and doors alongside propaganda posters, feel reminiscent of George Orwell’s 1984 and really add to the feeling of impending mayhem. 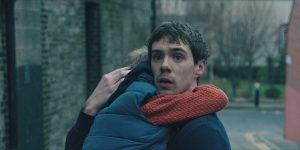 The Cured is a beautifully made film on a very small budget! I can’t wait to see what David Freyne could do with more! This film is not really a horror flick, more a psychological thriller with a little 28 Weeks Later zombie action thrown in. A passionate movie like this can open a lot of doors for a director and I hope we see great things from him in the future. Especially for us horror fans! With an open-ended finale- (that made me a little crazy) I am hoping for a sequel to The Cured!

One thing I have to mention- quite a few times during the film I had to yell out loud- “No, don’t leave the door open!” If I am ever in a zombie apocalypse for real- I will never leave a door open behind me! Never! This is one of the biggies I have learned from horror films!

The Cured will be out in Theaters and VOD on Feb 23rd! Check out their Facebook Page for more info!