Cutting Through The Pages #2

So, it’s been awhile since I’ve talked about comics. As I’ve said before (to anyone I can corner), I love comic books. It’s surprising I don’t talk more about them on the site, actually. Well, it’s time to remedy that! Here’s a new list of comics that deal with the macabre, the whispers in the darkness, the things that go bump in the night…you know, horror comics. I’ve personally read every item on this list, so I know what’s up. Trust me…please? That’s all I really want, for you to trust me…oh, right, the list. Here it is! 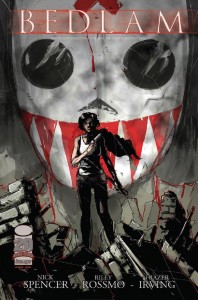 Tell me something…what do you think would happen if “The Joker” became reformed & wanted to use his experience in crime to help people rather than mercilessly slaughter them all? Stop right there, because thanks to Nick Spencer, you don’t have to. Bedlam tells the story of a villain named “Madder Red” (who I would argue is more Joker-like than The Joker has been lately) who, after having his death faked, becomes reformed thanks to the help of a mysterious doctor & decides that he wants to help the police find criminals using his prior criminal knowledge. Being the best criminal who ever lived, he proves that he’s more than a match for any newcomer trying to terrorize his city. The kicker? The police have no idea that he’s actually Madder Red (he always wore a mask back in his criminal days). A great story coupled with fantastically eerie & gruesome art by both Riley Rossmo & Ryan Browne, this is definitely a series you want to stick your knife into (or, you know, whatever your weapon of choice is). Unfortunately, it was cancelled after about 11 issues, which is a real shame. Still, what is out there of this series is really good. One of my favorites of the past five years. 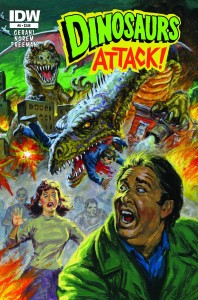 I cannot begin to tell you how much fun this series is. I mean, like damn…why isn’t this a movie yet? Actually, Tim Burton was supposed to direct a live-action movie based on Dinosaurs Attack back in the early ‘90s, but then Jurassic Park came out &…well…history was made. There’s so much glorious gore, crazy dinosaurs (with cameos by a few famous movie dinos like Godzilla & The Beast From 20,000 Fathoms), space, a murder mystery, & even Dinosaur Satan. You read that right. Dinosaur. Satan. DINOSAUR. SATAN. It doesn’t get much better than that. What’s the story? Basically, this scientist in a space station makes a machine that accidently teleports dinosaurs from the past into the present & they wreck so much havoc. I can do it just by just talking about it, you’re going to have to just read it. The art is bright & bloody, the story is wonderfully cheesy, & did I mention Dinosaur Satan? If I could give this series 10 knives out of 5, you bet your ass I would. Get it! 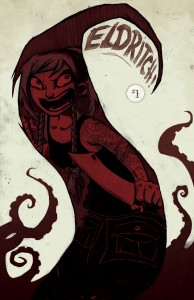 What can I say about Eldritch that won’t just sound like my last rant about Dinosaurs Attack? Well, for one thing, they’re nothing alike.  Eldritch is about a woman named Anya Sobczek (who has a badass evolution tattoo on her arm & knows karate & is just awesome overall) who finds out her little brother has been possessed by some sort of Eldritch abomination (ah, the title makes sense now!). Her investigation of how & why her brother is possessed leads her to a cult who wants to use their newfound abilities to take over the world & get revenge on their enemies. What makes this series great is how well done the characters are (especially Anya) & the art style the creators went with. It feels very Invader Zim like, & even has that same kind of humor sometimes. It’s easy on the eyes, & an interesting take on Lovecraftian lore. It’s well worth checking out at least once (though I’ve read it several times, so I’m pressuring you to do so as well…do it!).

That’s it! The second list of comics I’m demanding…I mean…suggesting you read. Next time I get the kick to talk about comics (which will be real soon, trust me), I’ll give you a whole new list to check out! Until next time!