The Past Should Stay Buried

What is a man to do if he moves into a new house, decides to put in a septic tank, and finds a mysterious box buried in the back yard on that very spot? Dig it up of course! And, what if there is a body in said box and lots, I mean lots, of money in there too? The indie film Digging to Death (formerly What’s in the Back Yard) by writer/director Michael P. Blevins answers this question, and sadly it does not go well. 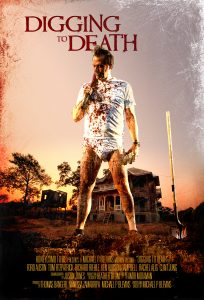 David Van Owen (Ford Austin) moves into a fixer-upper house after a divorce and gets much more than he paid for. Now right off the bat, you have to wonder why the realtor didn’t discover the many gruesome things in and around this house before it got sold, but that is never mentioned.

Plot problems like that could have been a deal-breaker in another film, but I had so much fun watching this dark horror comedy that things like that got forgiven. In an odd way, it reminded me of the TV show Shameless, which follows a family who always and consistently makes horrible choices. Even more so, I got the same sad feeling I got watching the very bleak, A Series of Unfortunate Events. He experiences the very same thing; every decision seems to be the absolute worst thing you could possibly do. David is depressed to start with and is an easy target for a supernatural takeover. Or does he just simply go insane? 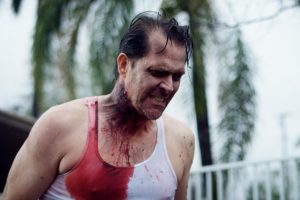 The reason I kept watching was that I really liked David and wanted him to succeed, even though in the back of my head, I knew that wasn’t likely to happen. Even with all the depressing things going on in David’s life, the film was oddly funny. There is a scene in the yard where he has completely fallen apart and is screaming at the dead body and yelling “Stop fucking with me” where I laughed so much! Watching David’s life shatter into pieces as he slowly descends into madness, was very entertaining. (sorry David) The chainsaw scene was bloody incredible (and regular bloody too) and would have made Ashy Slashy proud! 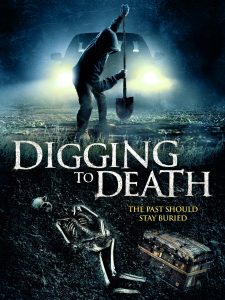 Actor Ford Austin did a stellar job with a simple and not terribly original premise. The film was practically all him. We see him go from just being a regular guy to a paranoid, deranged, obsessed psycho, who barely sleeps or eats, destroys his life, and everyone he cares about, all in an incredibly short period of time. It’s truly hard to watch him as he spirals out of control. I kept hoping he was really being haunted by the guy in the box and was not just having the biggest personal breakdown I had ever seen!

Here is a guy who has lost his marriage, is having a mid-life crisis, hates his job writing code for a video game company, and even though his boss dangles a promotion in his face every day, he doesn’t seem to have much going on for him in the future. His daughter still visits him, but you can tell she is moving on with her life and just feels sorry for him. His one friend Mark, (Ken Hudson Campbell) is just as pathetic as he is, so there is no one around to help him make better choices. 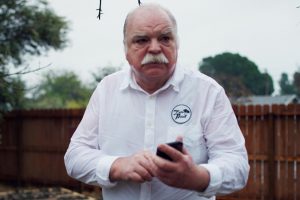 I had to wonder what I would do if I found a huge amount of money alongside a dead body.

I would like to think I would call the police and report my find and go on with my life, (hahahahahaha) and David tried to convince himself to do that too. But the money was just too tempting to pass up. In this backyard dilemma, the series of actions he takes, cause dire consequences, and we are left to decide if he is taken over by an evil spirit or is just a nut job. If I hadn’t seen what was in the basement… but nope I can’t tell you, you have to watch it yourself. 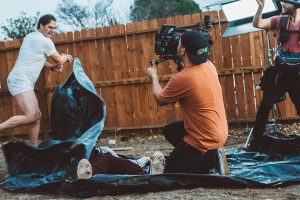 Another part of the film that was fantastic and must be mentioned, was Tom Fitzpatrick, as The Corpse, who I assumed was supposed to be the previous homeowner. OMG, he must have had so much fun, but at the same time been very patient to have to lay around so much. He had to get wet and muddy, but I loved his makeup and he really creeped me out! It was perfect! It was also fun to see long-time character actor Richard Riehle with a small part as the landscaper. In addition, Rachel Alig did a terrific job playing David’s concerned daughter Jessica.

While not a perfect film, and despite the obvious micro-budget, this horror-comedy is an insanely dark and satisfying watch. It had a much gloomier ending than I had anticipated, but it totally worked. I think you’re going to dig it. (Sorry, I had to.)  Enjoy finding out what’s buried in the backyard in Digging to Death!

DIGGING TO DEATH premieres on DVD and Digital June 1st, 2021 from Uncork’d Entertainment.