Doctor Who and Horror: The Jon Pertwee Years (pt. 2)

Spiritualism and bugs are prominent in this phase of the series

In its half-century history, the British sci-fi/fantasy series Doctor Who has crossed over with just about every genre imaginable.  Many of the best and most beloved episodes have strong overtones of horror.  In these articles, I’m taking a look at the most horror-centric episodes of each era.

A basic overview for the uninitiated: The Doctor is a Time Lord from the planet Gallifrey, who travels in time and space via a sentient ship called the TARDIS (Time and Relative Dimension in Space).  When Time Lords are dying, they have the capability to regenerate into a new body.  Thus, when one lead actor leaves the show, another can take over the role without violating continuity, and the show can go on more or less forever.

Doctor Who is generally discussed in terms of the “classic series” and the “new series” (although narratively the two are continuous with one another).  The classic series ran from 1963-1989, consisted mostly of half-hour episodes which formed serials ranging from 2 to 12 episodes in length, and contained the runs of 7 Doctors.  The new series began in 2005 and is still running, consists of hour-long self-contained episodes and occasional 2-parters, and is currently on its fourth Doctor.  In the interim between the two series, there was a TV movie made.

This entry will discuss the ninth through eleventh years of the series, which continued and concluded Jon Pertwee’s five year run in the role of The Doctor. 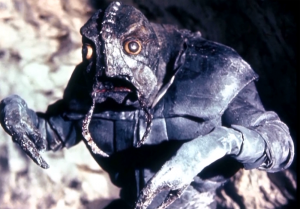 I wasn’t sure if I wanted to include this one. Baker and Martin scripts tend to be bizarre admixtures of ideas and elements, paying off in moments of spectacle that are can be impressive but are generally tonally ambiguous and thematically muddled. So, even where there are uncanny or eerie elements, it’s hard to pin them with the label of “horror” – or with any other label, for that mater.

But “The Mutants,” in amongst its commentary on colonialism and racism and its odd linking of spiritual enlightenment with environmental and biological factors, introduces a strand of body horror unique to the series to date; body horror will return in better structured, largely more successful stories (watch for one of the all-time greats in the next article in this series), but here it takes on a distinctive mystical dimension.

The story takes place on and around Solos, a planet with a two thousand year orbit around its sun and seasons that last five hundred years. The Solonians themselves are unaware of their own metabolic response to the change of the seasons. So they are caught as entirely off-guard as the human colonists who oppress them when their seasonally-triggered physical metamorphosis begins to occur. The Solonians start to develop into something along the lines of human-sized insects (is it because of Kafka that bugs are such a go-to for body-transformation narratives?), and, like just about anyone – or anything – feeling frightened and threatened, when they see no other recourse, they become violent.

Eventually, the Solonian mutation is revealed to be not only natural, but a step towards a further, transcendental stage. But their path to enlightenment is paved with horror. 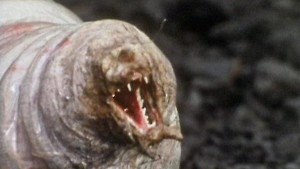 Bugs are back again for possibly the grossest Doctor Who story of all time. Toxic chemicals have mutated a local insect species, and their oversized eggs hatch vicious, two-foot long maggots impervious to gunfire. Maggots with teeth. Maggots that hiss. They’re pretty scary, and they are absolutely, gut-churningly repulsive. Eventualy, they mature into something akin to giant, slime-spitting dragonflies – objectively their more dangerous form, but not as thoroughly abject in impact, and not dwelt on nearly as much as the maggots.

There’s also a megalomaniacal computer called BOSS controlling people’s minds, so we’ve got two forms of dehumanization at work here: mechanization and the stripping away of free will. Conceptually, the deeper horror lies in the BOSS storyline, but those are ideas that the show has explored a lot better before and since – but those maggots, there’s not much else like them in popular culture, particularly what in is largely regarded as kid-friendly television. 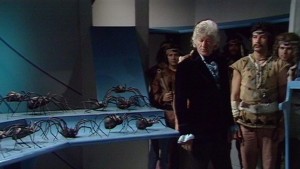 “Planet of the Spiders” (1974, six episode, written by Robert Sloman)

When I started writing this article, I didn’t realize how bug-focused it was going to be. Huh.

“Planet of the Spiders” is one of several Pertwee-era Doctor Who stories to deal with Buddhist concepts; not only was Eastern religion the “in” thing in Britain at the time, but the executive producer for these years, Barry Letts, was himself a practicing Buddhist. In this parable about the Doctor confronting his own earthly weaknesses before being reincarnated into a more enlightened form, a group of spiritual dilettantes are lead astray by giant, telepathic alien spiders seeking to reclaim a powerful crystal which the Doctor has stolen from their home planet of Metebelis 3 (he actually took it back in Sloman’s previous story, the aforementioned “The Green Death”).

The spiders are actually from the far future; when a group of colonists from Earthwere (er, will be) stranded on Metebelis 3 – the energy given off by the planet’s crystals has caused normal, terrestrial spiders to mutate into these monsters, which have enslaved the humans.

Mind control and false enlightenment are horrifying concepts in and of themselves. But attach them to giant, malevolent spiders, and the outcome is pretty intense by the standards of tea time viewing – especially for arachnophobes.

You like horror, don’t you?  Of course you do.  So keep reading The Blood Shed, and trek on over to our Facebook page!