"All dolled up and ready to kill"

Dolls aren’t for everyone, especially large collections of them, but in Dolly Deadly they become the main obsession of our demented little protagonist Benji. Most people think dolls to be pretty benign, with their plain emotionless faces, but the world of horror has brought so many scary dolls into the genre, that many people feel differently about them, than they might have without help from the movies. In my office I have a few dolls so unpleasant that my friends’ kids close the door when they come over. So when I heard about Dolly Deadly I was instantly intrigued. I love doll horror stories, but rarely do I see them done well. There are some are a few notable ones that are memorable. Chucky from Childs Play is the one doll most people think of immediately. The clown doll in Poltergeist and the little guy with all the teeth in Trilogy of Terror: all three are dolls we don’t want in our house. Also more recently, Brahms in The Boy and Annabelle in The Conjuring have been added to that list. One of my favorites, the one that started my love for sinister dolls, was the Talky Tina episode on Twilight Zone. It was a great revenge having the doll take out the wicked step-father, played by Telly Savales! 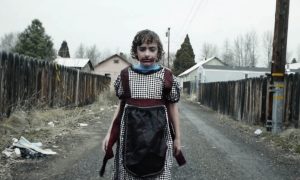 What I love about Heidi Moore’s Dolly Deadly, on top of this being a super creepy, dolly inspired film, it was also brought to us by a woman director (yay!) who with only a small production team, had her hands in almost every aspect of the movie, and made this comedic psychological thriller/revenge flick come to insane life! I love this bizarre and brutal movie! 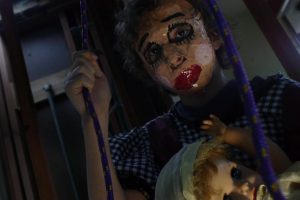 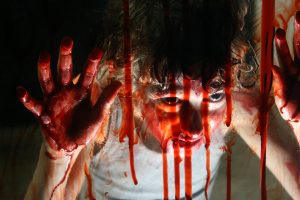 The story of Dolly Deadly revolves around the warped mind of 8-year-old Benji (played superbly by Justin Moore) who is terribly bullied and neglected. Benji lives in a world of his own and can only relate to his doll collection. The only way he can deal with the horror and violence in his life, is to slaughter the people who have hurt him the most. The film is a whirlwind of vengeful deaths by dollies, elaborate dream sequences, and crazy characters. Considered a horror comedy, some of the acting is very over the top, but for me that just adds to the campy 70’s/80’s feel of the whole film. Heidi Moore and Cassandra Sechler’s script was weirdly wonderful and the use of color in the film is probably my favorite part. It is a truly an extraordinarily vivid film. The unique animation, merged with the constantly changing lights, laughing doll heads, strange dancing and characters we aren’t sure are real or in Benji’s hallucinations, take us on a trip much like an old carnival fun house ride on LSD. I could imagine Jefferson Airplane writing a song about it!

So what brought little Benji to the point he loses his mind? The strange little kid never gets a break. His Mom wasn’t a prize, but at least she loved him. When he loses her to an unfortunate and really gory accident, the only love he finds is from her dolls, because unfortunately he gets none from the abusive grandmother that he ends up living with. Add to that neighborhood kids and grama’s useless boyfriend, who all bully him, the poor little guy is a mess. It’s hard not to empathize with him as we watch him go mad. Usually if a child is abused that badly when he is young, horror movies have them kill once, and then simmer for years, coming back for revenge as an adult. As it says in the trailer- “What doesn’t kill you makes you stronger. But what if, it makes you lose your mind?” Well with Benji, he does lose his mind, but once the killing starts, he doesn’t stop until everyone that hurt him is taken care of.

I admire Heidi’s ability to make everything work so well, even with a micro budget, and I attribute that to just a few basic things. First the practical SFX and props. No CG here- all the blood and guts, melting skin, and masks are all real. (Our young actor even made his own to add to the realism) Second there is Heidi’s amazing animation. Stop-action film making is becoming a lost art and Heidi does it incredibly well. Her background in fetish photography really shows her eye for the unusual. The disjointed, stop-action, claymation, puppets, and colors that make up Benji’s hallucinations seamlessly take us inside the head of an adolescent who psyche is slowly being destroyed. Third- I believed all the characters and liked the actors a lot, even if they weren’t perfect. The overacting worked in this case. And I especially liked Benji! It was obvious the kid worked hard on this film and we can’t help but want him to get the bullies. Lastly and very importantly is the music score by Kurt Dirt! So many cool things going on with the music, as it goes up and down like a carousel, and sound effects that keep the creepiness at a high point all the time. 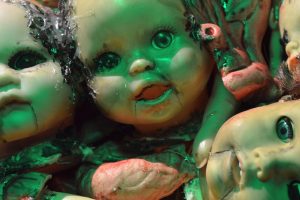 Dolly Deadly is available on BluRay/DVD combo from LeglessCorpseFilmsOnline, Amazon.com, and Vimeo on Demand. The film will also be available through major retailers and VOD venues later this year.

You can also get info about the film from WretchedProductions.com and on Wretched Production’s Facebook Page