E-Demon is yet another film in the found-footage, single-screen horror sub-genre. But even though it has been done before, I somewhat liked this newest entry into the genre. In real life, I am a bit paranoid about “Big Brother” watching me and yes, I’m still silly enough to cover up the camera on my laptop! Thinking there is a demon ready to take over the world via Skype- well, that’s terrifying! 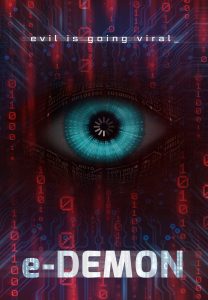 In these types of films, most of the acting can be done in a very short time. The bulk of the work being done in post-production, to make it look like it’s on multiple screens. Films such as Unfriended, Open Windows and Unfriended: Dark Web all have been popular at the box office, and the most recent film Searching has also done quite well bringing the small screen to the big screen.

If you haven’t seen one of these movies, the single-screen technique has everything that happens in various windows, all play out on one computer screen and that’s what we see. When done well, it looks almost unreal to someone like me who didn’t grow up talking to my friends on Facetime. It adapts the computerized visual language into a cinematic journey. I have always been afraid of my daughter and her peers being addicted to technology, and this film really digs into a few good reasons why it could be a dangerous thing to be doing. Can’t we just hang out in person anymore, or am I just paranoid?

E-Demon is the debut film from writer and director Jeremy Wechter. It brings us a similar feel to some of the other films but has enough unique twists and turns that it works as well as any of them. I hope we don’t get too many of these in the future, I think it is a very limited genre, but for sheer horror novelty, E-Demon is a fun film to join the found-footage family.

The Set Up– The film begins with a masked person telling us about The Quad Murders. He claims to know the truth and warns us that the material we are about to see is very graphic and disturbing! 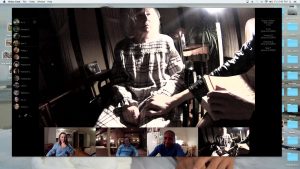 Cut To: A bunch of college friends. Kendra, Dwayne, Mar and AJ (Julia Kelly, John Anthony Wylliams, Ryan Redebaugh, Christopher Daftsios) AKA: The Quad, are having a little reunion via a group video chat. Some of these friends have a bad rep at playing pranks on each other, called freak-outs. So, when Mar shares that there is a cursed trunk in his attic that he’s decided to open, well, no one thinks it’s real. His Gamma had warned him not to touch it since there are things in there with a lot of bad ju-ju, because of the family witch. They should not have discounted his creepy Gamma; Mar and his family live in Salem, Mass and everyone knows about that history!

Unfortunately the trunk, of course, gets opened and unleashes all kinds of bad shit including a demon virus that possesses people instantly when your image is caught on video. Black magic has had to raise the bar to keep up with technology, right? This demon has now escaped its cage, has gone viral, starts possessing the friends and making them do horrible things. Each new person introduced into a scene is also possessed and the possessing flies through the city- each group possessing the next group and so on and so on. Before long, it could literally be the whole world unless you don’t use technology at all.

So, why did I say earlier that I somewhat liked it? I did enjoy much of it and it certainly kept my interest till the end.  The use of no jump scares was a huge plus. I liked the tension when all hell breaks loose and the friends begin to not trust each other. I thought the acting was pretty darn well done. They all seemed to care about each other and were genuinely horrified when things go wrong. There was real frustration because they were so separated across the country and couldn’t do anything to help each other.

I liked the presentation on the computer screen. You really had to watch what was going on, especially across the bottom of the screen. Minor subplots would open up when the characters started doubting each other. Some opened little side chats to talk shit about each other and I loved one of them looking on Google for “How to Fight a Demon”. 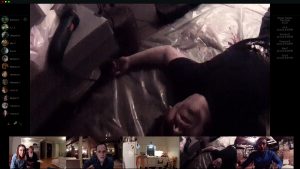 My biggest problem was the actual technology itself. Again, I am too old to really know how it all works, but how are they constantly moving from room to room, to outside, to basements, switching from computer screen to headsets, with such ease? Wouldn’t there be Wifi problems? Or lack of Wifi? Did everything they used have 4G? I have Wifi problems all the time and I’m not running from a demon. Seems like connection would have stopped some of the possessions- or they could have just stopped the video session. But that would end the film, so that didn’t happen. I caught myself wondering about things like that instead of paying attention at times. Another thing that bothered me was when one of the characters disappeared and never returned. Where did he go? I kept thinking he’d be back. His storyline just was dropped.

Last problem- the mythology. I realize it is fiction, but the mythology needs to be consistent. The demon possessed people in so many different technologically-based ways, so fast. It seemed like it changed to fit the next scene. That left me wondering was it a demon, multiple demons, or what? I guess it was just a super smart demon with the ability to adapt incredibly fast.

I liked E-Demon as well as I have the other found-footage single-screen flicks out there. I especially liked this one’s unique and fun end credits- kudos! My final take on this film is that if we use technology too much, we will all eventually be sucked into a world of evil somehow. So those of you that don’t own cell phones, computers, or watch TV are probably all safe. I guess I’m in trouble, and now, since this is on the internet, you are too! Bwahahahaha.

E-Demon had its theatrical premiere today in Los Angeles (September 14th) and is available everywhere else via Video on Demand.