Just in time for Valentine’s Day is the perfect zombie rom-com! Eat, Brains, Love surprised this zombie girl, with its gloriously gory laugh-out-loud antics! I never thought a zombie film this funny, could also be romantic! Making its theater and global VOD premiere on this day of romance is perfect – and I suggest all zombie fans and gorehounds, nibble on this film with someone you love! 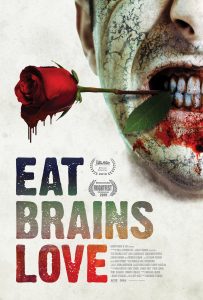 Synopsis: The good news: Jake’s dream girl, Amanda, finally knows his name. The bad? They both contracted a sexually transmitted zombie virus and devoured half of their senior class. Now they’re on the run from the government as they search for a cure, all while weighing up the existential question of who really deserves to be eaten alive.

Though not a perfect film, I think this is one of the best zombie comedies I’ve seen in a long time! Eat, Brains, Love is up there with Warm Bodies, Zombieland, Shaun of the Dead and Idle Hands. Not a big surprise because the director who brought us the latter of those films, Rodman Flender, is the director here again! 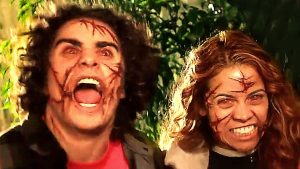 What makes this zombie film work while others don’t? Good characters that you can’t help but care about, tops the list. Jake Stephens (Jake Cannavale) is a stoner who has no plans to do anything with his life. He spends most of his time fantasizing about what it would be like to get with the hottest girl in his school, Amanda Blake. (Angelique Rivera) Amanda and Jake have nothing in common and would, in normal circumstances, never get together – but today is not a normal day. It turns out Jake and Amanda both have a sexually transmitted zombie virus and now want to eat all their friends. As if high school wasn’t hard enough already! Both of these actors were terrific as the horny and hungry couple.

Another character I loved was Cass, (Sarah Yarkin) a psychic teen given the job of finding the zombies, by a secret government agency, the NCD. Necrotics, as the zombies are called, can’t get away from her creepy white eyes. She was cute, quite the smart-aleck, and when she gets into Jake’s mind, she sees a basically nice guy that causes her to get a bit of a crush on him. Oh no, now we have a zombie-human love triangle! As Jake and Amanda try to run from the government that wants to make them into zombie slaves, Cass starts wondering what side is the right side to be on and ends up helping the hungry cannibals.

I also loved Patrick Fabian as Alastair. He was the perfect unlikeable bad guy from the government and gave us all a reason to cheer for the necros! Everyone in the cast was fun and many even had manners, which helped make the rather gory munch-out scenes a bit more palatable. I mean, what other zombie flick has zombies using the sexual offender list to get baddies off the street while quenching their hunger? And using napkins!

A good script is another reason this film worked. The screenplay is penned by Mark Herro and David Strauss, based on the zombie road trip book of the same name from Jeff Hart. The script has good comedy timing that was executed expertly by the cast.

A lot of blood was spilled and the SFX were all well done. I wouldn’t love this film if it weren’t. All the wounds and dead bodies were beyond over the top, but the humor from the undead herpes victims had a great balance that gave us lots of laughs to even out the huge amount of bloodshed!

Eat, Brains, Love is a zombie film with heart and soul, that will make you fall in love with zombies again! Don’t try to take it too seriously- just enjoy it for what it is!

Here is a list of all the places you can stream it. ENJOY!
iTunes, Amazon, FandangoNOW, Google Play, Microscoft Xbox, Sony Playstation, Vudu and Redbox