“She looked all elfy.”

Oh, you naughty elves, I so wanted to adore you, but except for the first few minutes that I actually really loved, Elves the movie was ho, ho, horrible.

Elves is the sequel to an equally underwhelming film called The Elf. The premise of the most recent film is not especially new. If anything, it reminds me of all the Truth or Dare movies (of which there are three, just in the last few years) mixed up in Santa’s hat, tossed into the air like tinsel, coming back tangled and impossible to separate into a cohesive film.

The film starts out with a little vignette with two brothers, that was dark, sinister and well done. Maybe that should have been a horror short and left at that. I liked it, complete with the little CGI elf face on the oh so naughty brother!

From there it changed to a different film altogether and we are introduced to a terrible game played with a truly creepy elf doll, called The Naughty List. This game has rules very similar to Truth or Dare, and when you add in possessed elves, and someone in a Krampus mask, no one playing the game really has a chance unless they can trick someone into playing and get the elf out of there. 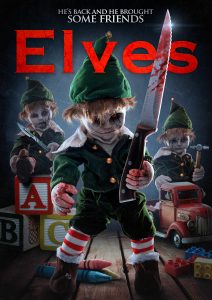 Official Synopsis: The Holiday Reaper, a ruthless killer that terrorized a small Texas town, has been caught. While celebrating, a group of friends find an elf inside a magical toy box.  When a freak accident kills one of them, they discover a group of elves has been scattered throughout town, each representing one of the seven deadly sins.  It’s a race against time to survive the elves’ wrath before Christmas ends.

Wait what? I am a horror lover and indie movie fan, so I am willing to find the best in every horror flick, but I really got confused and lost in the storyline. Nothing was really explained very well. There are elf dolls, the Naughty List game, a serial killer in a mask and there was also something about the seven deadly sins. Sorry I had trouble figuring it out. There were a few interesting kills, and a few silly ones, so yes it’s a horror film and I think it’s a comedy? I could be wrong.

In my quest to always find something I like in indie films, I will say the first five minutes was really great, the CGI elf faces were strange and interesting, I liked the Krampus mask and my favorite line ever was “I’m going to shove a stocking so far up your ass that you’re going to be whistling Jingle Bells through your teeth.”

So as far as The Elf or Elves go- I’m gonna pass seeing them again. I think I’ll go do naughty things with my Elf on the Shelf!

But- that being said: It is the holidays and it is a Christmas horror film- so if you are looking for a little movie to kill some time, or maybe to play drinking games with, check out Elves. Be good now- You don’t want to be on this naughty list!