Do you have what it takes?

Escape Room is a fast-moving thriller with a lot of potential, plenty of violence and adrenaline, yet surprisingly no real gore. This film will likely send people running to get their chance at an escape room near them! 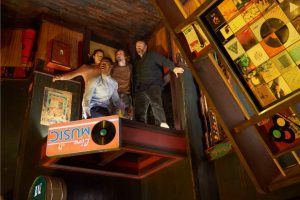 I love escape rooms. I’ve been to at least ten different scenarios and some I got out of in the time limit, some I didn’t. The concept is simple; We are put in a life or death situation and it takes some thinking and searching to figure our way out in an hour. I love working on the puzzles and looking for clues. It is a great use of brain power and can be very fulfilling. I also must admit though, I have gotten very annoyed at teammates who either didn’t take it seriously or were bad at it. They are usually just in the way.

In a case such as this film, they would either die or cause us all to fail. In real entertainment escape rooms, it’s ok, it’s just an innocent game. Even if we are locked in a prison, a serial killer’s house, a mortuary or in a room with a zombie, it is still just a game. In the film Escape Room – it is literally life or death.

Adam Robitel’s thriller Escape Room is a fun version of Saw in a twisted sort of way. Saw, fun, you say? Let me explain. This film is just as life or death as any Saw film, but without the gore. With a PG13 rating we see people die, but do not have the blood and guts to go with it. Being a hard-core horror fan, I’m not sure about that part, it takes away from the horror in a horror movie, but for the most part, I enjoyed this film. 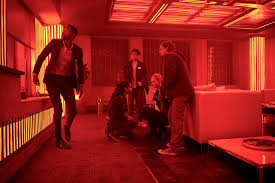 The film begins in a place that surprised me- it gives away immediately (or does it?) what kind of an antagonist we are dealing with, as we watch a young man try to get out of an elaborately decorated study. He is panicked, injured and running out of time. As the room closes in and crushes him, we realize whatever is going to happen, going forward, the cast better be good at puzzles.

One by one we meet the recipients of a package with an unusual box inside. Each person has to figure out how this puzzle box opens, where inside they find an invitation to an escape room at the mysterious Minos building in Chicago. With the offer of a $10,000 prize for the winner, they all accept the invitation.

No horror flick would be complete if we didn’t have the usual group of mismatched people, thrown together for reasons we will not know until later. We have the arrogant stockbroker Jason, (Jay Ellis) who automatically thinks he is charge, the super smart girl Zoey, (Tayler Russell) the dorky truck driver Mike, (Tyler Labine) the nerd kid Danny, (Nik Dodani) the athletic military hero Amanda, (Deborah Ann Woll) and the drunk young slacker Ben. (Logan Miller) Ben oddly enough is the guy from the study who was busy being crushed at the beginning. Maybe he’s not such a slacker if he got to the end?

In the real world of escape games, this would not be a bad group. Everyone has a different skill set, and that’s helpful in a game where you never know what will be asked of you and have no idea what the rules are. We have no idea why this particular group was chosen at first, and it’s interesting as they realize the game has been designed with each of them specifically in mind. They need each other to solve the puzzles, yet only one of them can win the cash prize. 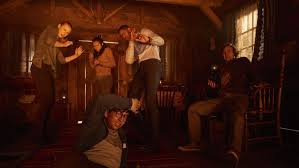 One of my favorite parts of this film is the set designs for the rooms. Remember this is inside of a huge building in Chicago and they will be going into some of the most complex and interesting escape room areas that I have ever seen. Now I don’t want a life or death immersive experience for real, but wow, I’d love to go to an escape room this beautifully designed.

The hapless players start out in what is obviously a waiting room. As they all settle in and get tired of waiting, they realize the game may have already begun. Luckily our nerd guy Danny has been to almost every escape room in the city and is their guide into how these things are supposed to go. At that point, things start getting hot, literally, and they almost run out of time in the very first room. From hot to hyperthermia, upside down to right side up, the participants in the ingenious, killing machine realize this is serious. Bits of their stories emerge, and we find out what they have in common. Their backstories are very detailed and there is an entire room dedicated to telling those stories. Figuring out that the designer knows everything about them and has used this to his or her advantage scares, yet begins to help them. All of them have suffered terrible trauma and loss, and the rooms take all those demons into account.

The stakes are high, and the action is intense. I dare not tell too much, lest I give away secrets that could spoil the experience. This is in no way a normal escape room and they all soon realize they are playing for their lives.

Escape Room manages to take a story about a trending fad and make it fun and suspenseful. How anyone could know so much about any individual that they could exploit them to this point is almost the scariest thing about it. Who is watching them, and how do they know the most detailed things about each of the individuals’ lives?

I am not sure how I feel about the end. Just as we think we know everything and will get the big reveal, it becomes obvious we are being set-up, exactly like the Saw franchise, for a series of sequels. I would hate that normally, but I really loved the clever rooms, the hint as to the next incredible escape room, and would not be against seeing more.

Escape Room is out on DVD and Blu-ray, which has a ton of bonus content and deleted scenes. I thought it was a pretty cool film. I hope you do too.