On the first full night of programming Friday, October 7th, the inaugural PHILADELPHIA UNNAMED FILM FESTIVAL (PUFF) set off a shock wave of weird and eclectic cinema at the ADOBE CAFE in the jaded heart of Philly. I was only able to attend the first full night of programming on Friday seeing if the continuing boom of genre film festivals would yield the same old cookie cutter blueprint or perhaps a mutation with a dark heart and unique voice. I was lucky to find a very fluid presentation blending local filmmakers with unique perspectives within a large upstairs hall out of a horror film. With a bowl of spicy corn chowder in hand and a beer at my lips, I made the pilgrimage up the dimly lit steps to the gathering of fans, films and storytelling reigned supreme.

Sitting back amongst the growing crowd, I had the chance to catch up with the two obsessed and driving minds behind this event. Speaking with them previously about PUFF on THE HORROR HAPPENS RADIO SHOW, the pair known for their talent in cultivating horror with writing, artistic expression and film, programmers Madeleine Koestner and Alex Gardner brought a sense of home to the fans as the shadowy lights, ample screen and reverberating sound engulfed the space bringing to life a lineup worth supporting. As with many first year film festivals, the word of mouth and social media were keen to the success and hopefully future growth. Why it was voyage to make it into Philadelphia, the trip was worth it with three features, a pack of bizarre short films, the dysfunctional family, the members of the PUFF and those doing the meat work assembled to support. 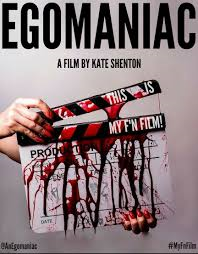 All weekend, the PUFF lineup was a blend of genre filmmaking that journeyed into unexplained places and experiences within the realm of fear, laughs and the human condition. Attending Friday only, I was lucky enough to see the whole slate of projects and I was not disappointed in any of the choices (but a bit unsettled by the shorts)! Some festivals over the course of an evening, a weekend or more will have some films you love, like and dislike. PUFF found the right beat with programming overall having a great reaction from the crowd. Friday’s lineup kicked off with the truly telling, terrifying and indie driven UK tale of EGOMANIAC by Kate Sheldon. This film was the most connecting to the crowd as the crowd understood the struggle, humor and spiral downward of the main character Catherine who wants the film of her dreams surrounding a zombie romantic comedy. Starting off true to herself and not willing to compromise her artistic perspective, we see Catherine slowly lose herself, vision and sanity to the film industry that is an all-consuming, non-caring machine that devours those willing to compromise. This screening was paired with the short film SONDER DURING END TIMES. After the pair played, we were able to network and catch up as I bumped into several social media friends and FANGORIA’s own Ken Hanley (both of us wearing Atomic Cotton t-shirts). 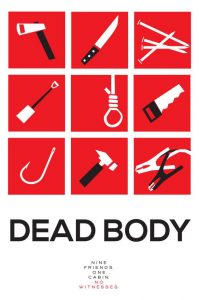 The next segment of the lineup was a block of truly experimental and bizarre short films that ranged between twisted storytelling in the woods to a very disturbing James Bell style visuals piece and a journey of women’s underwear that tells a truly unique story. The bizarre shorts block was followed then by the mystery thriller DEAD BODY by Bobbin Ramsey and preceded by the short film FANNIE THE FRUGAL FOODIE. If EGOMANIAC was a very disturbing love letter to the aspect of indie filmmaking and getting your dream off the ground that mutate into a deep seeded and obsessive nightmare, DEAD BODY was just as obsessive but also a hell of a lot of fun that kept you guessing even if you knew what was going on. It hooked the PUFF crowd as this story of a group of friends and school mates attending a weekend away at a friend’s cabin was cultivated through some very interesting characters, great gore FX, dynamite kills and the power of misdirection against the shadows of the forest canvas effectively using the lack of light. The final portion of the evening included a short film presented from an attending filmmaker and the very funny and disgusting SRS CINEMA film entitled NIGHT OF SOMETHING STRANGE. Playing a healthy amount of film festivals, this infection genre piece is directed by Jonathan Straiton who presented a cringe worthy and extraordinarily enjoyable tale of sexually-based zombie madness surrounding an infected janitor, the growing masses of STD infected undead, a group of friends and unlikely hero. Never taking anything serious at all, the film finds a formula that has made the underground and indie horror movement a staple of wonderfully low budget, hilarious and disgusting storytelling. We were also very lucky to have the director as well as the filmmaker/ producer Ron Bonk and actor Michael Merchant in attendance to talk to audience of PUFF shedding some light into this twisted tale, locations, FX, inspiration, sequels and the spin on this infection sub-genre of horror. 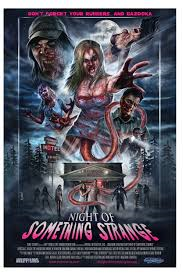 Overall, PUFF was just a lot of fun! As I wished I could’ve been there for the full weekend, I enjoyed the culture, community and selection of films on Friday night. With a lineup based on recommendations, entries and projects both Madeline and Alex had come across in the months of planning this event, I was not surprised at all by the great eye for quality films as well as the blend that really clicked. Why it was a pain to get to the location, the ADOBE CAFÉ was a solid location and a very cool hole in the wall venue. The varies locations overall I believe adds charm to the event as well as the fitting giveaways, raffles and promo items like the NIGHT OF SOMETHING STRANGE condoms. For a first time festival also, the overall presentation was rather good with no evident tech issues to really draw attention to as the crew who ran the event seem to be on top of everything and very social! We cannot say this for many film fests however. Besides the traffic coming into Philly, the lighting was an issue. The dim light was cool for establishing mood but not for taking photos or really having a clear picture of the upstairs room. With a festival like this, it is understandable though and as said on THE HORROR HAPPENS RADIO SHOW, bigger things are ahead next year. Come out and support growing and mutating events like the PHILADELPHIA UNNAMED FILM FESTIVAL (PUFF) and find out more for next year at http://philadelphiaunnamedfilmfestival.brownpapertickets.com/. 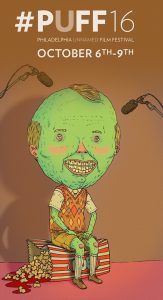