Fans of The Twilight Zone will be amazed by "The Fare"!

The Fare is a must-see film. Director D.C. Hamilton and writer/star Brinna Kelly bring us a mesmerizing Sci-Fi tale that is romantic, entertaining and incredibly mysterious. This film drew me in and held my interest until the very end. I honestly can’t say that about most romantic films, or even most films in general. An homage to The Twilight Zone, The Fare is a seemingly simple story, with simple sets, mostly just the inside of an old yellow checker cab, yet deeply engaging with much more there than you see at first glance. Heartfelt acting, amazing cinematography, and a fantastic script make this film work perfectly.

So why would this hard-core horror fan love it so much? It is so different from other films of this type and rather than just stay light, takes us to a very dark, yet satisfying place. 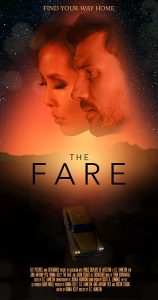 Submitted for your approval, The Fare. A romantic Sci-Fi that has become one of my favorite films of the year. Harris, a handsome taxicab driver falls for the beautiful Penny, who is his current fare. What happens now could only happen in The Taxi Zone! Sorry! Yes, I borrowed the quote from the ultra-popular Rod Serling TV show, because minutes into The Fare I felt like I had gone back into The Twilight Zone and since that is hands down my favorite show of all time, that is a very happy place for me indeed.

So, what is this film about? That’s the hard part. I can only tell you a little bit, without spoiling the story. The Fare is a film you want to go into with as little prior knowledge as possible.

Here is the official synopsis. When a charming woman named Penny (Brinna Kelly) climbs into his taxi, Harris (Gino Anthony Pesi) finds himself entranced. That is, right up until she disappears from the back seat without a trace. As he desperately tries to make sense of what happened, he resets his meter and is instantly brought back to the moment she first climbed into his cab. He and Penny find themselves trapped in an endlessly looping ride that changes their lives forever.

What a cool story! One that will creep up on you until you gasp at that OMG moment; that second you understand what is really going on.

The film begins in Black & White. With the saturation gone, I knew right away that this story was going to take us somewhere unusual and I wasn’t disappointed. As I said, it is an homage to The Twilight Zone. This film is sure to be a hit with fans of all genres, crossing over from Sci-fi, to fantasy and a little horror thrown in. 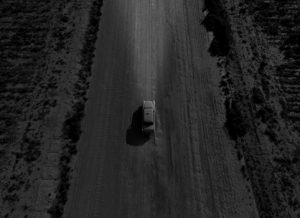 The film is shot with many old-fashioned techniques, straight from The Twilight Zone era, that give it the same moody feel as the classic TV Show. I know time loops aren’t a new thing, especially with Happy Death Day bringing it back recently. But The Fare is different, intriguing and romantic, which I hope will not dissuade any macho guy types out there. This is the ultimate date night film in every way. Hint, hint!

In my interview with the writer and star Brinna Kelly, she has this to say about the film. “I’ve always been a big fan of The Twilight Zone. I discovered it in re-runs as a kid, and I’ve seen every single episode a couple of times. I’m kind of a huge The Twilight Zone nerd and this is my love letter to that show.” 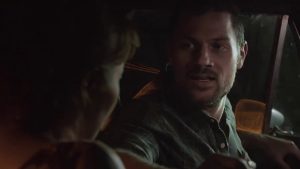 Overall, The Fare is an intelligently written, romantic sci-fi thriller with a dark edge, and is one of the best scripts I’ve witnessed all year. With only three characters, one of whom you never see, only hear his voice, (Jason Stuart as The Dispatcher) all the actors had to be on their top game. The excellent work of both cast and crew to shoot something this good in only 6 days, is amazing. They bring this story to a point where I will venture to say you will want to go back and see it again, to catch all the little details you missed the first time.

For more info on The Fare check their Facebook page for ordering information, or order directly from the Epic Pictures website.