A Festival of Terror Is Coming To Sacramento

On Saturday September 21st  several forms of horror are coming to Sacramento, California.
It’s time for the 13th annual Sacramento Horror Film Festival.  Two separate programs offer you an onslaught of shock and awe.  Legendary actors Tom Atkins and Traci Lords are just some of the actors you can see in the films.  The horror is tempting you, so come to the festival.

You can view the festival’s Facebook page as well as the official site for ticket price and more information about this venue.  There’s also some artistic events planned such as a poetry slam, slideshows, Burlesque shows for you to enjoy as well.  You’ll also get a chance to see the new film, 333 Illuminaughty.  There’s a screening set for 10PM.  Don’t miss this annual chance to be entertained and terrified.  Here is a list of the complete film schedule for the event:

4PM SHORTS PROGRAM 1
TRICK OR TREATMENT – HEALING OLD WOUNDS 8m55s
Dr. Calman is a therapist who’s clients have killer personalities. Trick or Treatment examines the healing that happens when we remove our masks. Featuring the horror worlds biggest stars together in group therapy. Starring Dan O’Brien and the puppets of Matty Austin.
Directed by Daniel O’Brien

MURDERCYCLE 10m20s
David gets what he believes is a great deal, a free motorcycle. Unbeknownst to him the bike has other plans and gives him the ultimate ultimatum…ride or die.
Directed by Tyler Turner

KISS ME MALIBU 4m
Horror-comedy film about the insecurities and overthinking that TV shows, religion, culture and belief systems create in us during male-female relationships and in courtship.
Directed by Mikel Arraiz

OLD BEGINNINGS 16m23s
Old Beginnings is a post-modern, tragic romance about a young couple trying to rid themselves of the past using an unorthodox and bizarre ritual as they rekindle their love.
Directed by Suni Khan

CEMETERY TALES: A TALE OF TWO SISTERS 20m
Set in 1949, a Hollywood star mourns the loss of her beloved sister on the one year anniversary of her death. When the truth of her murder is revealed, a surprise visitor returns. Time is running out. Will justice be served? Tick tock tick tock…
Directed by Chris Roe

PIPE 11m58s
When Pup, a young girl living on the fringe of a bombed out town, finds a dead body washed up on the beach she brings it home to give it a proper burial. But other people have plans for the body and Pup’s refusal to give it up brings hell down upon she and her father’s heads.
Directed by Max Isaacson

NIGHT CRAWL 8m40s
Two inmates tunnel through the walls of a hellish prison, only to find something more terrifying than death row.
Directed by Gregory Shultz

MY PSYCHO FAN 3m33s
A serial killer works in his studio. Until he’s disturbed by the visit of his biggest fan. The killer wants to kill him but changes his mind by discovering his admiration. Flattered, the killer offers him to see his studio. The fan finds himself doomed to admire the killer for eternity.
Directed by Loe Certano

URBAN SCOUT 10m
A group of inner city boy scouts set out for an overnight camping trip. What is meant to be a fun learning experience quickly escalates into a nightmare for them all.
Directed by Matthew Vaughan

SPLIT DECISION 14m44s
A young couple are at odds when their scary movie night is interrupted by a frantic woman in need. Tension builds around their heated debate – Imaginations run wild, emotions run high and tempers flare. Will they help her, or turn her away to the evil that lurks on the other side of the door? Split Decision asks the question: What’s your gut telling you?
Directed by Scott Riopelle

DINNER FOR SIX 4m42s
Maddy, a woman in her early 30s, hosts a dinner for some friends in hopes to be able to express her feelings towards them.. Unfortunately for the guests, her way of communicating is quite unusual.
Directed by David de Juan Navarro

HELIX 8m52s
To impress his girlfriend, Adam picks up the latest HELIX tablet to lend a hand in preparing a meal. However, the tablet is leading him to create something else…
Directed by Brian Mitchell

CYBOLICA 11m53s
In the dystopian 1970’s world of ‘superpredators’, the United States votes to reform the juvenile justice system by using young troubled males (mostly of color) as part of a plan to create a new type of weapon to aid the military. In the world’s most volatile penitentiary, three inmates work together to escape their chains and fight the lethal creature on the loose
Directed by Alex Greenlee

BODY SNATCHERS 3min20sec
Insect’s music video, which follows the dystopian tale of what happens when governments use religion and technology to coerce and terrorize their citizens.
Directed by Christopher Allan Poe Jen Badasci

HAZARD 5m32s
Jane’s car breaks down in the outskirts of a small-town, and starts to experience supernatural activity related to the town’s folklore.
Directed by Gario Cuevas

SNAGGLETOOTH 8m48s
All Mary-Alice wants is a puppy… But first she needs to get something straight.
Directed by Colin Bishopp

PLAYTIME’S OVER 10m48s
The only thing Dee loves more than classic horror movies is terrorizing the babysitter. It’s New Years Eve, Dee’s parents are looking forward to one of the rare nights without their angel. Little does Laurie, the new babysitter know, the fifty bucks an hour won’t cover the years of therapy needed after spending one night with Dee and her stuffed friends.
Directed by Tony Reames

THE MOOR 11m50s
Oliver has taken his daughter Heather to the moor to find a May Day celebration but when she disappears he believes a mysterious huntsman has snatched her.
Directed by James Everett

9:35PM SHORTS PROGRAM 3
ASIAN SHE – COMPETITIVE MOURNING 4m15s
A man stalks his prey on the streets of Los Angeles, but on this occasion picks the wrong person to mess with.
Directed by Kevin Beauchamp & Mando Lopez

AUDIOBOOK OF THE DEAD 2m19s
A young woman just wants to listen to her audiobook of Jane Eyre, but the book’s sinister narrator has other plans.
Directed by Lyndsey Bohlender & Sean Nichols Lynch

RAMONA 10m
A small town is changed forever on a cold morning in 1983 when a shocking, supernatural event occurs after a tragedy.
Directed by Nicole Harris

ACTUARY 7m
An android that can predicts people’s date of death is suspected of murder.
Directed by MK Hill

POLYBIUS 17m11s
Based on the urban legend, a teenage girl tries to convince the local Sheriff that a mysterious new game cabinet caused her brother to commit suicide.
Directed by Jimmy Kelly

DANTE FALLS 14m54s
With her parents away, spunky ghost caretaker Nova Dante must balance her work and personal life as she and her inattentive Shinto priest boyfriend accidentally release evil ghosts that threaten to take over the world.
Directed by Nancy Lin

THE CLAPPER 15m14s
A secluded, paralyzed woman is terrorized by a malevolent force that lurks in the darkness.
Alex Domenici

IN HER SHOES 5m
7-year-old June Kauffman is enchanted by a pair of red children’s shoes in a cemetery. The shoes lead her to an old crypt where she faces her worst fears.
Directed by Ray Kermani

333: ILLUMINAUGHTY
A distraught mother reaches out to the internet world searching for her two troublemaking daughters who went missing during their weekend trip to Vegas.
Directed by Michelle Nessk & Tonjia Atomic

GOOD GIRL 9m35s
A loving ten-year anniversary dinner hides the dark truth behind what this couple is really celebrating.
Directed by Wesley Alley

PINKI 10m40s
In a back street, a scrap monster makes a sudden lunge at a man. A pink-haired girl helps him, and their future is down to whether he remembers her or not. 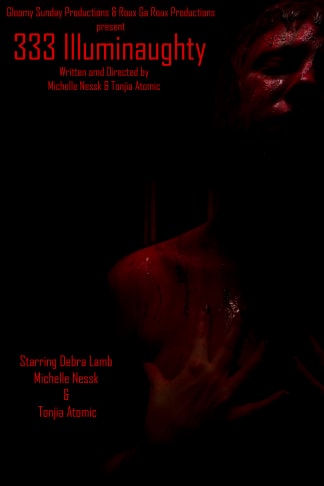 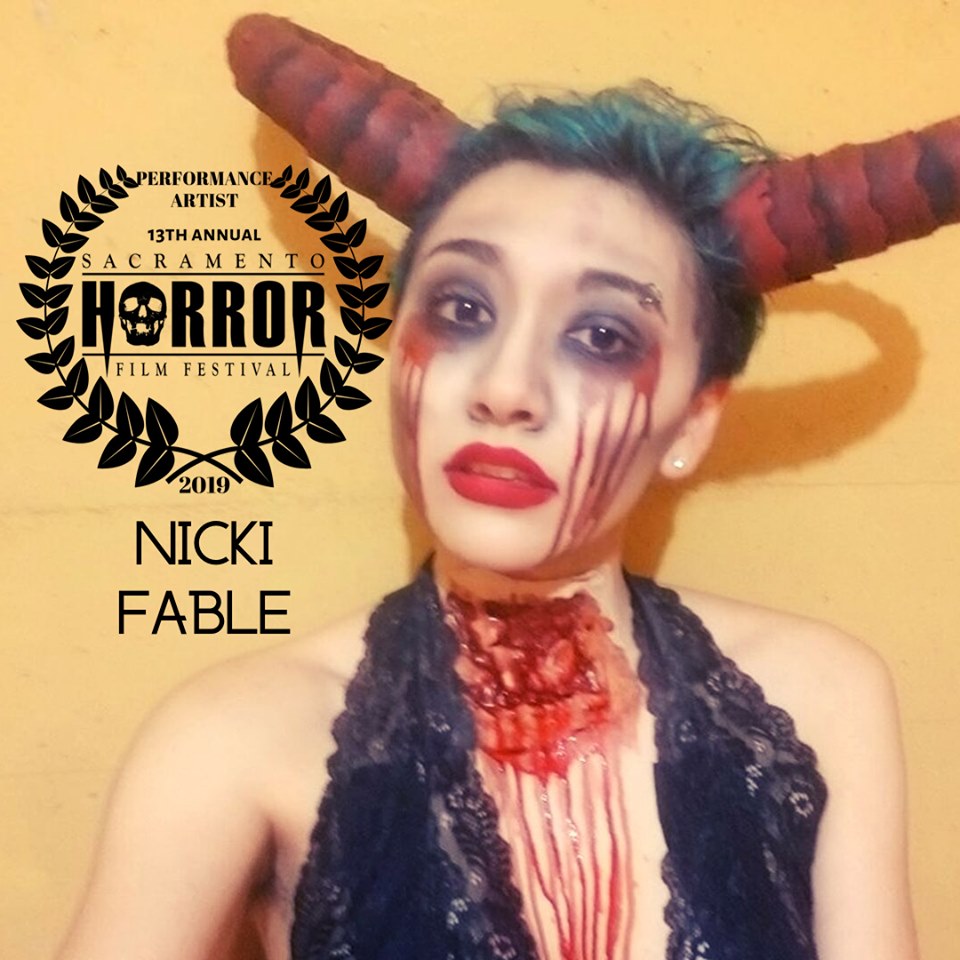