UNTOLD HORROR  Signed to The Wolper Organization at Warner Bros. 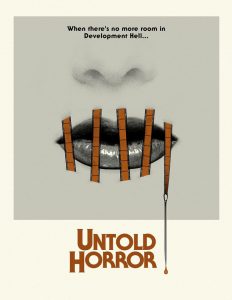 Untold Horror, the in-production docu-miniseries featured in the 2017 Frontières Buyers Showcase for works-in-progress, has been signed to The Wolper Organization at Warner Bros.  The Canadian production has entered into an exclusive agreement with the Los Angeles-based company to represent and develop the show. Executive Producer Mark Wolper will work in collaboration with Executive Producers Tim Sullivan of New Rebellion Entertainment, Garo Setian of Hungry Monster Entertainment and Allen Copeland.

Untold Horror was created by host/writer/producer Dave Alexander (former editor-in-chief of Rue Morgue magazine) and writer/producer Mark Pollesel. With additional partners director/producer Bob Barrett and editor/animator/producer Kevin Burke, the documentary series officially debuted as a selection in the 2016 Frontières film market. Dedicated to exploring the greatest horror tales almost told, Untold Horror will uncover the fascinating stories behind these stillborn films – as told by the legends who tried to get them made, reveal truths about the often tortured relationship between art and commerce, and find out what it would take to bring some of them back from the dead.

About The Wolper Organization
Under the leadership of David and now Mark Wolper, THE WOLPER ORGANIZATION has been responsible for over 500 films, which have won more than 150 awards, including two Oscars, 50 Emmy® Awards, seven Golden Globes, five Peabody’s, and recognition and retrospectives from Cannes and other respected international film festivals.  Recent credits include Bates Motel for A&E and the Emmy®-nominated Roots (2016) for The History Channel.

About Frontières
FRONTIÈRES is organised by the Fantasia International Film Festival, in partnership with the Marché du Film – Festival de Cannes, and is co-funded by the Creative Europe MEDIA programme of the European Union. Frontières 2017 is made possible thanks to our major partners: Telefilm Canada, the Netherlands Film Fund, Wallimage, the Nordisk Film & TV Fond, and SODEC.