"Jacob is having a bad day at school"

As a kid, I went to summer camp but was never forced to go to a boarding school. Living in a school far away from home did not sound very fun and I’m glad my parents didn’t decide to have me find out what it was like. I guess I wasn’t quite bad enough- or just didn’t get caught very often! LOL! 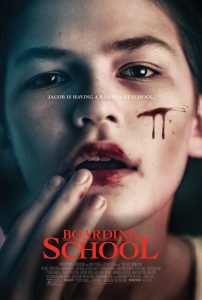 The school in the new film Boarding School, from director Boaz Yakin (Remember the Titans, Uptown Girl, Now You See Me, Fresh), is the kind of place that gives all the other boarding schools a bad name! The film itself is hard to categorize. Is it a gothic horror? Is it a thriller or a psychodrama? It’s set in the 90’s, what kind of movie is it? This film is hard to lump into one genre, but I really think it feels right as horror, and I liked it a lot!

The film covers lot of emotional ground, due to it being a project that writer/director Yakin put his heart and soul into. When I asked him in a recent interview what he hoped audiences would learn from this film he said, “I hope what they can take away from the film is that we need to embrace the things in ourselves that make us feel ashamed or make us feel weak. It’s only by embracing and owning them that you are going to be a strong and whole human being, it’s the root of our true inner strength. Pushing them aside will just leave you frustrated.”

I agreed with him. I felt like this film was very empowering to anyone that has been treated badly because they are different.

Boarding School tells the story of Jacob, a boy so fascinated by his recently deceased grandmother, who survived the Holocaust, that he puts on her dress and old records and dances around his house. When his step-father (yes, an evil step-father) catches him, he makes sure Jacob is whisked off to a school for wayward teens.

It isn’t long till we figure out this isn’t a regular school and things are going to go bad quickly. With only 7 students (all with different physical or mental problems) at this bizarre school, the headmaster Dr. Sherman, (Will Patton) and his “wife” (Tammy Blanchard) make up the entire school, and with the help of bible verses, the group is told they will “find clarity” and be cured in two weeks! Of course, the student body gets smaller and smaller very quickly and we soon find out some very nefarious secrets about our “teachers”. What will it take to survive this school year? 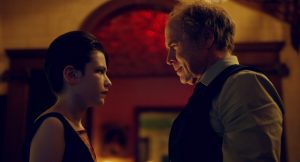 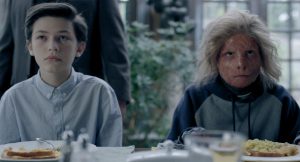 I enjoyed the entire cast, but in this coming-of-age film, the kids were really the ones to watch. Horror fans will recognize Sterling Jerins from The Conjuring, and our star Luke Prael (Eight Grade) does a great job as Jacob. Honestly, the entire group of kids was terrific while going along to some very dark, mature and crazy places. The house is really a central character too. Beautiful and gothic, I was sad to see what happens to it at the end.

Boarding School can be melodramatic and uplifting, yet overtly sexual and at times can feel like being in a nightmare. It does not fit in one genre category, but that’s ok. The ornate sets, unique story, well-done acting and great SFX make it worthwhile. I am not here to tell you the entire film since it came out today in theaters and on VOD/Digital HD- it’s up to you to get out there and watch it!