“Blessed is the man who stays steadfast under trial"

Toxic masculinity, home improvement, and revenge merge together to create the blackly comedic Girl on the Third Floor. Bodily fluids and other noxious things ooze from walls, spirits get revenge and truths are revealed. This house wants to give everything it’s got and that is some pretty disgusting stuff. 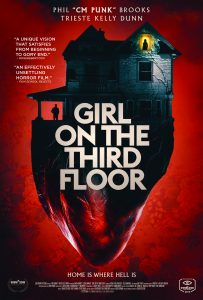 Home improvement has been big business on television and in films, but Girl on the Third Floor is definitely nothing like Fixer Upper– unless of course, Sam Raimi directed an episode! The dilapidated old house itself is unsettlingly cool, with the same wallpaper as my grandmother’s old Victorian. Exploring it visually is one of the initial creepy joys of the film. That is until we see the extent of what atrocities this house has in mind for the new homeowners!

Don Koch (Phil “C.M. Punk” Brooks) is not a great guy. After defrauding investors who trusted him, and getting caught by the feds, he is now unemployed and has moved far away from his shame. He and his pregnant wife Liz, (Trieste Kelly Dunn) buy an old house in the suburbs, and he goes there first to clean, repair and remodel the historic property. Liz has her own successful business and takes care of the cost, while Don in an attempt to salvage his masculinity, promises he is capable of fixing the place up without hiring anyone. 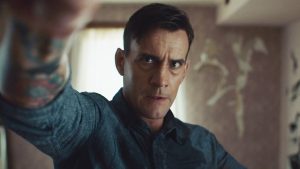 Perhaps they should have done a bit of research on the actual past owners before them. If they had, they may have changed their minds about wanting to raise a family there. Just like Don, the previous residents were not nice folks. The house has seen it’s share of prostitution, exploitation, sex slavery and bloodshed. The malevolent spirits that reside here are ready for some fun and retribution, and Don gets to be the recipient!

Many of the things that happen in this house are garden variety haunted house movie tropes, but in Girl on the Third Floor, writer/director Travis Stevens takes those ideas, adds a bit of humor and makes them darker, gorier, creepier and much more viscous. Right from the beginning, Don finds his new house to be dripping black goo from the walls and thick white liquid from everywhere else. In one of the first scenes in the film, his dog Cooper licks something off the floor that could be a combination of vomit and what leaked out of the condom that lies in the middle of the horrible mess. This film is not for anyone with a sensitive stomach! I gotta admit, I felt yucky a few times during the run time. 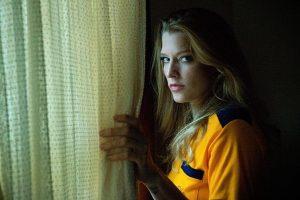 As I said, Don is not a great guy, and this house has seen so many men like him. Men who drink, lie, use women and feel no shame in it. He brings his dark past into a house that has seen too much and the ghosts are ready to do something about it. They tease at first, rolling marbles across the floor for us to follow around the house. More things ooze from the pipes and walls. He gets visitors and visions that tell the sordid story of the house; their aim to see what kind of guy he is. Don is tempted by a beautiful “neighbor” named Sarah, (Sarah Yates) and he fails that test miserably. Don fails to have any redeeming qualities and the occupants start to systematically destroy him and anyone who comes inside. The ghosts take care of things their own way, with hammers, razors and even the clothing dryer. 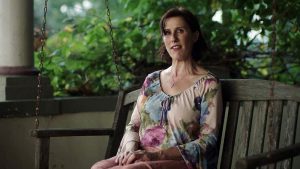 Don gets a warning of sorts from the locals in town. “The house seems to be bad news for straight men,” states Geary, (Marshall Bean) the owner of a local tavern. Pastor Ellie (Karen Wooditsch) his neighbor from across the street, won’t set foot in the house. Over glasses of whiskey on the front porch, she gives words of wisdom to Don and later his wife Liz, with quotes like “Blessed is the man who stays steadfast under trial.” Yeah, that’s not our Don. 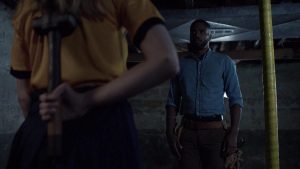 For a low budget film, the look is fantastic. The evil house is truly the central character and everything it hands out is crumbling, dripping and rotting, from the walls and pipes to the spirits who can never leave. The house was just as creepy during the day as it is at night. The camera takes us all over; upstairs and down, into small spaces, and sometimes inside the walls looking out. When we see what was built in the attic, we start understanding what a bad place this really was. 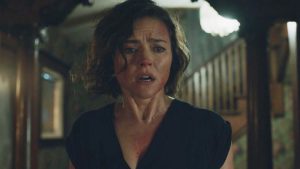 The acting was top notch. Don and Liz are not complicated people, but they were both full of surprises. C.M. Punk (Steven Brooks) the WWE legend turned actor, did a great job as Don, and when she got down to business with the ghosts towards the end, I really loved Trieste Kelly Dunn as Liz! The rest of the supporting cast was terrific as well.

Another “character” in the film was the nasty stuff pouring from every crevice in the house! All the goo, mucous and gore was super well done! When a marble becomes embedded in Don and moves its way through his body, I was yelling for him to stop; don’t use that razor, it’s your imagination!  The practical effects were very realistic and made this film work. 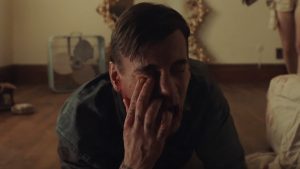 As the film goes on, we learn more about the house and its horrible secrets. At first, Don seemed capable, even likable, with a few campy moments reminiscent of Bruce Campbell in the Evil Dead films. But this protagonist is not a redeeming character and eventually, we don’t mind if he gets what the house thinks he deserves. Eventually, Liz comes to visit and takes things into her own hands, but that is something you will have to see for yourself!

My only problem at all, other than feeling a bit sick from all the mucilaginous goo, was that I was a bit confused about why Liz makes a certain decision at the end. She was totally bad-ass though, and that made her amazing!

Despite a couple of problems with the story, I really enjoyed the unique, tense and stomach-churning Girl on the Third Floor overall. Keep your eyes open for little things you could miss, just off the edge of your vision at times. The final scene was brilliant and made me laugh because it was the perfect ending! This goes into my collection as a favorite haunted house movie!

Girl on the Third Floor was released Jan 7, 2020, on Blu-ray and DVD from Dark Sky Films.