Gobble Gobble Motherf*cker: A Look Back At Thankskilling

In honor of  the holidays I’ve decided to look back at the one and only Thanksgiving horror film I could find. Suffice to say it was…interesting.  (Guys, I’m not gonna lie, this was a fun one)

The opening scene of Thankskilling is a close up of a nude pilgrims titties as a talking turkey murders her with an axe, and believe it or not, the film only gets stupider. Suffice to say, this movie does not do to cranberry sauce what Jaws did to the ocean.  But holy shit, is it fucking highlarious! The characters, the setpieces, the goddamned killer turkey; not since Troll 2 have I seen a film so wonderfully, disastrously awful.

You can get pretty good feel for what your getting into with Thankskilling just by looking at the DVDs cover. 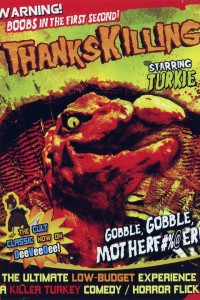 There is indeed murderous poultry, copious nudity, and a low, low budget. $3,500 hundred dollars to be exact, or the yearly salary of your average Philosophy major. To that end though, the effects are surprisingly not horrible. The turkey is obviously a bad puppet, but the gore is appropriately nasty. As this film demonstrates, a couple hundred dollars of practical effects can look better than a couple hundred million dollars of cgi.

The same praise cannot be lavished on the acting which is universally terrible but absolutely fucking highlarious. Highlights have to include the Chief Wiggum like Sheriff (“Goddamn Cheryl, that coffee tastes like shit!”) and the obese redneck Billy who gets his own musical number. You heard me right, a motherfucking musical number! It’s just as wonderful as you would imagine.

And it’s just so freaking funny! The dialogue is repetitive, poorly delivered, and often gut bustingly highlarious. These aren’t witty antecdotes being tossed around; it’s humor at its most raw, and at it’s stupidest. Really, it’s hard to explain the appeal. These are jokes that need to be seen first hand to understand the drawl.

And I absolutely recommend you go see Thankskilling right now. Truth is, if you’ve made it this far into the look back, this is almost certainly the type of film that will appeal to your tastes. If your anything like me, it’s a hell of a lot better than having to spend Thanksgiving with your family anyway. Watching alcoholic Uncle Frank stab Cousin Lenny with a fork over the last drumstick is a horror film I can do without.