'We’re All Going To The World’s Fair' will be available on Digital Download & a limited edition Blu-ray May 9th, 2022 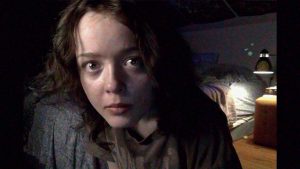 As a person who was born long before the internet, I wonder where the world wide web would have taken me when I was a teenager. I can never really understand that community at my advanced age, but I do know what dysphoria feels like. I was one of the book readers. I devoured every novel I could get my hands on from a very young age and tried to find a semblance of myself in those words. I was also left alone for much of my childhood, by busy working parents. If that same obsession for the written word had been directed into the dangerous dark realm online, who knows what could have happened. I felt very alone and probably would have jumped headfirst into anything I could have found on the internet, just for the excitement and perceived human contact. The closest experience to Casey that I have, is a short jaunt a few years ago into writing my own Creepypasta. 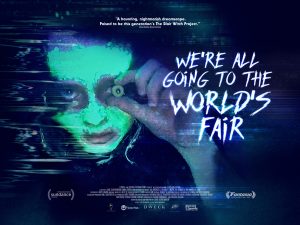 In Jane Schoenbrun’s We’re all going to the World’s Fair we meet Casey, (the amazing newcomer, Anna Cobb) a lonely teenager who is searching her computer for something meaningful. She makes her own little videos and posts but has very few viewers. Her father is just downstairs but it’s obvious he is only someone to be afraid of. We know he comes home from work at times, but Casey isolates herself in her room when he is around. We never actually see him onscreen. She seems to be pretty much on her own. When she decides to try an ominous online game called “The World’s Fair Challenge”, a game where some of the participants have disturbing reactions and changes to their bodies, we know she is in for a scary experience.

Writer/director Jane Schoenbrun, a non-binary and trans filmmaker, brings their own experience to the screen. The film was written years ago during a difficult time in their life. When you don’t feel right in your own body, the internet allows you a place where you can live without giving up your full identity. It’s a place to escape; especially if you have no idea who you really are. It’s a place you can create a new you. It was very brave for Jane to share this intimate part of their life with us.

When Casey pricks her finger, wipes the blood on her computer screen, and says “I want to go to the World’s Fair” three times, I immediately thought of urban legends like Bloody Mary or Candyman. I hoped this film would not use one of those overused tropes. But happily, no monster jumps out to get her, and I settled down to watch a very heartbreaking and cerebral film. The true horror in this film is the loneliness and uncertainty in this young person’s life. 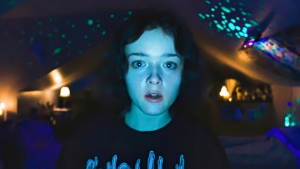 Casey documents her experience and puts it out there for anyone to see. She watches the other players in the game to see what they are going through. Everyone is different, from thinking they are turning into plastic to being sucked straight into their computer’s screen. She waits and continues doing her videos to see when the changes will begin for her. Oddly enough she doesn’t seem worried about the dangerous possibilities of something that claims to be the ‘internet’s scariest horror game’. That is of course if it’s real. She even states in her opening video that “I love horror movies and thought it might be cool to try living in one.” Most of the film is an intimate examination of her waking hours and the time she spends on the computer. We rarely see her in any light other than the one coming from her computer screen.

While she waits, she self-soothes with ASMR- The music and soft whispery video clips and sounds are like a parent singing a lullaby as Casey goes to sleep. I can’t help but wonder where her mother is and why Casey is so alone. 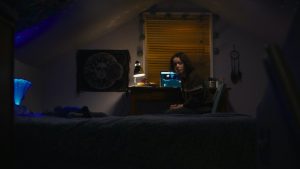 The only person she speaks to in the entire movie is a man who goes by JLB. (Michael J Rogers) He claims to care about her and her safety, which makes Casey and us as the viewers wonder if he is a pedophile. Or is he possibly just a father who lost their child to the very thing that Casey is getting drawn in by? Is he dangerous, or does he really want to help her?

So, what does Casey get after all is said and done? The effects, if any are very ambiguous and there are no true answers. Is she stronger or better for the experience? Is she going through any physical transformations, or is it all in her imagination? What about the others in the same challenge? Is this a dangerous and evil game- or is it simply a bunch of sad lonely teens crying out for help? Could this hive-minded experience cause them to hurt themselves?

Anna Cobb was the center of this film as Casey, and she was truly a wonder. I have high hopes for this talented teen. We spend most of the movie with her, and she was perfect for the role.

This coming-of-age story about a lonely teen trying to figure out how they fit into the world drew me in deeply. Trying to throw yourself out there and find someone who will truly see you is the hardest part of being alive at any age. I learned a lot about the online world’s RPG culture and dangers, in addition to feeling very connected to Casey herself. The isolation, the desire to feel something, the not fitting in; all of this was me. Even the favorite stuffed animal from childhood and the blacklight posters glowing from the ceiling felt like someone peeked into my teenage bedroom window. I could have been Casey if born a few decades later. I wanted her to be safe, to find what she needed, without losing herself completely. What more can I truly ask from a film, but to have it leave me emotionally invested in the people on the screen.

We’re All Going To The World’s Fair is hauntingly beautiful, and I can picture it becoming a cult classic.

We’re All Going To The World’s Fair was released in cinemas nationwide on April 29th, 2022, and will be available on Digital Download and a limited edition Blu-ray on May 9th, 2022