Haunting and Relevant: The Invisible Man 2020

"He’s sitting in that chair." 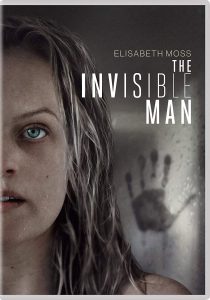 Incredibly tense, traumatic, and heartbreaking, The Invisible Man is a powerhouse film, with an important story to tell. Writer/Director Leigh Whannell (Saw, Insidious) knocks it out of the park and made this the one the best takes on the classic story yet!

The original novel The Invisible Man from H.G. Wells was written back in 1897. Since then the book has been adapted to film more times then I can count. While some were similar versions of the novel, there were others that were total messes of bad comedy or just plain terrible films.

I adored the 1933 Universal offering when I was a kid, not because it was scary, but because I loved the early special effects. Up until this year, my other fav was Hollow Man in 2000. With special effects that still hold up today and Kevin Bacon as a literally killer bad guy, it was the only version I had liked since the original. (It probably didn’t hurt that I got to go backstage and meet him while he was in his burn makeup! Yup I am one degree from Kevin Bacon, but that is a whole other story.) 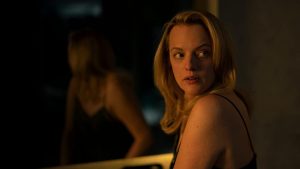 2020 brings us the latest The Invisible Man and OMG my mind was blown. Not only is it a well-done film on a low budget, but the script from Leigh Whannell also brings to light an often-underplayed problem – Domestic Abuse. Told from the victim’s point of view, it was impossible not to feel the terror she experienced all the way through. It was such an awful feeling when you saw the pity in people’s eyes when they thought she was crazy, I wanted them so badly to believe her the way I did.

Synopsis: When Cecilia’s abusive ex takes his own life and leaves her his fortune, she suspects his death was a hoax. As a series of coincidences turn lethal, Cecilia works to prove that she is being hunted by someone that nobody can see. 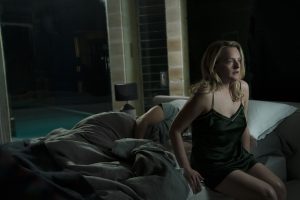 Because of us being in the #MeToo era, abusers who were once protected and got away with horrible shit, are being called out. But some, like our antagonists here, are still getting away with it. The film starts strong – Cecilia (Elisabeth Moss) is sleeping next to a monster and has finally gotten ready to flee. With fear and purpose, she gathers her things, puts on her sneakers, and heads for freedom. Accidentally bumping a car in the garage and setting off the alarm, she barely makes it over the fence and into her sisters’ car before her boyfriend Adrian (Oliver Jackson-Cohen) breaks the car window just as they drive away. It was obvious even at this early in the film, that if she were able to leave out the front door, she would have. Despite looking like a regular guy, Adrian is a horrible evil controlling predator. I pretty much held my breath during the entire escape scene – it was that amazing! I loved Cecilia immediately for her strength and bravery. 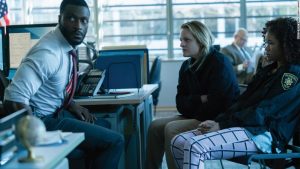 Soon after Cecilia is free and hiding out at her friend James’ (Aldis Hodge) house, they get word that Adrian has committed suicide and left Cecilia everything he had. A wealthy, successful optics engineer, Adrian was a narcissist and she does not believe for a minute he would kill himself. His brother Tom (played by a super creepy Michael Dorman) tries to convince them it’s true and that Cecilia is now a rich woman.

Cecilia should be happy and able to go on with her life – But right from the start weird things start happening and it’s clear that Adrian has figured out a way to be invisible and is gaslighting her to make her look insane.

Seeing Cecilia’s life being systematically torn apart by an unknown stalker, I got so mad at the people in her life who patted her on the head and told her it was just her PTSD. In a scene that again made my skin crawl, it is obvious there is someone sitting across from Cecilia in a chair, you can even see the impression of a body, but no one visible is there. Trust me – you will constantly be scanning the walls and in every corner for something to move. This is a film that keeps your attention every minute!

SFX in a film with an invisible entity can look so fake if not done right. I’m am happy to report they were handled in a way that was believable and dealt with enough technology to keep a younger audience interested. In an interview with Moss, it was interesting to hear how silly it felt to act alone; green screen scenes are very often difficult for the actors to do their best work, but there was no doubt of the terror she was feeling in every scene. She is an incredible actress! 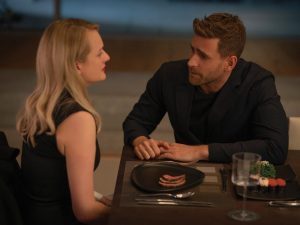 This brings me to a mini-rant. I was reading an article on MorbidlyBeautiful.com (you can read it here) about how there were misogynistic and rude comments out there about how homely Moss was compared to her co-star and how she looked all grubby and should brush her hair. What? This is an abused woman, stalked by an insane man bent on revenge, and she is supposed to be all pressed and pretty? Shut up, folks. Moss was perfect for this role and her performance proves it.

The finale could be thought of as predictable, but I disagree. There are several fantastic twists and turns, horrible heartbreaks for Cecilia, and just when you think you have it figured out, the story takes yet another turn. It was everything to me that Cecilia somehow, someway, would be able to take back her life and get revenge on the man that tried to destroy her!

There is so much to this film, and if you haven’t yet- you need to watch it now. Socially conscious doesn’t even start to describe this terrifying horror thriller!

The Invisible Man was released on 4K UHD, Blu-ray, and DVD on May 26th, 202 from Universal Pictures Home Entertainment.