"There is going to be “Hell” to pay, so try not to die laughing." 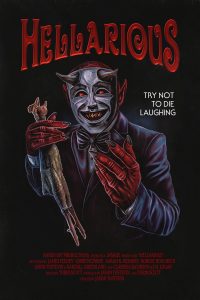 Writer/director/filmmaker Jason Tostevin has put together a devilishly funny collection of horror shorts that will be out just in time for Halloween. The concept of Hellarious, to take seven horror shorts that literally killed at film festivals and put them together into a horror anthology is genius. I have screened a few of these previously but seeing them as a feature film was perfect for this horror lover! All are different, yet when shown together they blended perfectly into a special treat for horror fans everywhere. Get ready to squirm, scream and even say awwww, when you bring Hellarious into your home.

I found out about Hellarious, because one of my all-time favorite horror shorts, Lunch Ladies, is in this film. I watched the anthology for the joy of seeing Lunch Ladies again, but I was so thrilled afterward because I really enjoyed every single one of these films! 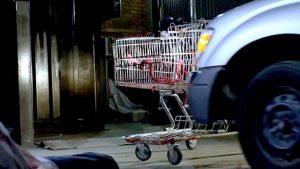 Hellarious Chapter One starts out with a crazy story called Killer Kart by James Feeney. Oddly enough, my very first job ever was working at a grocery store and in truth people did not treat shopping carts well. The premise is – What happens when the shopping carts get tired of all the abuse? The answer is not good for the employees at the store, or for that matter the world! Killer Kart was a gory, funny and insane start for the film! 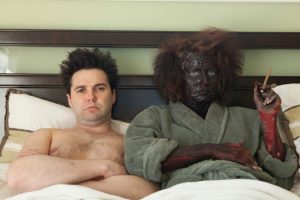 Chapter Two is entitled Horrific by Robert Boocheck. Inside a backwoods country trailer, we meet a pretty crude guy, enjoying some pornographic me time with himself, when he hears a noise… there is some sort of creature in his humble abode. Much destruction follows as our gross dude fights the mysterious and deadly creature. After the air clears and said dude goes for a beer, he hears another sound… well, I’ll let you discover what urban legend Horrific was based on.

Chapter Three brings us ‘Til Death by Jason Tostevin and Randall Greenland. I loved this story about a bunch of loser guys and their desire to kill their controlling wives. The irony of what they did will not be lost on the audience; this is a very entertaining and clever film!  Karma is a bitch, literally, in this twisted and hysterical zombie tale. 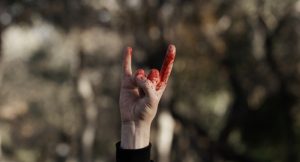 Death Metal by Chris McInroy, is in the dead (pun intended) center and is the bloodiest story in the film. What happens when a not-too-bright rocker is given possession of a guitar with powers from hell?  Bad things ensue when our hapless guitar player fails to follow the dark lord’s rules. I laughed out loud at the scenes that took me back to the days of Monty Python and the Holy Grail and even Kill Bill. Rock on! 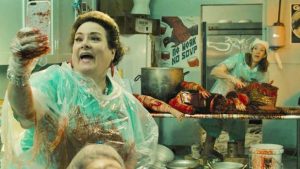 Lunch Ladies is the Fifth Chapter and fit in perfectly. An entertaining story about two downtrodden women who win a contest, accidentally do something very bad and then rise like phoenixes to become what they were meant to be. This is not a film for the faint of heart; it had blood and gore galore. But the central story is so whimsical and the actresses so truly talented, that you fall in love with them both and want them to succeed. Clarissa Jacobson and JM Logan created an amazing and playful romp in the lunchroom. 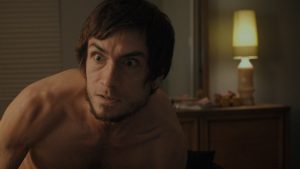 Counting down to the end; Chapter Six was Bitten by Sarah K. Reimers. I really enjoyed this playful tale about the love of a dog and its master. This was probably the most mellow of the chapters, but that’s not a slight. The terrific acting by both humans and canines made this a memorable and fantastic film. Is it a werewolf story or simply a love story? Or is it both? Whatever it is, I loved it! 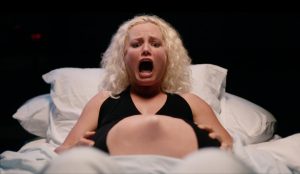 Last but not least is Chapter Seven- Born Again, the second story in the film by Hellarious creator Jason Tostevin and Randall Greenland. Bumbling Satan worshipers screw up a ceremony to bring a new dark lord into the world and they are just as surprised as anyone when they see who ends up being born.

Every film in Hellarious boasted terrific SFX, almost all totally done with practical effects. The writing and cinematography for each one was top-notch and funny as hell! (Yes, I’m being punny again) I know I’m going to want to own this soon-to-be-classic horror anthology.

Hellarious is available to pre-order from HorrorPack for a limited time, on Blu-ray and VOD beginning September 4th, 2019.

Bonus: Also included on the limited-edition Blu-ray, is the world premiere of Clarissa Jacobson’s A Very Important Film, a parody send-up of self-important festival films, created as a promotional short for her film Lunch Ladies.

Special Note: For those of you that like going to horror film fests, Jason Tostevin also programs the Nightmares Film Festival in Columbus Ohio which this year will be on Oct 24-27, 2019