From A House On Willow Street – REVIEW – EVIL INDEED HAS AN ADDRESS!

In this gritty and nervous thriller a group of thieves hatch a quite elaborate plot to abduct the daughter of a millionaire in a house on Willow Street.

FROM A HOUSE ON WILLOW STREET

Where to start with this little flick out of nowhere by the folks at IFC Midnight? Well, ‘FROM A HOUSE ON WILLOW STREET’ certainly had the essence of an old school 70’s Grindhouse crime caper in feel and flow but with a more modern day setting.  Director Alastair Orr, who also helmed a favorite of mine ‘INDIGENOUS’ in 2014, did a wonderful job of blending genres here which is a trait I enjoy in people. While watching this I couldn’t help but feel I was watching an evil hybrid of ‘DON’T BREATHE’ and ‘EVIL DEAD’. While that might be a turnoff perhaps to some it was not with me. 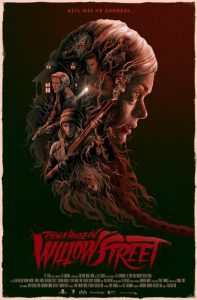 SPOILERS AHEAD! In this gritty and nervous thriller a group of thieves hatch a quite elaborate plot to abduct the daughter of a millionaire in a house on Willow Street. A VERY elaborate plan. Too elaborate. Now, let’s be honest here because it wouldn’t be a movie, much less a horror movie, if something didn’t go fantastically wrong. And it does. Oh, it does. This ragtag group that can’t stop arguing with one another don’t get things right the first time so what do they do? They…go back to the scene of the crime. That’s right, they go back. Seems like a bad idea. Well, it is. However, this is where things take on to the next level of horror during their actual findings upon their return. Dead bodies and videotapes are never a good combination. Now, the beginning of this flick was a little slow going for me at first. After going through the whole ‘getting to know you phase’ with all the characters, each of whom I couldn’t care a less about, I was ready for some action. 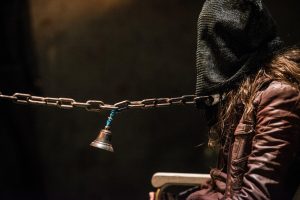 And this is where Willow Street started to really deliver! It delivered on tension, it delivered on fear, it delivered on darkness and delivered on the bloody grue! Once it hits stride it delivers some truly awesome and gruesome special effects, with an effective and chilling way of getting under the skin by attempting to force the audience to face their quite personal fears and/or demons along with the cast.

The sole real standout in an otherwise sort of bland cast of characters that you can’t wait to see die one right after the other is actress Carlyn Burchell as the captive Katherine. This lady has set of haunting eyes that remind me of Lugosi in a way of emoting true evil. She is one to watch and I for one can’t wait to see what she does next. 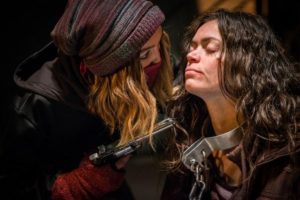 Other than some wooden acting this movie gets most of the steps right. A little hokey looking cgi here and there which I felt was quite unneeded. And it is just a little and forgivable, which they more than make up for things with a healthy dose of red stuff and practical effects work.

To sum things up I would consider FROM A HOUSE ON WILLOW STREET a ‘good’ movie but just falls short of being a ‘great’ movie. It’s worth viewing with a huge old bucket of that buttery popped popcorn! And remember, as the tagline of the film says…EVIL HAS AN ADDRESS!