I Am Not A Serial Killer’ Gets This Month Release Date! 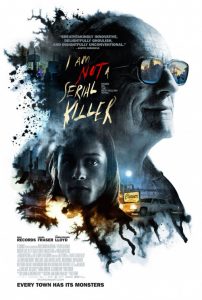 “Sixteen-year old John Cleaver (Records) is dangerous and he knows it. He’s obssessed with serial killers, but really doesn’t want to become one. Terrible impulses constantly tempt him, so for his own sake, and the safety of those around him, he lives by rigid rules to keep himself “good” and “normal”. However, when a real monster shows up in his town he has to let his dark side out in order to stop it – but without his rules to keep him in check, he might be more dangerous than the monster he’s trying to kill.”

The thriller recently premiered at SXSW and was then picked up my IFC Midnight. The below trailer frankly speaks for itself.