How Does an evil genius go about destroying Christmas? In “Infinite Santa 8000”, a futuristic animated action thriller set in the year of 8000, where  Dr. Shackleton (Tara Henry)...

How Does an evil genius go about destroying Christmas? In “Infinite Santa 8000”, a futuristic animated action thriller set in the year of 8000, where  Dr. Shackleton (Tara Henry) is hell bent on ending Christmas forever. Watch as Dr. Shackleton formulates atrocious schemes and commits unthinkable acts to end the life of our beloved Kris Kringle  (Duane Bruce). 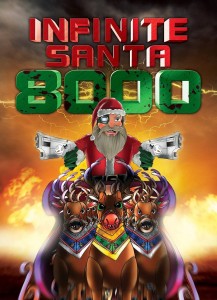 Our heavy set, Jolly old elf goes to all out battle, along side his loyal robot-girl sidekick, Martha (also Tara Henry). Don’t be fooled by the childish format and adolescent list of characters, This movie promises to deliver suspense , action, and the blood and guts of even the best of the live action horror flicks. What will Dr. Shackleton do to end Christmas? Watch and see how far Martha will go to protect Infinite Santa 8000.

I did not know this started as a series of the same name back in 2010.  Creators Michael Neel and Greg Ansin decided since the series was successful, they would try their hands at making a full movie. I think it succeeds. Infinite Santa 8000 feels a lot like a comic book that has came alive on screen, along with a excellent heavy metal soundtrack. Sometimes a little repetitive with the dialog but overall it is highly entertaining and fun to watch.