Interview at The Saturn Awards with Bruce Campbell from ‘Ash vs. Evil Dead’

Deadites and Carnage and Mayhem, Oh My!

The 43rd Annual Saturn Awards, presented each year by the Academy of Science Fiction, Fantasy and Horror, was as much fun and star-studded, this year as always. Your LA Zombie Girl teamed up with Hollywood News Source and had a great night meeting and interviewing some amazing people. For my first interview, I was super excited to meet and get a chance to chat with the crazy character who plays Ashley J. Williams in Ash vs. Evil Dead– The one and only Bruce Campbell. 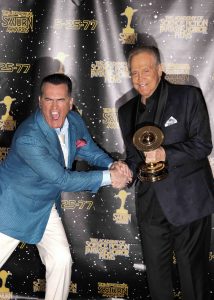 Los Angeles Zombie Girl: Hi Bruce- it is so fantastic to meet you! The Evil Dead and especially your character, Ash Williams, has brought a lot of joy to this zombie girl! Your show takes campy to a whole new level! I just heard you say you celebrate carnage and mayhem- I love that statement!

Bruce Campbell: “Why hide from it? It’s all fake anyway, all of it. When people hit me with reality questions like, where does the music come from, I say, ‘I don’t know- where does, the music come from?’ Our show is just a different form of entertainment- we call it Splatstick.”

LAZG: Why do you think The Evil Dead is so popular?

BC: “Ash is a regular guy, he’s from the equivalent of butt-crack Michigan, he doesn’t know anything, he has no skills, he’s not a soldier, he’s not trained in anything. We got a note from Starz one time ‘cause Ash was waving his shotgun around and they said: “That was improper gun handling!” And we’re like, Ash never got trained, he wouldn’t know! So that was just a silly note. My job is, that if things get too grim, let’s infuse some comedy. There are other horror shows out there, but they are a bit grim, that’s why we celebrate the carnage and mayhem and have fun.”

LAZG: Do you have a favorite scene from Ash vs. Evil Dead, that you’d like to share?

BC: “I always go for the comedy. Last season, I got pulled up head first through a cadaver’s butt, and then had to run around a lavatory with his butt on my face.” 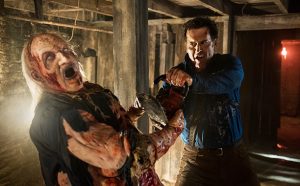 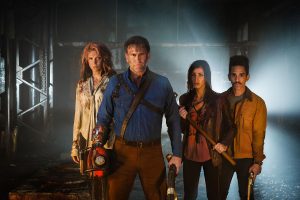 LAZG: Can you tell me about your Haunted House show, that was in the works?

BC: “I can tell you that it’s no more! They line things up, develop projects, then they have to go, are we doing these? Some they’ll do and some they don’t. Ya gotta throw stuff up against the wall, and see what sticks. I guess it didn’t stick.”

LAZG: Do you have any other projects coming up?

BC: “I’m going on a tour, for my next book. It’s called ‘Hail to the Chin: Further Confessions of a B-Movie Actor’. It’s about the last 15 years of my life. My first book ‘If Chins Could Kill’ was about the first 15 years. The new one has much more ridiculous stories.”

Bruce teased to EW a while back that there is much more to Ash’s story. “I can’t say much because we’re going to try and do some crazy shit,” Campbell said. “But we’re probably going to crack more into Ash’s big picture story. He is foretold in an ancient book. He’s not just some guy in a crappy trailer home. There is a myth to Ash, there is a story, and so we want to explore a little more of that Joseph Campbell, big picture story. Why him? Why that guy? Why is he chosen to save the world?”

Thanks Bruce! Looking forward to more carnage and mayhem. Season 3 of Ash vs. Evil Dead is coming soon, and will continue to bring us the deadites, demons, blood, guts and the best of comedy one-liners this fall exclusively on Starz. Enjoy this video. I think it gives some fun insight into the making of the show!

To keep up with all the Bruce Campbell fun go to his: Website, Facebook or Twitter. To check out his books go to his Bruce Campbell Writer Boy page. For everything on Ash vs. Evil Dead check out The official STARZ page.