Jordan Peele’s ‘US’ is an Incredibly Dark, Sinister and Amazing Film

"Maybe the monster we really need to look at has our face. Maybe the evil is us."

Sometimes all of us have moments that feel like we don’t fit in. Like this isn’t our real life, just a place we are visiting. I spent most of my life growing up in a world that I didn’t feel like I belonged in. I was the weirdo, standing on the sidelines, looking in at all the “normal” people, whatever that is. After watching US, I don’t feel necessarily fixed, but I am now strangely at peace with my differences. 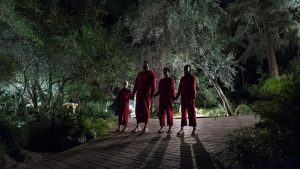 You probably will say you already know this- but for those with their head under a rock, US is the second horror thriller from comedian turned filmmaker Jordan Peele, who received an Oscar for his first film Get Out. Peele has already found a signature “niche” for his films. Both have a retro feel and enough tension to make an audience almost stop breathing from holding their breath. Get Out and US share more than a dash of humor, deep allegories and are certifiably creepy. US is a movie that needs multiple viewings, which is why it has taken me this long to write about it. I wanted to watch it again and when Universal sent me the Blu-Ray, well I had to watch the special features to see what I got right and what I was totally and completely wrong about, when trying to understand the writer/director’s vision. 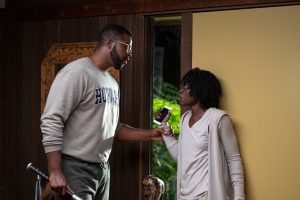 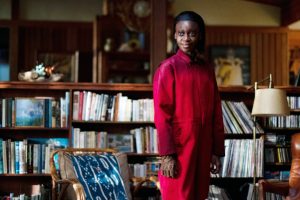 Synopsis: Adelaide Wilson is a haunted woman. She is haunted by unexplainable and unresolved trauma from her past. When she and her family go to their summer vacation home in Santa Cruz and to the beach where she got lost as a child, her fear turns into paranoia. After a very strange day at the beach with friends, where her son gets lost just like she did, the family arrives home to find another family standing in their driveway, a family that eerily looks just like them.

Us is a deep movie, one that you must pay attention to. It asks a lot of big questions about our existence and explores many themes including doppelgangers, rabbits, emancipation, class entitlement, duality, Hands Across America and even government mind control. Who are we really? What is a family? Why do we exist? The “What ifs” were endless. When I took philosophy in college, I wish this movie had been out. There could be a whole class written about it. (Actually, there probably already is. LOL) US starts out feeling like a simple home-invasion flick, but quickly turns into a blood-soaked nightmare of social collapse that the characters can never wake up from. 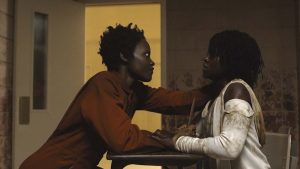 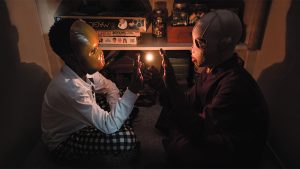 The Wilson’s look like a pretty normal family. Mom Adelaide (Lupita Nyong’o) is the leader, Dad Gabe (Winston Duke) strong but a little goofy, sister Zora (Shahadi Wright Joseph) and brother Jason (Evan Alex) smart, sassy, but good kids. To look at them you see a typical middle-class family doing well, unless you compare them with their friends The Tylers, (Elisabeth Moss, Tim Heidecker, Cali Sheldon, Noelle Sheldon) who drive a more luxurious car and have a significantly bigger and fancier house. 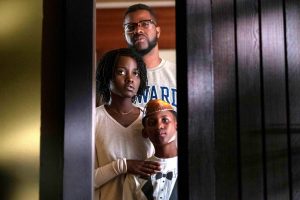 Adelaide is not as “normal” as she looks. She has suffered for years from severe PTSD from an incident at the beach in Santa Cruz as a child. After wandering off from her father, young Adelaide (Madison Curry) goes into a hall of mirrors and runs into a duplicate version of herself. The experience was so traumatic that she was never the same, losing the ability to speak. Growing up she learns to dance and becomes able to express herself but is never quite the same. She has always been haunted by her other “self”, feeling like she was always right behind her. 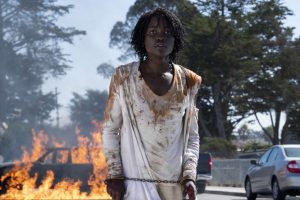 After an uncomfortable day at the beach, where Jason wanders off and sees a bloody man on the beach, Adelaide asks Gabe to take them home. Before they can settle down to sleep, they see a family standing in the driveway. A family that looks just like them, wearing red jumpsuits, a single driving glove, carrying scissors and sporting angry staring faces. Each of the red suited doppelgangers seems to be a parody of the Wilsons. Zora’s, with a creepy smirk and deep dark eyes, Gabe’s is an unkempt grunting animal, brother Jason’s double is a scarred and feral boy with a mask and Adelaide’s double, Red, is the wide-eyed matriarch of the bizarre group. Croaking out “We’re Americans” to answer Gabe’s question of who they are, she is the only one with the ability to speak and tells them the story of a little lost girl, mind control and people that are like puppets. The creepiest part is the slow ugly smiles, the jerky movements and terrible sounds coming from all the evil doubles, as they try to copy the movements of their other selves. They are having fun stalking and terrorizing them and it’s not hard for the family to figure out they are the enemy, and they want nothing but to kill and replace them. 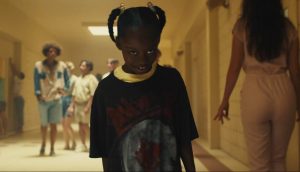 US is a weird, smart, funny and gory film, yet a serious story too. It is a unique tale full of mythology, that also examines the ramifications of privilege. To quote Jordan Peele- “Those who prosper and those who suffer are two sides to the same coin. The two are tethered. That is the central theme of the film.”

This film may not be for the faint of heart. It is a violent tale, full of blood, gore and for serious horror fans, some very satisfying deaths. But they happen for a reason, good or bad, and that makes them work and not seem gratuitous. Also as explained by Peele, “There is a grey area where religion, magic and the unexplainable meet science. Between the two you have an abomination, that is a metaphor for humanity.” That is not the only metaphor, trust me. Deliberately so, Peele has put in so many symbols, horror easter eggs, and crazy imagery, that it could take many viewings to find them all.

I caught myself cheering at certain moments, and then becoming very upset in the next scene. US is a film that brings out a myriad of emotions throughout.

All the actors involved were incredible. Without such an amazing cast, this film could not have worked. Acting-wise the bar was set impossibly high by Nyong’o as Adelaide and her doppelganger Red, with a performance that was beyond anything I have seen in a long time. There is a part of the special features that shows her in between takes, staying in character and it was amazing how she was so believably creepy. 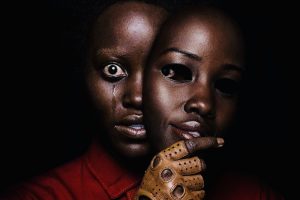 Luckily for the audience, the whole cast was up to the challenge and every person gave an Oscar-winning performance. Think about it- every actor had to play their part twice, but absolutely differently! What a nightmare of logistics to pull off- but pull it off they did. What an amazing team of people at every point in this film it took to do this, and I am so glad they managed such a feat! Peele pointed at the fence and really got a home run with this one!

Having seen it a couple of times now, I know I will be back to revisit it many times in the future. I can only say that about a handful of films ever. There is so much at stake in this film, and so much to tell, but I can’t without revealing too much. The best part about this movie is that aha moment, that slow dawning second when your brain kicks in and you get what is going on. It is an incredibly knife-edged and powerful moment. This film will make you laugh, sometimes from humor and sometimes because the look on a character’s face brings chills that run up your spine. US is also capable of making you cry when you realize that for everything good in the world there must a balance of something bad. It hits all our primal fears and will bring on a lot of conversations afterward.

Despite multiple viewings leaving me with more questions than answers, US has become one of my favorite films of all time!

Untether the truth! US is available on 4K Ultra HD, Blu-Ray, DVD and On Demand from Universal Pictures Home Entertainment.

All photos courtesy of Universal Pictures