Jump in the Car and Take a Ride with ‘DriverX’

"When everything is said and done, all you have is Happy Foot, and Happy Foot is ok"

First off, I primarily write about horror. DriverX is not a horror film. It is however terrifying. What it deals with is the deepest darkest fear we all have – failure. It illustrates the struggles of the mid-50’s aged middle class and how hard it is to survive in these ridiculously expensive times.

Synopsis: Middle-age, stay-at-home dad Leonard (Patrick Fabian) who used to own one of the most popular record stores in LA, must drive for an Uber-like rideshare company (DriverX) to help support his working wife and two young daughters. But low pay, feelings of failure and wild LA nights put an even greater strain on his marriage.

Henry Barrial, the writer and director of this film is an indie filmmaker. He himself had an upward wave of success after his film Some Body played at Sundance in 2001. But as all indie filmmakers can attest to, it is a cruel and bumpy ride upwards and many never make it to the top.

Despite the struggle, Barrial managed to get a few more features made and then financing for another film fell through over and over. With a wife and family at home, Barrial took the job that we see many people doing right now- driving for Uber. DriverX explores the awkwardness and the learning curve of being middle-aged in a young person’s world and Barrial turned his Uber experience into a fantastic micro-budget film. I hope this movie is the one that takes him upward again. I really loved it.

Most people have hardships. Life has its ups and downs. I enjoyed seeing the learning curve our protagonist Leonard has in dealing with this new world and the often-seedy, yet exciting side of Los Angeles at night.

The film is filled with genuine characters and wonderful acting; a superb ensemble of talent, especially from Patrick Fabian and Tanya Clarke, I got caught up in the story and felt for them all. The music score was perfect and took each vignette flawlessly into the next. 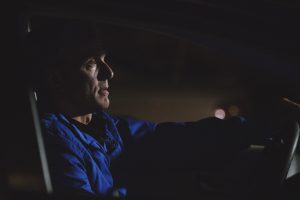 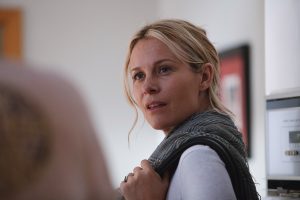 What is the meaning of life these days? How does someone in their 50’s continue to survive in a technology fill world that we can’t keep up with? Many of the other journalists I work with are half my age- so I understand the struggle.

DriverX is moody and cynical and timely. I love the cinematography that was probably due to low-budget, but the architecture and all the beautiful colors from the lights of the city, tell an incredible story of their own. I got to see some of my favorite spots in LA and it was wonderful.

I have considered driving for a rideshare company myself- but I never will. The idea of the brief encounters with strangers is captivating as an idea, but the reality is too dark and strange, who could end up in your car, friend or foe?

I have learned a lesson from Leonard though, to never give up, no matter how tired I am of the things around me, I always need to try harder. The film connected with festival audiences and it connected with me. DriverX elaborates on the idea that if you want something bad enough you must keep reaching for the elusive ring. But be ready to find out it may simply be home.

And Leonard- I miss record stores too!

You should see DriverX. The film is in theaters and VOD today November 30th