Despite their best efforts, Sonny and Noah aren't going to close this sale 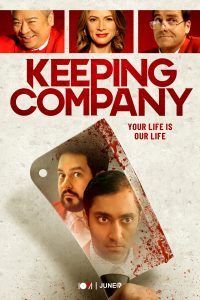 In horror-comedy Keeping Company, writer and director Josh Wallace looks at the cut-throat business of selling insurance, and the evil of capitalism itself. For the most part, salesmen are not beloved; especially high-pressure insurance salesmen. These sharks, looking for the chum in the water of life are only out for themselves. They go door-to-door, circle around the naïve victim, and use any method they can to close a deal, without feeling bad about being neither honest nor fair. Insurance salesmen, Sonny (Devin Das) and Noah (Ahmed Bharoocha) are not necessarily people an audience would care about losing to other killers in the same pool.

Except they kinda grow on you.

We learn they have both had a rough time in life, have no self-esteem, and just want to make their families proud. Of the two men, Sonny is the true predator and is being groomed for a promotion by the top shark in the office, the evil company owner Paula. (Gillian Vigman) Noah is the nice guy just trying to get by with a baby on the way. Noah considers Sonny his best buddy, to the dismay of Sonny, who constantly reminds him they are just co-workers. Together they are a good sales team, but the animosity is there.

Synopsis: A fateful chain of events begins to unravel after two brash insurance salesmen go knocking on the wrong door and find themselves trapped inside a serial killer’s basement, putting their lives and their jobs on the line.

The film starts with a silly TV commercial for a local political campaign. Glen Garry is running for office, and he wants to clean up the druggies in the streets of his town. We don’t know why that’s important to him until later, but it lets us know where the hunting ground for bad people is.

Sonny and Noah are sent out to double their sales and are turned down all day. When a fender bender puts them face to face with a twitchy guy named Lucas, (Jacob Grodnik) they think they have their big sale and chase him down when he drives away. All they have to do is sell him a big policy and they will be set. Lucas lets them in the house and as soon as they get to the basement, they realize they have made a mistake; they are trapped. Being knocked out and chained in a basement is a pretty good sign that this was not the right guy to hard sell. 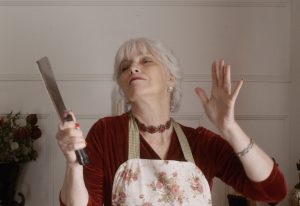 Even though Lucas has locked them up, it is clear that he is a victim of his extremely wicked grandmother. (Suzanne Savoy) He is just as trapped as his two new victims are. Can you say Stockholm Syndrome? Lucas even starts to open up to the friendly Noah and almost helps them escape, but Sonny screws that up. Lucas is such a damaged soul, and I found myself wanting him to escape with Sonny and Noah. But unfortunately, as in the classic Psycho, Lucas does what his grandmother tells him to do.

I am leaving out the third act because you need to see it for yourself. The ending wasn’t perfect, but it was satisfying. I enjoyed the black humor and the characters all had good chemistry. Partner that with some great practical effects and you have an entertaining horror-comedy.

The timing throughout might not be perfect, but all the comedy, satire, and horror boxes get checked. This is a dark and gory tale, but somehow there is still a comedic lightness that keeps it going. If you are not sure about this one, think Sweeney Todd meets Psycho. If those are favorites of yours, then you will love Keeping Company.

The comedy-thriller, Keeping Company was available June 7th, 2022 on VOD

To get a copy go to Order Link: https://geni.us/WatchKeepingCompany