What do they want to do with the baby? 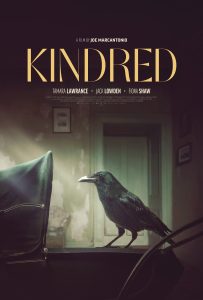 Despite comparisons to Rosemary’s Baby, director Joe Marcantonio’s debut film Kindred, stands on its own. This suspenseful psychological thriller offers up a familiar story with a modern twist.

Kindred introduces us to the adorable couple, Charlotte (Tamara Lawrance) and Ben (Edward Holcroft) who have decided to leave their home in the UK and move to Australia. The problem is Ben’s overbearing mother Margaret, (Fiona Shaw) who lives in a crumbling mansion in the country, does not accept this decision. For her, it’s all about tradition, and since the estate has been in the family for generations, as far as she is concerned, Ben cannot leave and shirk his responsibilities.

Right from the beginning, we know things aren’t going to bode well.

Crows seem to be following Charlotte everywhere, and these dark omens always show up just before things fall apart. And fall apart they do. Charlotte isn’t feeling good and as is usual when a woman starts throwing up – she finds out she is pregnant. Ben is thrilled, Charlotte, not so much. Her mother suffered from delusions and mental illness at her age due to pregnancy, leaving Charlotte unsure if having a baby is something she ever wants. Unfortunately, before she even gets to think it out, Ben, a veterinarian, is kicked in the head by a horse while on the job and dies from the injuries. 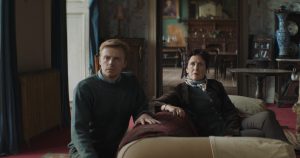 Charlotte is now alone. Greif-stricken, in shock, and back at the estate with Margaret and Ben’s oddball stepbrother Thomas. (Jack Lowden) Margaret insists she stay for the sake of the baby, the creepy twosome promising to take good care of her. Charlotte admits she doesn’t feel well and passes out quite often with horrible dreams filled with blackbirds and horses. The tension between the three of them is thick, and if Charlotte had been able to think straight, she would have run as far away from the damp old house as fast as she could. What was in all that tea they make her drink?

Kindred is a study of manipulation, and a beautiful bird kept in a gilded cage. In that way, it is somewhat like Rosemary’s Baby. Charlotte isn’t able to know who to trust, and for most of the film, it isn’t really clear if she is being gaslighted, drugged, or whether she truly has perinatal psychosis, like her mother. In any case, she is trapped in the big strange house, and no amount of escape plans are ever successful. 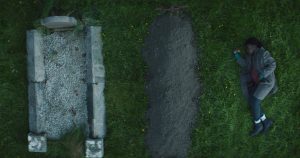 What makes this movie especially compelling is the performances of the three central characters.

Charlotte is wound up like a top and Tamara Lawrance is superb and unafraid while showing a myriad of emotions. I love it when a performance is so raw and genuine. I also enjoyed her clever, if unsuccessful, attempts at trying to manipulate her captors back. It was heartbreaking to see people she should be able to trust betray her and witness a strong woman doubt her own sanity.

Her attempts to escape seemed to almost work with Thomas. But it was hard to see past his creepy attempts to replace Ben with himself, to know his true feelings. Jack Lowden’s performance had to be very subtle, and he nailed it. It was difficult to ascertain what was really going on in his head unless you looked closely.

Fiona Shaw as Margaret was phenomenal.

From playing the lady of the manor to screaming at Charlotte, pulling faces of pain caused by injuries inflicted by an abusive husband, to the telling of her dark story about her unhappy parental experience, I loved the Killing Eve star so much. She is a force of nature. Her disturbing and layered performance is proof. Margaret is the perfect example of a mother-in-law from hell.

I have seen Kindred also compared to Get Out- but I really didn’t see the similarity. 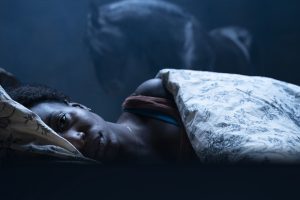 This film seemed more about class rather than race. Yes, Charlotte and Ben were an interracial couple, but the difference in where they all came from seems the more important issue. It wasn’t Charlotte’s race that was a problem, if anything it was her working-class status compared to a very rich old, privileged family. Margaret wanted an heir to the family estate, and Charlotte could provide that. Although seeing a wealthy white woman strip all control away from a black woman, was truly terrifying.

Kindred is a raw, tension-filled thriller that explores mental illness and the very real issue of gaslighting. Compelling and unique, this is a thriller that audiences will love!

Kindred is available in select theaters, digital and VOD on November 6th, 2020 from IFC Midnight.