My interview with Casey Crow

Casey Crow is the writer/director of the multiple award winning, short film Klagger, which has screened in over a dozen film festivals across the United States and Europe. I really enjoyed this film and appreciated the clever use of sound, atmosphere and pacing that Casey employs to keep the viewer invested and on edge. The films villain, Klagger is truly an iconic and unique character reminiscent of Freddy Krueger, Michael Myers and Jason Voorhees.  Now fans of the short film can contribute to the making of a full length feature version of the Klagger story by contributing to the Klagger Kickstarter campaign!

Below is my interview with Casey Crow: 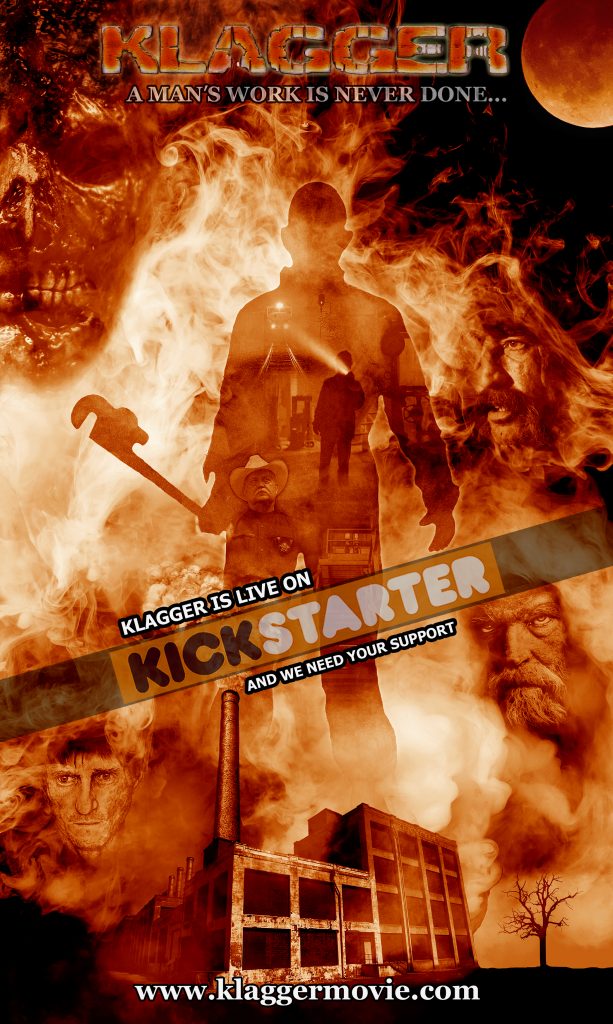 EW: What got you started in filmmaking?

CC: When I was 9 years old, my friends and I would put on little plays for
family and friends and my little sister would ruin the magic by pulling
back the curtain to reveal our stage tricks. So, a buddy of mine, Jeremy
Collier said, “Let’s put the play on film where nobody can see the
effects.” Best idea I’d ever heard! The next day we were recording our
amateur dramatics with Dad’s Super-8 camera. My love of filmmaking was born that day!

EW:  What specifically drew you to making this particular short film?

CC: I have been making short-subject films with a group of friends as part of a
collective where we’d each take turns being the writer/director with
varying degrees of success. After my second effort (Tojenkawa) about a
Native American Myth, I thought an out-and-out horror film might be fun
and would coincide with the ever growing Horror Film Festivals and
Conventions. As it turns out, Klagger has been the most successful short
film I’ve ever been involved with! The Horror Community is die-hard, man!
We’ve met some great people who’ve become long-time friends throughout
this process.

EW: Why, after all these years, have you decided to finally make “Klagger” into a feature film?

CC: Well, the 12 minute version of Klagger has been screening since 2010 at film festivals across the USA and Europe. We have met festival attendees who expressed their desire to see more about Klagger, largely, I think because of the scene in the dilapidated office where you see some elements of Klagger’s past that never are fully explained. Also, people just love Klagger’s look! So, it was basically festival attendees enthusiasm and encouragement that motivated us toward feature-length territory.

EW: Tell me a little bit about Klagger’s journey from script to screen.

CC: Due to the low-budget nature of making your own movies, I usually start
out with a question like “What resources are available to me?” and build
on that. In the case of Klagger, I found and gained access to an old feed
mill which had numerous visual possibilities to exploit for a horror movie.
After that, it was merely a question of asking, “What happened here that
lends itself to a horror scenario?” The equipment inspector and Klagger’s
back-story emerged from these elements essentially.

EW: What can fans of the short film expect from the feature film?

CC: In order to flesh-out a 90 minute version of Klagger, me and my brother (who is co-producing the film) started by asking ourselves “Who is
Klagger?” “What were the circumstances surrounding his death and how does that impact the present?” The answers took us on a journey that involves
real-life horrors such as poverty, alcoholism and domestic abuse. Many new
characters came into being from those discussions which we hope will make
Klagger a solid drama as well as an action packed horror film like Near
Dark or No Country For Old Men.
EW:  Now that your Kickstarter campaign for Klagger is live what are some unique perks from your campaign?

CC: We have some really  cool rewards for people who want to support Klagger through our Kickstarter campaign. My brother and producing partner has designed a bad-ass, lithograph-style design for the new Klagger T-Shirt as well as the official poster available in 18×24 size. We are also rewarding our supporters with DVD’s of the short film in a Special Edition format and a Bluray of the feature when complete. You can even get your own “24″ chrome wrench made from Klagger’s original implement of death and destruction! 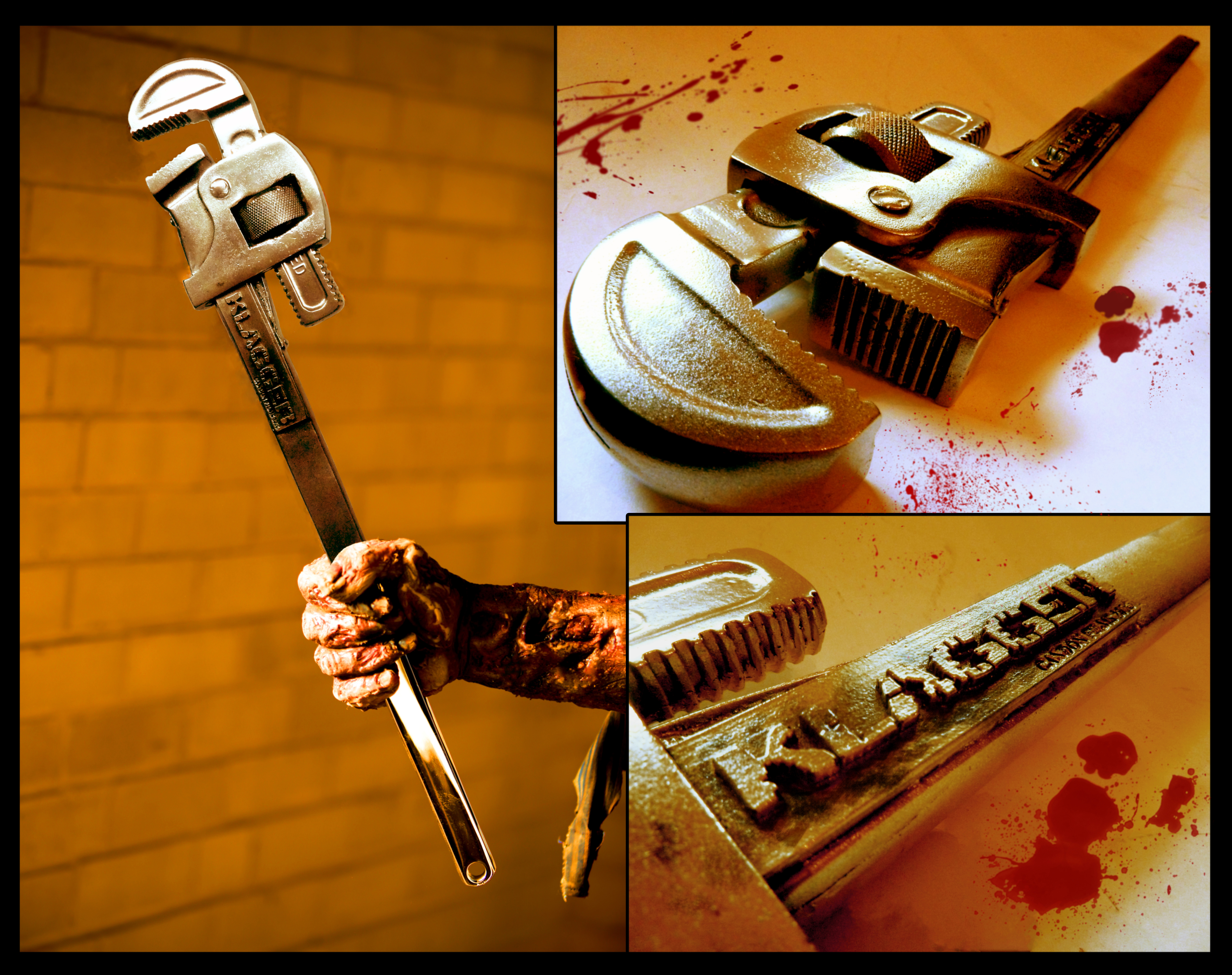 EW: How has growing up in Texas influenced you as a filmmaker?

CC: I live in a region where it’s basically HOT most of the time, so most of
the stories I come up with take place in dry, arid type environments hence
the aforementioned “Tojenkawa” which takes place in the West Texas Hill
Country and Klagger which takes place in a “Hellishly Hot,” old factory! I’d
love to make a movie in snow someday but we are snow deprived.

EW: What are some of your cinematic influences as a filmmaker?

CC: There are so many great filmmakers to draw inspiration from, Stanley
Kubrick and Sergio Leone being the obvious ones if your fetish is composition. The best “actors” directors in my opinion are Scorsese or David O. Russell. Lately, I’d say Ben Wheatley (Kill List) and Nicolas Winding Refn (Neon Demon) are doing the most artistically interesting stuff.

It’s cool how art-house directors like the aforementioned use horror imagery and styles for what is basically straight dramatic movies. Years ago, a movie like Black Swan would’ve been a psychological drama with no special F/X. Now days, even a drama set in the world of dance can have horror movie, type effects! Genre films have really influenced everything we see.

That’s what I’d like to accomplish with the Klagger feature. A solid dramatic story with excellent gore and fine performances. A good example of the type of film I want to do would have to be, “We Are Still Here.”

CC: I consider JAWS a horror film and since it’s my favorite film of all time
I usually start there when somebody asks. Ridley Scott’s, “Alien”
is pure a piece of pure brilliance and I think most people, even people who don’t typically watch horror films would agree with that. Tobe Hooper’s original, “Texas Chainsaw Massacre” might be the most
perfect horror movie ever made. I mean, THAT is a HORROR MOVIE!

EW: Are there any “current” horror filmmakers that you are excited about?

CC: I personally believe we are in a horror renaissance right now that just makes my mouth water.

“The Walking Dead” is the number one show on TV and great horror films are
coming out constantly. I already mentioned Ted Geoghegan’s “We Are Still Here”- great movie! I also felt that “It Follows” seemed totally original. I’m also a big fan of Adam Wingard’s family drama/siege film, “You’re Next.”

EW: What is the public’s response to seeing “Klagger” in person when you bring him around to film festivals and screenings?

CC: Klagger gets a huge response at conventions especially from “ahem” women! John Harlan, the actor who plays Klagger has been grabbed and licked in some very interesting places during his time in the costume. There seems to be something in the female psyche that really…”” on monsters and undead creatures like “Klagger.” I don’t get it! Haha

EW: If you could choose any actors/actresses currently working in the
business to cast in your films, who would they be and why?

CC: In regard to Klagger, I would really love to have Ronny Cox (Robocop), (The Beast Within) in the movie.

Why? Number one, he’s an amazing actor and we want Klagger to be filled with great performances. Two, he’s a musician and Klagger’s best friend is a country music player. Three, because Cox is at an age where Hollywood seems to forget about the great character actors. It would be so cool to have everyone suddenly talking about how great guys like Ronny Cox were and still are!
EW: Who is Pat Murphy and the Cimarron Cowboys? Their song is featured in the short film and still haunts me at night!

CC: Everybody knows someone who started a band, played a few gigs, gave it
their best and never made it to the big-time. The 45’s they recorded to hand
out to radio stations and promoters still sit in closets and garages, collecting
dust, waiting for someone to re-discover them.

Cut to 2009. I’m working on the Klagger script, thinking about music. What would be most appropriate for a West Texas Horror Film and not be cost prohibitive to license? Suddenly, I remembered my childhood friend, Sean. His Father played in a Texas Swing band in the mid 1960’s and they never made it to Nashville, But, there was a recording! Sean gave me the 45 which read “Pat Murphy and the Cimmaron Cowboys.” It couldn’t have been more perfect!

EW: Do you have any dream projects that you want to make in the future?

CC: Right now, Klagger is my dream project! My brother Gene and I have been working on this project steadily since 2013. We can’t wait to show it to
the world!

Erick Wofford is a writer/director and independent filmmaker known for his award winning short film, “The Music of Erich Zann.” He is currently in production on his first feature film entitled, “Splatterpunk!“