Legacy of Darkness: Portrayal of Vampires

Throughout history, the human mind has conjured up many strange creatures. From the Ancient Egyptian Sphinx, the Ancient Greek Minotaur and Medusa, to dragons from different cultures, orcs and...

Throughout history, the human mind has conjured up many strange creatures. From the
Ancient Egyptian Sphinx, the Ancient Greek Minotaur and Medusa, to dragons from different
cultures, orcs and goblins, and more. We have always conjured monsters to explain things,
scare others and create epic myths. These inventions have stood the test of time, with
countless of these imaginary beings still appearing in our stories, whether that’s books, film,
television, video games, comic books, tabletop RPGs, music and more.

One of these monsters that has stayed with us and continues to fascinate us is the vampire.
These pale, undead spectres who haunt victims and steal their blood, have magical powers,
and hide in the shadows have remained popular to this day. With each passing year, we see
them in more and new ways and they continue to scare and intrigue us.
The first major depictions of vampires would be in novels. The nineteenth century brought us
some major contributions to vampire fiction, with John Polidori’s The Vampyre and Sheridan
Le Fanu’s Carmilla and of course, Bram Stoker’s Dracula. These stories are regarded as
classics and helped establish vampires as we know them today.

One of the major depictions of vampires in film is Nosferatu. This silent 1922 German film
was one of film’s first horror movies. Nosferatu: A Symphony of Horror was directed by F.W.
Murnau and starred Max Schreck as Count Orlock. This depiction failed to have the rights to
Dracula, so they took liberties and changed things to avoid similarities. To this day,
it is still considered one of the best horror films ever, despise being nearly one-hundred years old.
Schreck’s performance and the imagery it uses keep it a films well worth watching.
Since then, we have seen countless vampires in dozens of movies. These can be straight on
horror, with examples being Salem’s Lot and From Dusk Till Dawn, or they can be more
action focused, e.g. Blade. We’ve also seen vampire romance in the Twilight movies, drama
with Interview with a Vampire, an adventure takes with Dracula Untold, and countless others
have had their own vision and take on the lords of the night. Popular TV shows to feature
vampires include Buffy the Vampire Slayer, Angel, Preacher and Being Human.
Vampires have also been apart of wrestling company WWE, which have included Gangrel and Kevin
Thorn.

Vampires are a common creature in video games. Countless games have included vampires
or vampire-esque characters as heroes, villains and generic monsters. Kain is a heroic
vampire, while Vamp from the Metal Gear series is a villain who bases his guise on them to
frighten his enemies. You can find vampires in many types of games, such as RPGs that
have had vampires involved, e.g. Skyrim and Final Fantasy VII, Ooh Aah Dracula, and
fighting games often have them as playable characters, with Darkstalkers, Killer Instinct and
Guilty Gear all featuring a vampire. 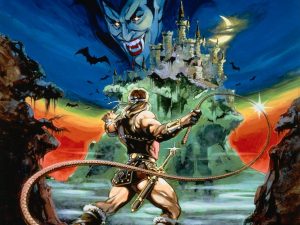 The Castlevania series is heavily rooted in vampire fiction, with Dracula usually appearing as
the main antagonist. He did appear as the protagonist in some Castlevania games, most
notably the platform spin-off Kid Dracula. His son Alucard is also featured prominently. In
2017, Castlevania reached a new audience, Castlevania III.

Vampires had continued to find new fans over time, with new mediums giving them eternal
life outside of their stories. As we go into the future, it’s likely we’ll never see the end of their
popularity immortality.