LOVE IS DEAD THROUGH THE EYES OF HORROR FILMMAKER JERRY SMITH 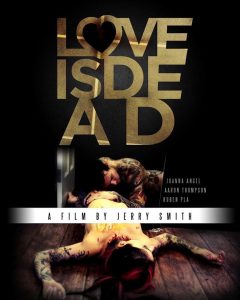 Written and directed by talented writer and journalist Jerry Smith, LOVE IS DEAD is a short film starring Aaron Thompson as Peter, Joanna Angel as Mara and Ruben Pla as the therapist. Split between the present and the past, we find the story of Mara’s death told from the perspective of Peter during his first session with a therapist. Listening intently, the therapist offers safety for Peter’s pain as we learn what the consequences of unfaithful behavior maybe to more people than you might think. The recounting of Mara’s death takes place in the once happy couples bathroom and shower. As Mara confronts Peter with the suspicion of him cheating on her, we see the various stages of admission flow one into the next to a very painful truth that shakes their relationship, trust and life to the core. Upon finishing the story, Peter must deal with the guilt after years of repression, the reaction to his sin and the understanding that he is no different than many other men that have come before the therapist.

LOVE IS DEAD hurts me to watch. Being someone who has dealt with the themes of this short film, the raw emotion and portrayal of the fragile line that is a relationship no matter where the couple may come from hurts. For those who have never been through what may be one of the worse moments in a couple’s let alone a person’s life, feel lucky as you ever have been. To be cheated on, lied to and felt like you are not good enough or you could be better than that person now selected over you or hoping that they will love you even though you have been wronged it just plain horror. It is a reality that many share no matter what side you are on. Bravo to Smith, cast and crew for handling this subject matter with a respect and dramatic way. Smith, who has been around all the dark corners of horror for many a year now understands how to harness personal tragedy and reality into the horror formula that we find with LOVE IS DEAD. His writing is very honest and palpable as we see the growing understanding and tension mount to an unspeakable cliff that fits tragically wonderful for the character of Mara and what has been felt for many I am sure when faced with temptation, bitter truth and hate. 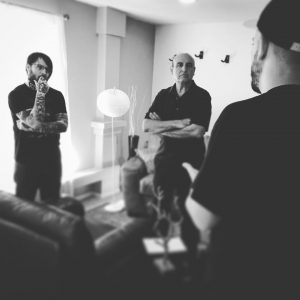 The casting is unusual to say the least as we see Thompson and Angel playing roles usually casted by much more cookie cutter figures. For Smith, it is a brave casting and one where these two performers have a real tone to them rather than traditional performance training. Watching them unleash and cut deep into each other with the mounting and honest dialogue, you understand Smith’s thinking both from an emotional perspective as well as visual one. Why I was not a fan of the open shower set that the conversation and confrontation takes place, I understand the logistics to the sequence and the idea that even in the shower where it is supposed to be safe, that vulnerability spider webs and nothing is off limits including sex, hate and death. I felt the open show was more like a stage which took a way the reality for me. However, you see where Smith, Cinematography Zach Shildwachter and first Assistant Director BJ Colangelo were pulling inspiration from films like PSYCHO and the remake of THE GRUDGE.

As much as I feel it takes away with the sequence, Smith and crew are wise to not only implement an homage to the classic old school horror programs but tap into the late night, chilling score that fans found in programs like THE TWILIGHT ZONE and the OUTER LIMITS. Between the score composed by Josh Soriano (especially in the final moment of the flashback) and the sound team of Shawn Duffy and Shannon McGrew, you feel like you are transported into stages of pain and pleasure with each thump, suck, sob and moan. I also applaud Smith and actor Ruben Pla for not making it a happy and therapeutic ending. This type of short needed a painful smack to those watching thinking that Peter will be forgiven. It would have been so disrespectful and it would have been bullshit time if Smith had gone that route. Knowing him some, it is exactly what I had hoped for. 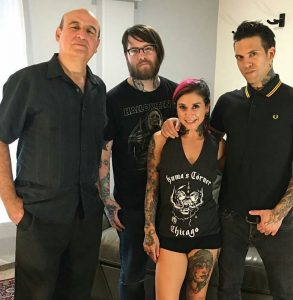 Overall, I have no doubt the limited resources and low budget effected the short film on several levels. However, at the same time, it’s was an effective and creative tool to cultivate the raw tone and feeling that is the foundation of LOVE IS DEAD. The true shining aspects in this dark drop off a cliff is the release in the writing for Smith and the performances of Thompson, Angel and Pla who at times were a bit overdramatic but in the end, they all brought ample power, pain and honesty to a real horror. LOVE IS DEAD is for mature audiences with very straight forward sexuality, nudity and intense action that hooks you, frightens you and respects you. The visuals, edit and framing find a balance of what you see on screen and what is implied that will stick with you. Bravo to Jerry Smith and his cast and crew for a truth and hard short film that is free to watch and available at https://vimeo.com/183589753 to watch if you dare…