“Make a plan and try to stay calm.” 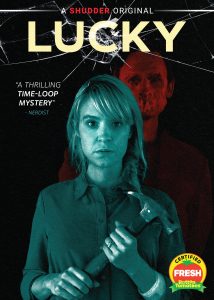 Lucky is one of my new favorite thrillers! Strangely compelling, though a bit confusing at first, director Natasha Kermani, utilizing a fantastic script from lead star Brea Grant, takes us on a tension-filled rollercoaster, while examining how likely women are to be victims of violent crimes, and the way other people handle it. Often chastised for the way they dress, for being crazy enough to be outside without a companion, or even living alone, women also blame themselves for many things that are not their fault. It seems to be a sad part of our culture.

Synopsis: Self-help book author May Ryer, finds herself the victim of a stalker who returns to her home night after night. When no one seems to take her seriously, she must take matters into her own hands. 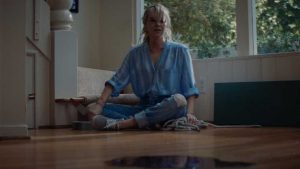 We begin by meeting May, (Brea Grant) an author who ironically writes books to help women, but we will see soon enough that May has trouble helping herself. Her book sales are down, and her signings are lean, but she continues to keep up the happy face. Once home, in a place where she should be safe, she wakes up in the middle of the night because she hears a noise and sees a man standing on the lawn outside the window. Her husband, Ted, (Dhruv Uday Singh) goes down to take care of it, but ultimately it is May that takes the intruder out and saves his ass. What makes it weird for May, other than the obvious fact that she just killed an intruder, is Ted’s comments. He tells her everything will be fine, he’s probably gone (the body has disappeared), and that he is just the guy who comes every night to try to kill them as if that is the most normal thing in the world. Wait, this has happened before? She oddly doesn’t remember.

Partly a satire of home invasion slasher films, part Groundhog Day and part Alice Through the Looking Glass strange, we must be on the lookout for the different themes layered throughout the film. The most important theme to me was the idea that if we as women (you may have guessed I am female) survive to face another day or do something successfully, that we are just plain lucky. Bullshit if I ever heard it, but I agree that is how society looks at us, even now in 2021. 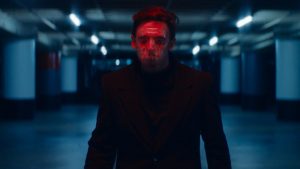 “The Man” (Hunter C. Smith) who comes for May every day is a great danger to her, even if he isn’t real. She keeps killing him and he keeps on coming back. Her frustration grows in leaps and bounds, because everyone, including her sister-in-law, the police, EMTs, social workers, etc.. do not listen to anything she says. They all treat her like she is a bit light in the head, hysterical, or even making it up, and she should just rest and take a nap.

She is on her own. Blood is spilled when she kills him, we see it, and she cleans it up, but is it real? Is this killer a supernatural entity, or is May the only one who sees the truth?

In the end, she listens to advise from her book “Go it Alone” and takes things into her own hands. At that point, she sees more than she counted on. Every woman’s greatest fear is personalized with a different man attacking them. Realizing the plights of and the dangers to women everywhere, May is caught in a nightmarish loop that she can never escape from.

Though ending with somewhat of a cliffhanger, which I normally would dislike, I really loved this film. It made me think seriously about what I feel is my role as a woman and whether I feel like a victim. What makes this such a dangerous world for women, and is it possible to help ourselves if we ignore the problems of other women around us?

In many moments in this film, May is told she is lucky. But that is so unfair, especially when it’s pointed out how hard she works just to survive in a man’s world. I totally empathize with her. I was caught off guard at how emotional Lucky made me feel! May has a mystery to solve, and it was incredible to go along with her on this journey.

Lucky is available on Shudder, and you need to watch it now! The cast was perfect, the acting incredible, and the script was so well-done! This is the perfect film for a night in with a group of friends; it is uncommonly thought-provoking. The film brings up so many things we need to talk about and understand! Brea Grant is really making a name for herself in writing as well as acting. I’m gonna keep an eye out for her in the years to come. Lucky is a definite must-see thriller!

Lucky is available on VOD, Digital HD, and DVD on
August 3, 2021, from RLJE Films