This amazing haunt maze at the Oregon School for the Deaf is an annual Halloween event not to be missed!

This past year has been a biggie for your zombie girl. Relocating to another state and having to give up my favorite job in the world, doing monster makeup at Knotts Scary Farm, was difficult at best. I was so lucky to discover that Salem just happens to have one of the coolest haunts in the nation and was honored to get a chance to continue to do monster makeup again. The Nightmare Factory is a huge and amazing haunt maze, run as a fundraiser for The Oregon School for the Deaf. As you can see in all the photos I took- it is quite a place, full of clowns and all things creepy! I did the makeup on some of these folks and they still scared the crap out of me when I walked through the 12,000 sq ft maze! They were awesome and horrific at the same time! 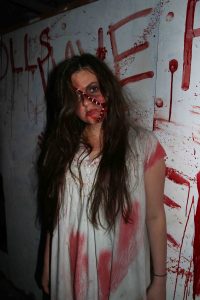 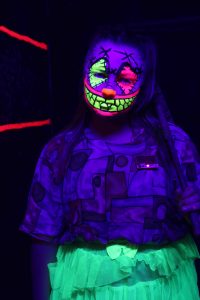 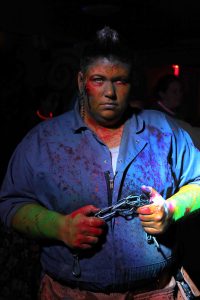 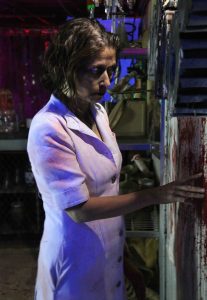 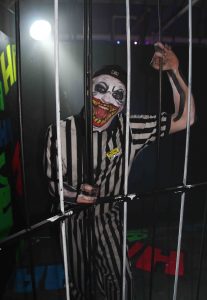 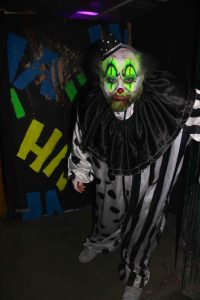 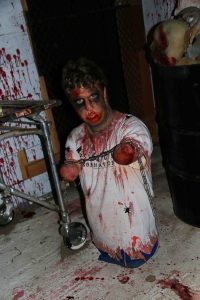 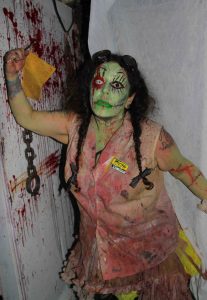 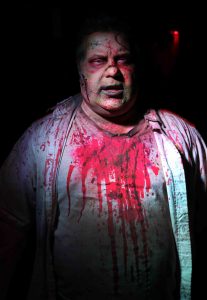 I decided that to get the whole picture, you needed to hear about it from the evil mastermind and co-creative director himself, Ed Roberts.

Los Angeles Zombie Girl: Hi Ed! How did the concept of The Nightmare Factory come about?

Ed Roberts: “I had worked at several haunts in California prior to moving to Salem. I also co-owned and operated several haunts in Ventura. So, when I started working at the school I asked to open a small haunt as a fundraiser.”

LAZG: What is so important about The Nightmare Factory and how long has it been running?

ER: “The Nightmare Factory has become a part of Oregon tradition now. For a lot of people, it is Halloween, and many of them come not really knowing that they are on campus, or that they are even helping us help the school.”

Then there are those that have been coming since they were kids and are now bringing their kids with them. Our school has become a part of their family. The Nightmare Factory was going to be this little fundraiser that would help OSD, but I never imagined it would ever become what it is today. This year marked our 30th year at the Oregon School for the Deaf.”

LAZG: Why is it important to fundraise and what kind of things does the money go for?

ER: “The haunt does well for the school, but it’s not so much how much money is raised, but that the students gain a sense of pride in being able to give back to the school in such a creative way and to provide such an amazing tradition for the community and the Northwest!

The money is used for everything from books to gym floors, trips to D.C. and trips to haunt conventions like the West Coast Haunters Convention. We have helped provide iPads and laptops, new covered playgrounds and so much more.”

LAZG: How can you afford to put on such a huge event every year?

ER: “Over time we have accumulated many props, that and we set aside money for upcoming years. While this is a fundraiser, we treat it like a business.”

LAZG: Is there a program at the school for the kids to learn about the actual making of a haunt from beginning to end?

ER: “Yes, we offer after-school workshops and hands-on classes to teach our students how to run the haunt.

LAZG: I heard you guys were part of a TV makeover show!

ER: “We were! In 2010 the crew from Extreme Makeover Home Edition came to OSD and not only built us an amazing multipurpose building (it was meant to be a dorm; however, it is now used for so many amazing events and gatherings). They also helped save The Nightmare Factory.

You see, at the time they had decided to help us; the haunt was in dire need of a cement floor. Our dirt basement was no longer suited for such a huge event. We were in the process of pouring concrete pads, the forms were up, but it might have meant that we were closed for a season.

EMHE came along and saved the day. They had a new concrete floor poured in the entire basement, almost 12,000 square feet, then they built a new haunt for us. This new haunt was built in a small part of the basement, they only had a week to get all this done! That one act of kindness helped put us on the map!”

LAZG: Who makes the Nightmare Factory happen every year?

ER: “There are two co-creative directors, myself and Kivo, a former student at the school. Then there is the core student group. Plus, we have been blessed with a large group of very dedicated volunteers from the community!”

LAZG: Why are the volunteers so important?

ER: “To volunteer is to become a part of The Nightmare Factory ‘family’. It is a way to give in a way that means even more. We have volunteers that have been with us for 20+ years. We have such a dedicated team of builders, makeup artists, actors and front of house staff, and it amazes us each year to see them return. Then there are those that are a part of the year-round process. They are there for weekend work parties and weeknights for the after-school program.”

Thanks, Ed! To find out more about The Nightmare Factory and be scared during its 2018 run, volunteer or to donate- check out their  Facebook page! I can’t wait for next year! 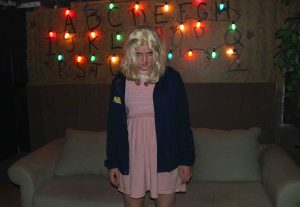