Trevor and Carrie Juenger have been creating dream-like world scapes full of fantastic and horrific themes and images. Probably best known for the feature film Coyote starring the arresting Bill Oberst, Jr. and the unsettling stop-motion animated short Crabs in a Dollhouse, this filmmaking team is creating a newly anticipated feature Man in room 6.

Trevor, talk about Coyote, Dope and some of your other past projects.
I think both of those projects were crucial to my development as a filmmaker. From
Coyote, I learned how to work with performers. I’d done plenty of that prior, but working
with Bill (Oberst) was a different animal. He brings so much naturally. The best way to
approach him is observe closely, find things you like, and emphasize those things. In
life, I tend to overcomplicate things, but while directing, you need to keep things simple,
clear, and natural.
I adapted strategies with actors in Coyote and continued that formula with DOPE. What
changed in those few years between projects was the approach to cinematography.
With Coyote every single shot was storyboarded in advance. Working with Dylan
(Schnitker) as a director of photography was eye-opening. There was no previz, just a
shotlist and rough outline. You wouldn’t expect that to be super effective, but it worked
much better than storyboarding. At this budget level, you have to adapt your vision,
sometimes on the fly. Locations might not have enough room to get that wide shot you
want, the weather might change, there are so many chaotic variables. Having an idea
of what you want, and then changing it when something doesn’t work or something
unexpected works really well is essential.
Both projects are out there, and I love some aspects of both of them, but I generally
think about them critically. You can’t get better if you pat yourself on the back too hard.
That time has passed for me and those projects.

Carrie, talk about your short film projects. How did you get interested and involved in
experimental short film?
I’m a fan of poetry in motion, music videos and experimental shorts that tell a story
through visuals and are based in an emotion or feeling rather than telling a straight
narrative. My trilogy of short films starting with, most notably, ‘Crabs in a Dollhouse’ are
a solution comprised of poetry or writing given to the viewer in the form of voiceover and
experimental visuals of animals that I use to symbolize a combination of emotions and
actions. My degree is in Studio Art with no chosen major because I wanted to learn to
speak through all media at once and choose which is most appropriate for the message.
In their intended and original format, my short films are projected onto various objects
and installations. ‘Jellyfish’ was projected onto a very large tank of water in a small, dark
room filled with sopping wet and dripping textiles. ‘HORSE’ was projected onto almost
1000 hand built ceramic horses placed on thin shelving, above a large altar adorned
with horse hair, blood, dried herbs and other things of the like.
Working in this way really helps to enhance the visions in Trevor’s scripts. As I read
them, I feel them and try to recreate or communicate what I feel through set design and
props. When I’m viewing the shot its important for it to ‘feel’ right where camera
department is making sure it looks right. 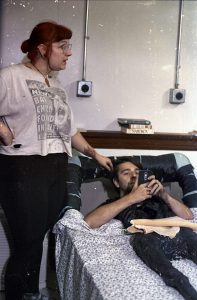 What is it like and what is the process of working together as a team on projects?
Trevor: To be honest, Carrie has played such a vital role from my very first experiments
in film, I don’t know what it would be like without her. Her interests in the production
phase fill all of my blind spots. She’s another set of eyes when I’m confused about
something. She’s an interpreter when I have trouble communicating. People don’t
always read the credits, but you’ll notice a significantly shorter credit list than other films.
Carrie and I are responsible for every one of those departments that are absent from
our credits. It feels amazing to have your fingerprints on every element on screen, but
it’s also incredibly taxing. Carrie is amazing. She keeps the engine running.
Carrie: I work in short film because I think and communicate in short bursts of emotion
that don’t need a lot of time to communicate. Trevor does the opposite with his feature
projects. He weaves tons of short moments into a long narrative. ‘The Man in Room 6’
comes out to be almost 200 pages. He stretches my speaking through visuals in a way
that I never could. Everything I do is experimental and short because I can’t keep my
thoughts together for a long string of combined moments, but Trevor makes that
possible for me through his 200-page long guidebook, a way that I have come to think
about a script. We make the perfect team. I highly recommend working creatively with a
life partner because you can understand and communicate each other’s visions with
more clarity, and your access to one another is not limited to meetings, they’re a flowing
constant. 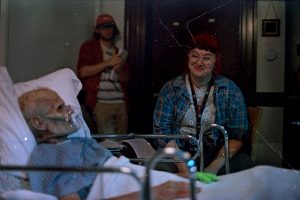 Tell us about your other creative projects in the non-film world.
Trevor: I’ve managed to make film my life. I teach film theory and production at the
college level. I freelance from time to time. I’ve tried a few things to broaden my
horizons, but it’s always with the caveat that whatever I’m doing will make me a better
filmmaker. I do help with Carrie’s non-film projects, but it’s usually in a much smaller
role.
Carrie: I work visually in a lot of ways. I run and distribute a free-form art zine, and I
contribute my work to other zines in the area. My sketchbooks are filled with installation
plans. I work in ceramics when I can sneak into the ceramics studio after hours at a
former University. I’m currently getting into shaping stone and I would love to have wood
turning in my near future. My creative brain is everywhere and my projects are never
ending. This, all on top of the immersive nature of our film projects.

Tell us about your current project Man in Room 6
Trevor: It’s an epic horror-fantasy film. If we don’t cut a significant portion, we’re looking
at a two and a half hour feature. It’s been a massive undertaking so far, and we’re only
about a quarter of the way through production. The idea started as a novel, but I’ve
been so invested in film, that I couldn’t imagine it being told with just the words on the
page. It borrows from my favorite classic horror elements, but I like to think I approach
them a little differently than other storytellers.
I think the concept started several years ago. I was talking with an actor about how life
could be extended dramatically in our lifetimes. His response was that that was
terrifying. That struck me as really odd, but the more I thought about it, the more it
seemed to ring true. All of those people who have lost their minds and control of their
bodies in nursing homes is something people try to avoid thinking about for a reason.

Tell us about your crowdfunding campaign and give us a link, please.

Trevor: Crowdfunding is tough. There are a ton of projects out there, and a lot of them
are great concepts. It’s difficult to elevate your project beyond all of the others. The
support we’ve received early on has been really great, but we need to reach beyond our
established core, and convincing someone completely new to you to give you money for
something they aren’t absolutely sure about is a pretty hard sell.
This is our first experience with the Seed&Spark platform. They’ve been super cool.
They work strictly with films, and give you feedback about your campaign. I’ve had
master’s degree level marketing courses, and what they tell you matches perfectly to
what’s taught in those classes.

Any other projects or project ideas for the future?
Trevor: I’ve had a few ideas floating around, but I like to think I have an internal filter,
and if a project idea can stick around long enough to still be there when I finish this film,
then I’ll act on it. If not, it might not have been that good of an idea. I have a few
completed scripts, but they’ve been either too expensive to produce or so wild that any
sane performer refuses to do it.
Carrie: I’ll definitely be producing Trevor’s next project after ‘The Man in Room 6’ is
wrapped. I’ve also been chewing on a concept for about 2 years involving taxidermy
mice and the sinking, guttural rawness of experiencing death. As soon as I get grant
approval, that will be my next short.

Where can people find out more about you and your work?
Trevor: vimeo.com/juenger is a good place to start. I’m on the major social media
platforms. Search my name, there aren’t many Juengers.
Carrie: Same here. We mostly work as a creative unit when it comes to film. That’s why
we’re being interviewed together. It’s all about teamwork and bouncing ideas 24/7. My
work can also be found on vimeo.com/juenger. I have a trilogy of short films on there
that spanned about 5 years, ‘Crabs in a Dollhouse’, ‘Jellyfish’ and ‘HORSE’.