Mars Attacks: Occupation is a sequel to the classic trading card series!

Mars hasn’t attacked us since the 1960’s, so it’s about time they came back with a vengeance. Enter Mars Attacks: Occupation! For those of you that don’t know, Mars Attacks! is a 60’s trading card series made by the Topps Company, & became well known for its grotesque imagery. Most of you probably have at least heard about the Tim Burton movie (also called Mars Attacks!), but if you ask me, it didn’t do the original series justice. First of all, it wasn’t gory enough. I mean, look at this. 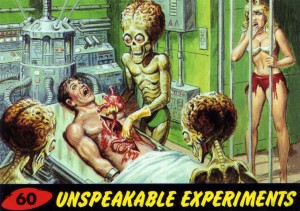 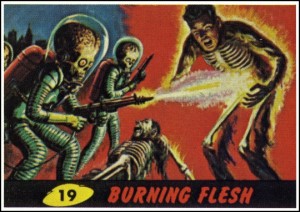 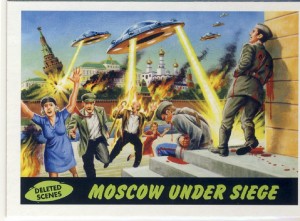 That is not imagery for a PG-13 movie…that’s full-on hard R territory! If anything needs a rebooted film, it’s Mars Attacks!, no question! But that’s not what we’re here to talk about. Oh no, we’re here to talk about how awesome it is that Topps is actually making a sequel card series to this fantastic contribution to the sci-fi/horror genre! Hot damn! Now only if they can bring back Dinosaurs Attack! Oh, wait a minute, not only can they do that, but they will if they succeed to earn more than their Kickstarter goal! Mars Attacks vs. Dinosaurs Attack! I shit you not, my friends. They are willing to do it, so we all have to band together to show them that we want it!

The sequel series, Mars Attacks: Occupation, is a whole new complete card series continuing the story of the original Mars Attacks complete with new art, special rare cards, cool rewards (for those who contribute), & lots of other neat stuff! Not only that, but they also made an awesome stop-motion video advertising their new product! Check it out!

Now I’m not saying you should just give them money so I can be happy & get these new cards for my own personal gain…who are we kidding, that’s exactly what I’m saying! Seriously, if you have not seen the original card series, worry not! Turns out, the publisher Abrams ComicArts has actually released a comprehensive book that includes all the original cards plus more! Here’s a link to their official site so you can pick up a copy! Or don’t if, you know, you don’t like great things & are a loser. Totally understandble…punk.

I, for one, am flipping my shit about this. The original card series if one of my favorite stories of all time, & is well worth checking out. You can support the sequel series by helping fund their Kickstarter right here! Please do!…please…I need it…do it!