Jack, we have to kill your daddy.

We’ve been waiting three long years for the Eli Roth produced film Clown to make its debut in the US. So was it worth the wait? I was lucky enough to see Clown in the theater and I can tell you that yes, Clown lives up to the hype in more ways then one. The film is based on a short horror trailer that circled the net some years back and features one of the most terrifying clowns in recent memory. Why some children love clowns is a mystery to me (they have always been creepy circus pedophiles) and on his seventh birthday Jack is no exception. The entire birthday party is clown themed, but unfortunately for them they are missing the main attraction, the clown. Luckily Jack’s father, a real estate agent, finds an old clown suit in the house he is selling and saves the day as Domo the clown. That will be the last day of normalcy Jack’s dad ever experiences, as the clown suit simply won’t come off, no matter what he tries. Great body horror awaits as he becomes a clown for real. 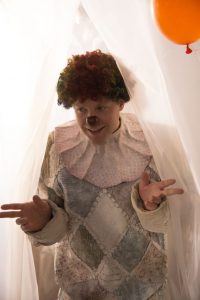 The film has a great clown mythology. You see clowns weren’t originally the brightly painted buffoons we know them as, but rather white creatures with noses red from the cold who live in the mountains and lure children to their deaths so that the clowns may feast. The clown costume is actually cursed skin and hair from one of the original clowns. The makeup effects during the various stages of the transformation into a clown are top-notch and the ending will leave you tense with fear. The earlier portions of the film contain some scares and even some dark humor that made me chuckle. The clown eventually gives into his voracious appetite and starts eating kids. In one shocking yet humorous scene the clown attacks a child bully while he is playing Halo. Gore splatters on his TV right as his avatar is killed and the clown feasts. 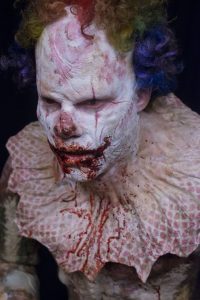 The main cast does a great job in their roles, although some of the supporting actors leave something to be desired. Eli Roth has a great little cameo as Frownny the Clown. Turn those frowns upside down because clown is scary and exciting with a tense atmosphere, body horror, creature fright, and some gory kills. There are some minor pacing issues, but I’m nitpicking here. Clown is best experienced in a darkened theater, but if its not playing near you don’t fret, because you can rent it on demand as well. Lets support this unique take on clowns and show Hollywood we want more original horror experiences and not the same thing repackaged year after year (I’m talking about you Conjuring 2).