Meltdown Memories: A Look Back at Street Trash

In Remembrance of the Melt

Street Trash is a dark, nasty little movie, one of the most deliriously trippy, screwed up things ever put to film. Following the kind hearted hobo Fred and his attempts to survive the struggles of living in the streets, a few of the more memorable scenes including a melting homeless man flushed down a toilet, a dude shoving raw chicken down the crotch of his parachute pants, and a game of keep away played with a severed penis. If that doesn’t get your attention, your a more jaded man than I.

But holy hell if this isn’t a seriously hilarious piece of fucked up entertainment. The first film from director James Muro, who would later gain fame for his Steadicam work with James Cameron, Street Trash is a brilliantly original piece of art, truly a film like no other. In a genre that can be as derivative as horror, its refreshing to see something truly new.

If you had to pick out one thing to remember this movie by though, it’s got to be a little drink called Tenafly Viper. 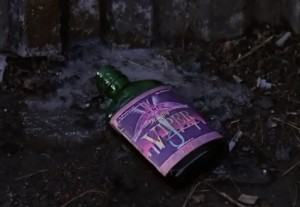 And while the severed genitalia and rampant chicken theft would have made Street Trash memorable, its Tenafly Viper that made it a legend. A expired liquor sold by the local narcotics store for a buck a bottle, Viper tastes like piss, burns like a mother going down, and has the disadvantage of fucking melting you. And holy shit, are these melts something to behold.

Instead of the usual blood and gore though, Viper turns you into something like what a drunken unicorn would vomit up. Neon blues and lush, tropical greens spew forth from what used to be the victims skin as they scream in agony.

What I love so much about the gore in Street Trash is the originailty.  Im sure if your a gore-hound like me, you’ve seen most of what the genre’s had to offer many times over. Dismemberment, eye stabbings, necks being slit; its old hat by now.

But as Monty Python once said  “now for something completly diffrent.” Like I said earlier, you really have never seen anything like Street Trash until you park your ass down and watch Street Trash. The violence is flat out bonkers, even by 80’s standards. Watching a liquifying woman pull out her increasingly oozy intestines is a sight to behold.

But while this gratuity should be sickening to the sight, strangely, it isn’t. Everything is just so over the top and silly to take seriously. Torwards Street Trash’s climax, we see a dudes head get blown off by a fire extinguisher, only to keep on trying to talk. And every time someone melts, its just so damn pretty, with all the vibrant colors and alluring shades. I never thought id use these words in context with homeless people, but it’s fucking beautiful. It’s grade-A gore any genre fan will love.

But the rampant, politically inccorect nonsense goes way beyond a couple of bums turning to goo. An obese, balding necrophiliac, nasty bum sex in a dump, the best reason ever shown to not use a glory hole; these are just a couple of the grimy tidbits your in store for. The characters are all memorable, if not exactly likable, but it’s their actions that stick with you, not their personalities, with one notable exception; Bronson. 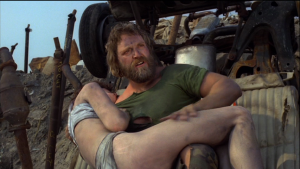 Holy shit, we can’t forget about Bronson. A veteran from Nam who carries around a knife whittled out of some poor saps femur and icing everyone who looks at him wrong, Bronson is one of the craziest sons of bitches ever put to film. The first damn scene we see him in has the herculean hobo being hit by car, only to get up, yank the careless driver out his window, and smash him face first through the fuckin’ windshield. Over the top? Sure, but in a movie where homeless people play football with a severed, semi erect penis its hard to denounce anything for being over the top.

Now, for all the praise ive given this damn film, there is no denial that Street Trash is a fucking mess. There’s about 10 different plotlines floating around, Fred, the supposedly 18 year old hobo, looks like he’s in his mid 30’s, and the acting is just a hair above your local crappy thespian troupes one act play. But goddamnit, the movie is such an unapologetic barrel of schlock that there is no way not to love it. You owe Street Trash at least one viewing for its originality, and if your a sick shit like me, i’m sure you’ll be giving it plenty more.