An interview with John M. Stewart 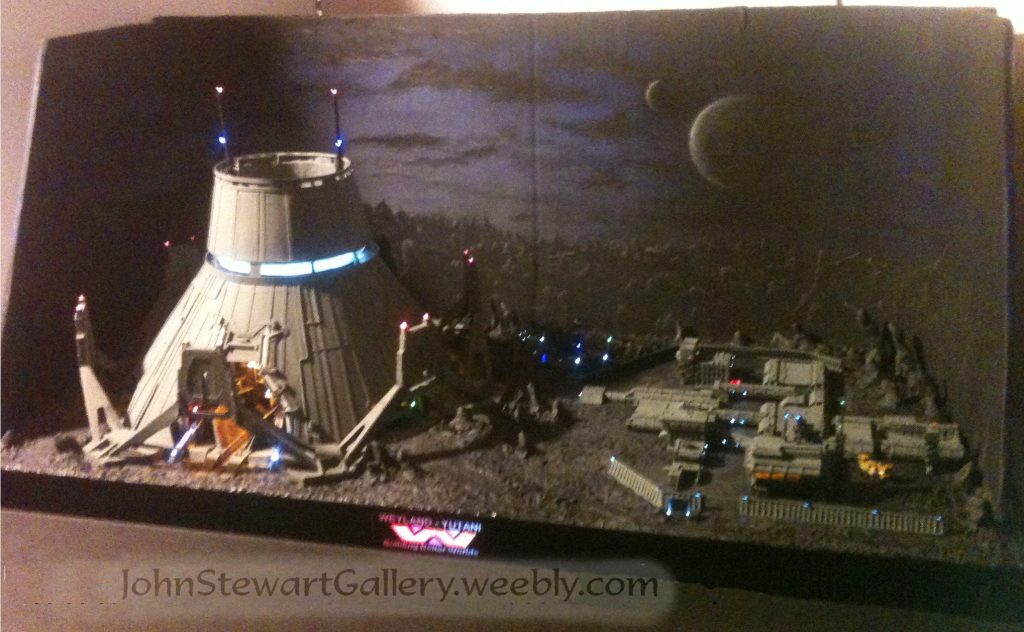 John M. Stewart is a mixed media artist specializing in movie accurate and highly detailed models and figures. He is also an accomplished painter and sketch artist. My interview with John is below, enjoy.

EW: How did you get started making models and figures?
JS: I actually started when I was a little kid. We grew up fairly poor, and my parents couldn’t afford the larger, more expensive toys. One Christmas, my dad built me an entire Hoth playset out of styrofoam and other household items. After that, my dad would help me build (mostly from balsa wood and whatever else was handy) other things in the garage like G.I.Joe and Star Wars vehicles.

I continued to sculpt and build as a hobby all my life, making small dinosaur dioramas for the local library, or just doing things for my own enjoyment, but never took it very seriously.

Finally, my lifelong friend Roger told me “Hey, there’s this woman making Nightmare on Elm St. paper mache’ houses on eBay and selling them for a pretty penny. I know you could do better than hers’. Make one and we’ll try to sell it.”

My first miniature house sold within a day, so I made a few more. Then I decided “Well, there are a LOT of “horror houses” in movies that people would probably like to own. Let’s try something harder. What about Amityville!”

And it basically went off from there. Roger is now my internet manager, which means he handles the selling part mostly. I primarily work with clients 1 on 1 when it comes to commissioned projects, but Roger still handles all the eBay stuff. We’ve been at it now for about seven years. It hasn’t made me rich by any stretch of the word, but it does keep the lights on and the kids fed, so I can’t complain. 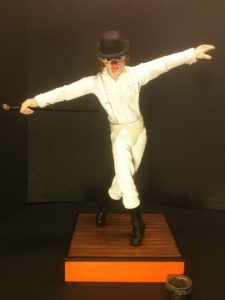 “Alex” from A ClockWork Orange

EW: How did you come up with the name “Korova Art Studios?”

JS: “Korova” is the name of the milk bar in A Clockwork Orange. That collection of strange artwork coupled with drugs and elegance. But essentially it’s where Alex and the droogs would prepare themselves. That seemed like a cool metaphor for an art studio.

EW: Can you tell us a little bit about the process from idea to completion?

JS: It’s about 50/50 when it comes to ideas for new projects. Some are requested from clients, while some I just think to myself “Yeah, that’d make an awesome model.” I mostly work from client requests though because…they’ll pay for sure. My own ideas sometimes have to sit on the shelf for a while before they sell. lol. 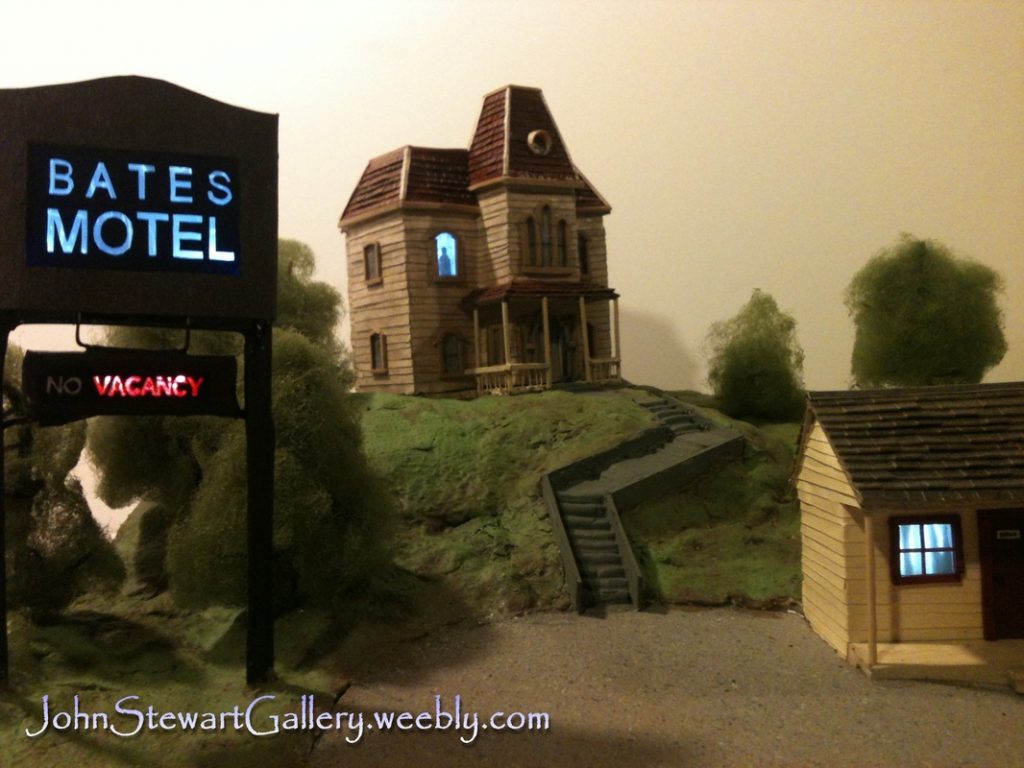 I’ll generally take an idea (say, a new horror house for example) and study it thoroughly; watching the film closely and researching on the internet. I never get too technical when it comes to planning though. Most of a build will be very intuitive, solving problems as I go along. I’ll usually just make a very simple sketch of the project to reference, but very few specific measurements or things like that. Having come out of the printing industry, I have a very well trained eye for things like alignments and angles, and much of the build will be simply “eyeballed” into how I think it looks best. This also gives a slight uniqueness to each of my models. No two are ever exactly alike, as they are all built off the cuff, by hand. Even projects I’ve done a dozen times (like the Amityville or Myers houses) are made just by looking at pics from my earlier versions. Each one usually gets a little better than the last one (in my opinion). 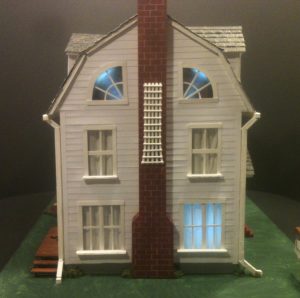 I can get much more technical and specific with measurements if the client is specific on it. Some collectors are extremely specific about these things. But, like everything else, this extra effort usually ups the cost of the project. So, people are usually happy with “the best I can do” in order to keep the price reasonable.

EW: How long does a typical “horror house” take to build?

JS: I would call the Michael Myers house a “typical” horror house build. It’s a fairly simple structure (not too many weird angles or add-ons). That usually takes about 30-40 hours. But, I’m always working on several projects at once, so from start to finish it can take several weeks (usually 3-4). A more elaborate house (like the Texas Chainsaw Massacre house for example) can take 50-80 hours, which is why each house is specifically priced, and prices can even be adjusted depending on the client’s specifications (with or without LED lights for example).

For the most part though, when it comes to horror houses, I generally tell my clients a month/ month and a half; depending on which house I’m building and my schedule. 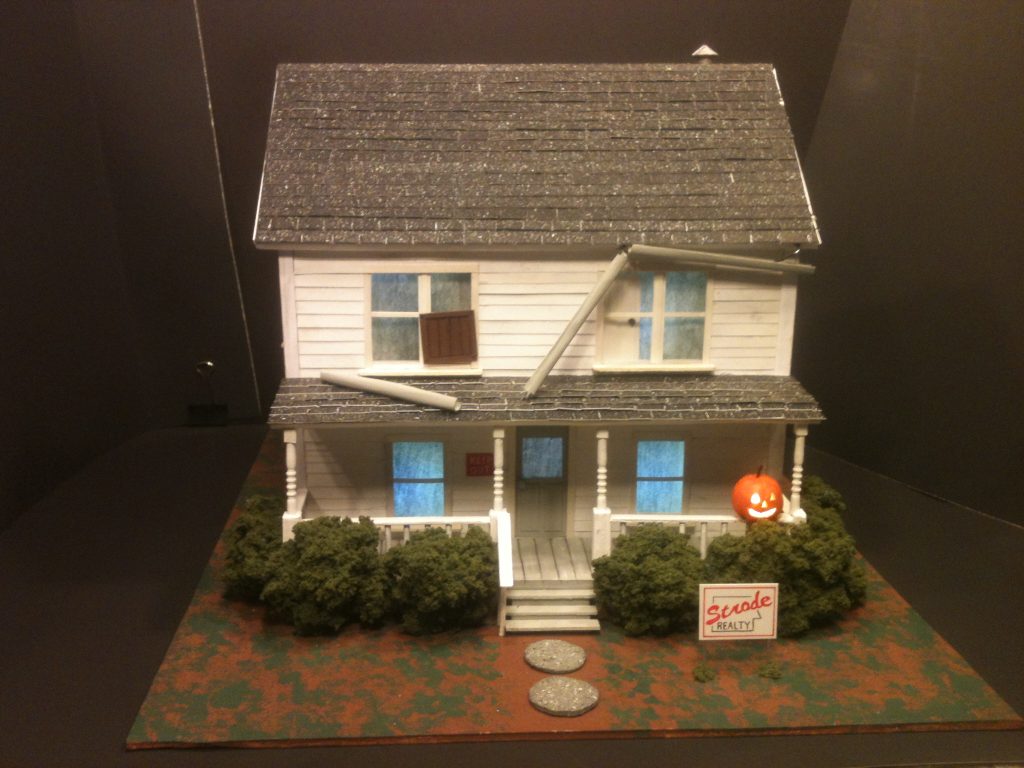 “The Myers House” from Halloween.

EW: What models are you most happy with their outcomes?
JS: I’d say my favorite was/is the Aliens: LV426 Hadley’s Hope Colony miniature. For it being the tiniest scale I’ve made, it’s also the largest (overall size-wise) and has the most elaborate lighting system which include dozens of tiny fiber optic lights all over the complex, along with flashing running lights and antennas.

I have only built one of these to date, but I’m finishing up my second one as we speak. 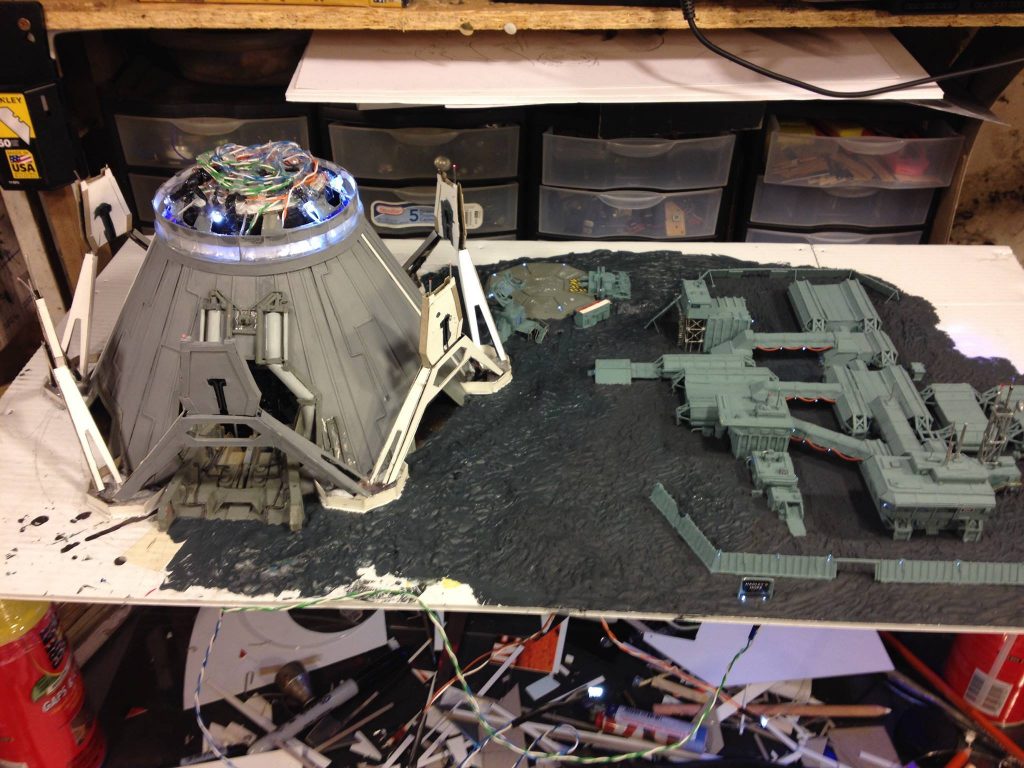 “Hadley’s Hope” from Aliens. A work in progress

EW: What is the most difficult project that you have worked on?
JS: That would definitely be Hogwarts castle. I’ve done it several times and it’s always a pain. Even a little more difficult than the Hadley’s Hope colony. It’s really awesome when it’s done though. It’s worth all the effort. 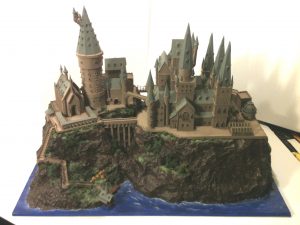 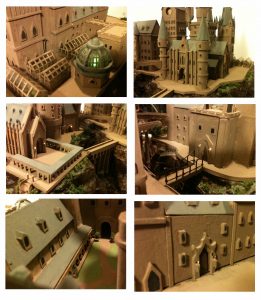 EW: What films have your models been used in?

JS: None really. Recently, some documentary filmmakers used my Pet Sematary diorama in a film called “The Road to Pet Sematary” (I think that was the name. I’ll have to check). They used that, and some charcoal artwork I had done.

Other than that, I got to design some cave structures for a horror film several years ago, but the project was canceled and never made it to screen.
I’d love to do screen-ready miniatures, but that’s a very different animal than collectibles. Collectibles (like I make) have to be sturdy and made to last a long time, while film models almost never last in good condition because they’re simply not made to. Very different techniques need to be used in each type.

“Greene Farm” from The Walking Dead

EW: What are some of your most common requests?
JS: Specific figures. Famous musicians and things like that. I try to gear away from these though because I’m not that great of a sculptor, and portrait sculpting is a very hard art. Doing monsters, characters with masks or distorted faces is much easier than trying to capture an actual person’s likeness.

My most commonly requested horror house is the Michael Myers house. I’ve done that at least 20+ times. 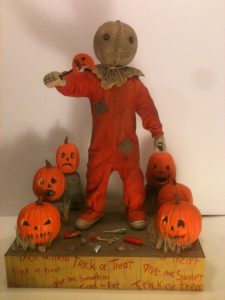 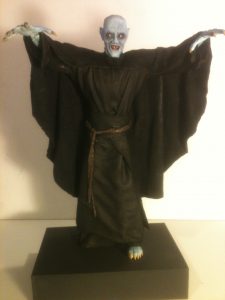 EW: What are some of your strangest requests?
JS: One specific request takes the cake. The project fell through, but would have been fun. The client wanted a full diorama of Pee Wee’s Playhouse, only he wanted all the characters from the show slaughtered around the room, blood everywhere, etc. He wanted Pee Wee standing in the middle of the room with a bloody machete. I would have LOVED to have done that one. Lol.
However, the creepiest request I ever received was to draw a charcoal portrait of a baby that had died. The baby was stillborn, and the parents had taken a picture and wanted me to draw it. However, after seeing the horrible picture (and having 3 kids myself) the project was just too disturbing, and I passed. 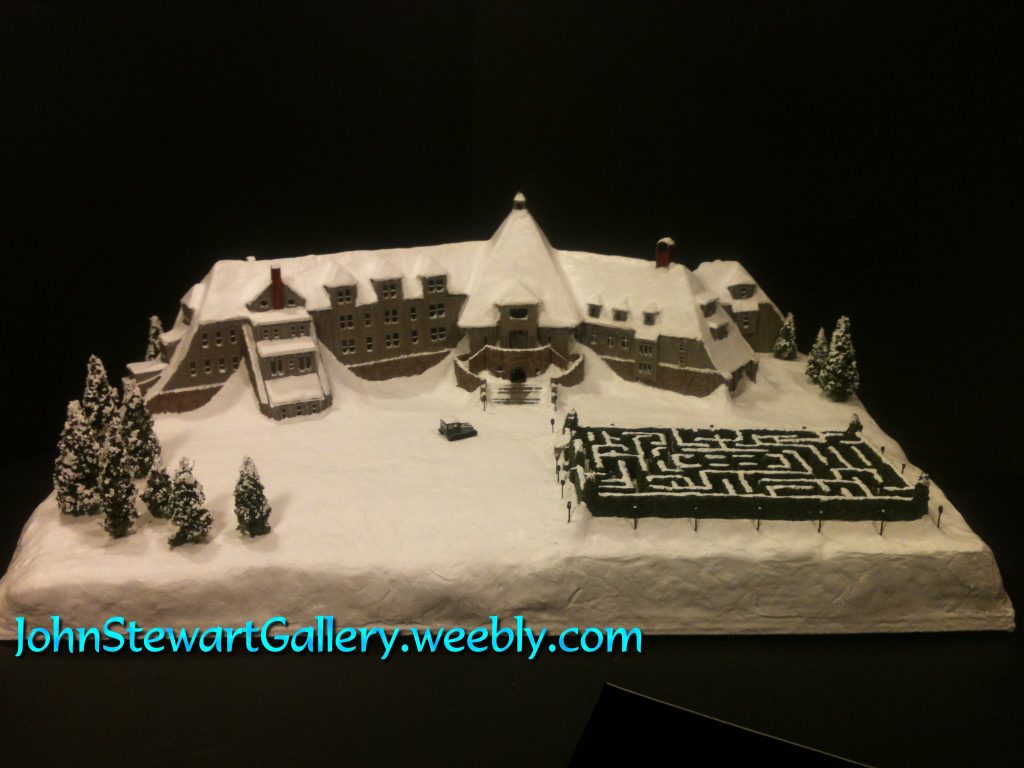 “The Overlook Hotel” from The Shining

EW: What is a dream project that you would like to build?
JS: Rivendell. I’d love to do a large scale miniature of Rivendell or another Lord of the Rings city.

EW: Are you thinking of adding any new themes for your work?
JS: I mostly work with horror and sci-fi, but have done all kinds of genres. Comedy; I’ve done things like the A Christmas Story house and Christmas Vacation. One or two others. I’d like to do a lot more comedies because there are some great ones out there. Fantasy: I’ve done a big Harry Potter collection, and some Lord of the Ring figures. As well as non-genre specific projects such as personal house replicas for clients. One client even wanted a few houses from old TV dramas like Falcon’s Crest and Dallas (weird, I know. But they turned out to be pretty cool looking).

I’m trying to make a living doing this, so I’m really open to almost anything. Hell, I even made the Cullen’s house from Twilight (which was actually a really fun build). 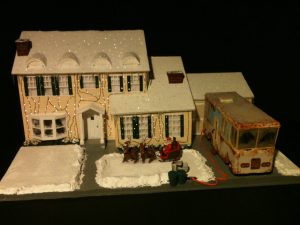 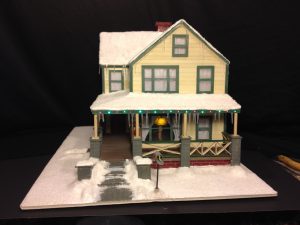 “Ralphie’s House” from A Christmas Story

EW: What do your friends/family think about your work?
JS: Fairly passive mostly. My wife, Amber, has been hugely supportive. But for the most part, everyone’s proud of what I do, but since it doesn’t make much money, it’s generally seen as an indulgence rather than a profession. I’m ok with that. No one disrespects what I do, they just don’t make a big deal out of it. But, I often host tours of my studio for my kids’ friends, who just walk around looking with their mouths open. It’s pretty fun.

As far as my friends, that’s just “my thing”. Everyone in a group of friends usually has some type of expertise. I was always the guy that draws well. But it’s no more significant than the mechanic in our group, or the computer expert, etc. I generally shy away from people who want to befriend me based solely on my work. People can have misconceptions of you easily if all they see is your work. 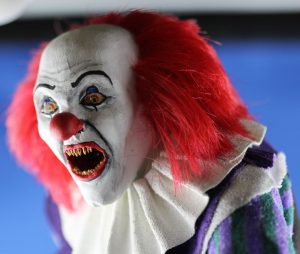 “Pennywise” from IT. Look at the detail on this one! 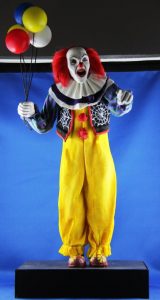 EW: What is your day job?

JS:  I’m a second generation printer (offset printing) and the industry has all but eliminated that profession with the advent of digital printing. It’s next to a minimum wage gig now, if you can find work at all!

I do art full time now because basically (as my wife puts it) we’re fairly broke either way.  At least this is something I’m good at and that people want, so as long as I can still make as much as I would working in today’s printing industry, why not?

JS: I’m an old-schooler. I don’t think anything’s topped the true greats like The Shining or The Exorcist. If I had to pick, my favorite film has always been the original Alien. 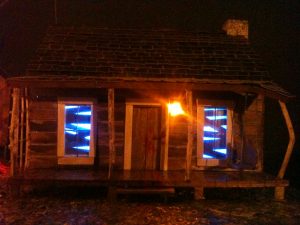 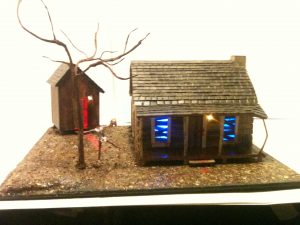 EW: Who has influenced you most as an artist?

JS: H.R. Giger is #1 of course. However, the artists I’ve learned the most from are Todd Mcfarlane and Rob Liefeld (taught me figures and form), Louis Royo (taught me shadows, shading, and airbrush….along with Giger), and Derek Riggs (of Iron Maiden’s “Eddie” fame). I probably learned the most from Riggs. I owe most of my early artistic drive to the character of “Eddie.”

Be sure to visit John’s full art gallery at www.John StewartGallery.weebly.com or at Korova Art: Artwork by John M. Stewart on Facebook.

Erick Wofford is a writer/director and independent filmmaker known for his award winning short film, “The Music of Erich Zann.” He is currently in production on his first feature film entitled, “Splatterpunk!” 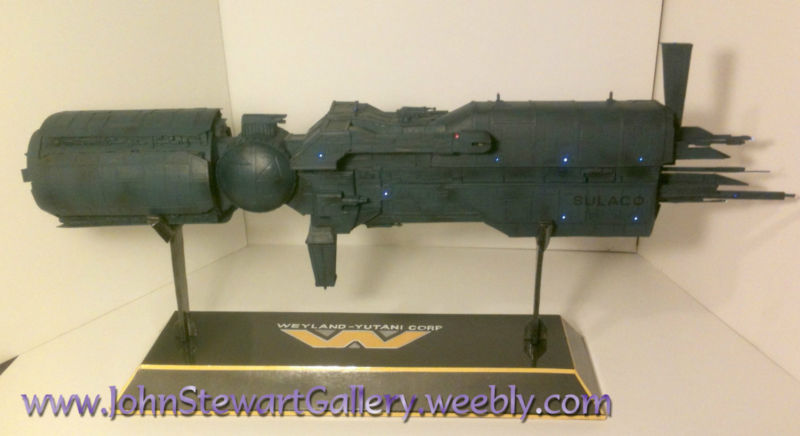 The “Sulaco” from Aliens