Mon Mon Mon Monsters delves deep into the question- “Who are the real monsters?”

Taiwanese filmmaker Giddens Ko’s dark story about a horribly nihilistic school, paired with two seriously vicious neighborhood monsters, is a very disturbing piece of horror. But not simply because of the two supernatural creatures who normally would be the big threat in a horror film. In this case, it’s the humans whose behavior we must question. Are there monsters inside all of us, just waiting to get set free? 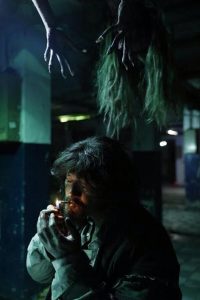 We meet our two “monsters” right away. We never find out exactly how these sisters came to be flesh-eating zombies with sharp teeth and claw-like hands, but we do learn that they love each other. After ripping a homeless guy to pieces and eating him, the touching scene that comes next, where we see the older ghoulie tenderly putting her younger sibling to bed in a cardboard box, is heartbreaking. Yes, they do what they must to survive, but there is still humanity left in them somewhere. It almost seems ok. You can’t help but have empathy for them.

Then there are the humans. Lin Shu-wei (Deng Yu-kai) is an unpopular student at a school that seems to be run by the students. He is a target for a group of cruel peers, who pick on him relentlessly. Ren-hao (Kent Tsai) is the worst of the tormentors, a complete sociopath and the ringleader of the gang. Unlike the two monster girls, Shu-wei has no place to run; he seems like a nice, sweet kid and he must go to school. I’m sure as terrible as these kids treat him, he would love to curl up and hideaway in a cardboard box himself. When he asks for help from his teacher Ms. Li, (Carolyn Chen) her solution for all his humiliation is for him and the other boys to work together doing community service. 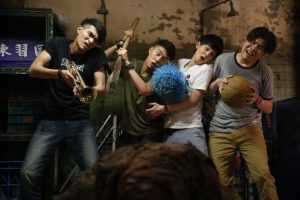 The boys are assigned to do their community service by feeding destitute old folks living in a filthy run-down tenement. Here they abuse the old folks, steal from them and generally cause trouble. They play with the poor old people like toys, teasing and shooting selfies. Even though he is appalled by the other boys’ behavior, Shu-wei eventually joins into the fun and the others seem to accept him to a point.

After stealing a trunk from one of the geriatric’s room, the boys interrupt the flesh-eating girls, munching on one of the residents. The older girl escapes, but the boys are able to capture the younger one after she gets hit by a car. Bringing her back to their hideout in the basement of the school, torture now becomes the daily activity for this group and the sad little monster becomes the object of cruel experiments. Ren-hao’s girlfriend joins them and they even pull the monster’s teeth for her to make into a bracelet. While not as horrible as a similar film, Deadgirl, from 2008, Mon Mon Mon Monsters, like the other film, brought tears to my eyes. It is hard to understand how people can be so cruel. 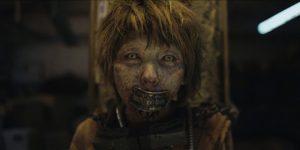 I was bullied in middle school and this film was difficult for me to watch at times. Seeing someone so damaged and helpless takes me back to that awful period and Shu-wei was bullied incredibly badly. With no help from the adults and the desire to fit, it kind of makes sense how his behavior turned so easily to the dark side. At first it seems he just wants to fit in- but the bad behavior seems to come easily. He eventually becomes like them, but it is easy to see that it is tearing him up inside. I think a turning point was when he asked one of the boys why they were torturing the girl and he answers simply “Because it’s fun!” 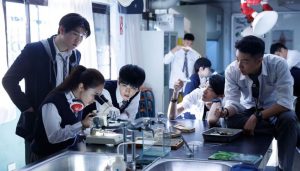 In the meantime, the older ghoulie that escaped has not forgotten about her sister. Relentlessly hunting the teens, she wants revenge and wreaks havoc on the town in some very bloody and brutal scenes. When the gang realize the monster is after them, they understand that they made a mistake and plot a way to take out the monsters. Working as a team, they come up with a plan that is flawed but could work, except that Shu-wei finally finds some deep inner strength, hating himself for what he has become. and decides to do something off-script. I truly loved the ending and did not expect it! 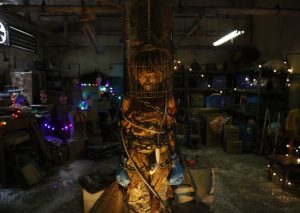 The monster sisters (Lin Pei-hsin and Eugenie Liu) were terrific! Usually, when I see creatures up close like this, the impact is lessened, but I loved them both, their makeup and their love for each other. All the SFX were stellar, both practical and CGI. There is no shortage of blood and guts!

The acting was fantastic too. I know, what? They’re monsters. All they do is grunt and growl, scream and gurgle. True. But you see their love, fear, and emotions through all the makeup and that made this film work.

Despite some poor dubbing on the copy I had, and the emotions the bullying brought up- I think this is an amazing horror film. It tells a dark and socially important story, breaks it up with some humor, gave us creatures to empathize with, and points out that there are bad humans around us every day! Could any of us become a monster in the right situation?