Move over, Sharknado! Attack of the Killer Chickens is coming! 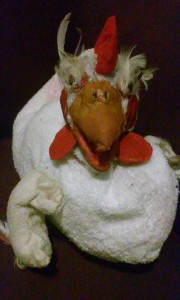 These fuckers aren’t messing around.

One of the biggest trends in the horror genre over the past few years is the over-the-top, outrageous creature feature. From the Sharknado film series to all the Lavalantulas and the Piranhacondas out there, these films have certainly ran rampant as of late, which is most likely due to their ridiculous titles. These films certainly aren’t for everyone, but if you can appreciate something silly and not meant to be taken seriously (at all), then you probably have enjoyed one of these films before. 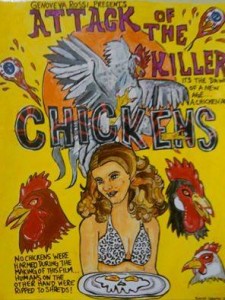 Some promotional artwork for the film, featuring director Genoveva Rossi.

Genre veteran and indie horror scream queen Genoveva Rossi, who was featured in the fun indie horror comedy known as Bite School (review here), recently made her directorial debut with a short film in the vein of Sharknado and Attack of the Killer Tomatoes. I hadn’t really heard much about this before checking it out. Really all I knew was that it seemed pretty epic and it’s being screened at festivals at the moment. After having the chance to check it out, I was thoroughly surprised.

This isn’t something that is meant to be taken seriously in any way at all, which adds a whole lot to the entertainment value. Unlike most other comedy horror shorts, this film actually manages to provide a few genuinely funny moments.  The film only lasts about 7 minutes, but would you rather see a super boring feature or a super fun short? I, for one, definitely prefer the latter. I appreciate Attack of the Killer Chickens for being outrageous, daring, and super over-the-top. This is a really unique short and I’d love to see Genoveva develop this into a feature at some point. Maybe if we generate enough buzz we can make that happen? In the meantime, I’ll be checking out more of Genoveva’s work and waiting patiently to see how much noise this film makes as it continues its festival run.