A new Kickstarter campaign is out for the UK horror feature Book of Monsters and it has a twist. In addition to the regular perks you get when donating to an indie movie fundraiser- with Dark Rift Film’s Book of Monsters, the audience gets to share in the writing! 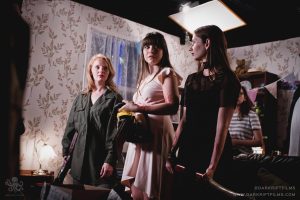 On a 12,000 budget, Dark Rift’s first feature film got world wide distribution, appeared at Cannes festival, Frightfest festival and Premiered at London’s West End Vue cinema. With over 1 million pounds worth of equipment at their fingertips (including the camera of all cameras ‘Alexa’) this time they are hoping to create something bigger, better and more epic. Book of Monsters revolves around six kick-ass women, who have to fight off a horde of terrifying monsters at an 18th birthday party. This feature-length action horror movie is now on Kickstarter, and they need all the help they can get to raise the money to produce this amazing film! Drawing inspiration from the cult horror cinema of the 80’s and 90’s, it has a dark comedy edge juxtaposed with a gory and savage story and if you click below, you can see the trailer- which I know you will love!

When you donate on Kickstarter, you get to decide which of six monsters is going to crash Sophies birthday party and the choice doesn’t end there. You will get to vote for a character’s gruesome death, a mysterious and probably deadly birthday present, pick an uninvited guest, the weapon of last resort, and the horror trope that must die! You get to change the fate of the horror movie and will get to see your choices bought to life when the film hits the big screen world wide.

Another reason this project is unique is that Book of Monsters is a female-driven monster movie. The lead characters are all female – a rare find these days. Dark Rift Film’s last feature also had women as the lead characters. In an age where promoting equality for women in film is at a peak, this company is proud to show that they believe women characters are just as great as male characters. 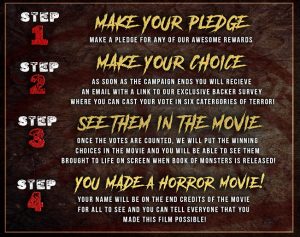