Night of the Living Dead Synthwave

An Interview with Dallas Campbell and Ogre

Synthwave musicians Ogre and Dallas Campbell released a re-score of the Night of the Living Dead. Just in time for Halloween, this new take on Night of the Living Dead is refreshing, and it adds a unique new feel to the film. You can grab the album off the Lakeshore Records bandcamp page. Or watch the full movie in the link below! It’s what I’m doing right now on Halloween.

Thanks for joining me, Robin and Dallas. It’s a pleasure to talk to you about this project. As a zombie fanatic and a fellow musician in the synthwave community, I was immediately intrigued when I heard about this Night of the Living Dead synthwave re-score. It’s a brilliant idea, and I gotta say, sounds like it was a blast to work on. You guys really nailed it! How did the concept arise?

OGRE: Thanks for having us! It was Dallas’ idea originally. He’s got a real personal connection to the film as he lives so close to where it was shot. But the project kind of came out of our previous re-score of Kubrick’s 2001, and our All Hallows‘ album. Night Of The Living Dead still retains its cultural relevance, it’s kind of timeless cinema and still has this keen social commentary. But aside from some very primitive oscillator weirdness and stock music, it lacks an original score, so it was kind of a perfect candidate in that respect.

DALLAS CAMPBELL (DC): Thanks man! And thanks for having us! Ogre and I decided to start on NOTLD after we finished recording All Hallows’.  We had already completed the 2001 project as well and wanted to re-score something that we could show to people without any legal hangups.  I grew up near the area where NOTLD was shot, and knew people that are in the film.  We both love the movie, so it seemed like a perfect fit! 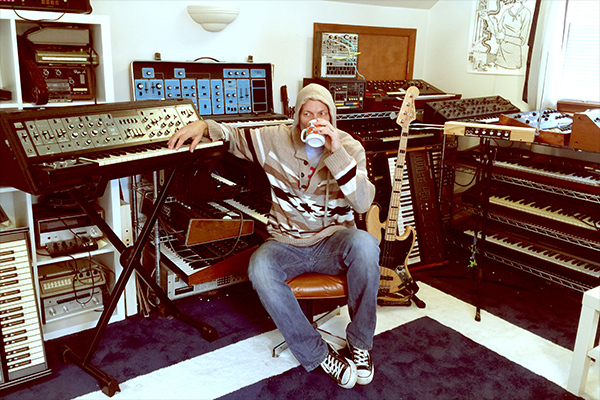 What sort of VSTs and synthesizers did you use in the production of the film? And what kind of vibe were you going for? I get a lot of Carpenter influence, and the score sounds a lot more along the lines of Goblin’s Dawn of the Dead soundtrack and John Harrison’s work on Day of the Dead than the original NOTLD score. I also really dug the Fabio Frizzi vibe in the intro. What were some of your biggest influences for this score, aside from the film itself?

OGRE: I think initially with every project we try to keep things simple, and pick a few synths that really compliment the film and try to limit ourselves whilst we write. To start with anyway, that always goes out of the window and we keep adding gear to the kit list to meet the demands of certain scenes. Dallas has this insane collection of vintage gear. Night Of The Living Dead’s shot very close up, and in black and white, so it took a bit of working out to zone in on the tone and look of the film. We definitely did a lot of pre-production on this project, making up tape loops and posting them to each other, and sampling things with contact mics. We don’t really use VSTs outside of mixing, but we’re both fans of Valhalla DSP’s reverbs and Soundtoys’ plugins. The Valhalla stuff’s especially useful when you’re working 4000 miles apart, as you can share presets pretty easily and help nail a consistent tone down. I think the haptic feedback you get from hardware’s kind of irreplaceable, and a lot of fun, but if something sounds good it doesn’t matter where it came from. I did use Kontakt for some sampling, but anything that started in the box always winds up being processed elsewhere. The Frizzi style choir we used is kind of an example of that. I think for his Fulci scores he actually use a modded Mellotron that had an extended range, so you he could get those really low ‘choir of the dead’ type sounds. I managed to source some samples of an Optigan keyboard (https://en.wikipedia.org/wiki/Optigan), which is this bonkers instrument contemporary to Night Of The Living Dead. It actually used discs in order to read sounds, so it was really ahead of its time. Anyway, it has this haunting gritty sounding choir.

I think we try to let the limitations of the instruments we’re using, and the source film itself, inform the direction we take things in. We’re huge fans of all things Goblin and Carpenter, so invariably some of that’s been absorbed into our combined musical lexicon, and we’re using a lot of the same or similar gear to what they used back in the 70’s and 80’s. In all seriousness though, Dallas Campbell’s the biggest influence on my writing when we work together. A lot of the time I’m responding to what he’s doing, and getting inspired by his approach to music and synthesis. He’s the best to work with, I couldn’t wish for a better musical collaborator.

DC: We mainly used hardware, I think 20 some different synths were used.  Some of the standouts being a SCI Pro One, Roland Sh-5, Korg MS20, and a Kawai SX240.  The film is much more raw than 2001, so that influenced the more gritty sound we had going.  I think we kinda vibe off of each other once we get in the groove.  Ogre always has some sweet idea or sound that inspires me when I’ve hit a wall.  But yeah, I think the works of people like Carpenter, Frizzi, and Goblin are constantly influencing what I do consciously or not. 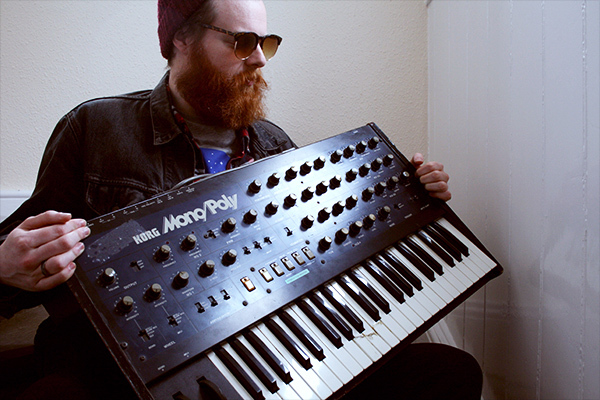 When and how did the collaborative duo of Ogre and Dallas Campbell arise?

OGRE: We moved in similar circles online, like Synthetix.FM. Dallas sent me a copy of his album Origin Seeds, which is still one of my favorite albums. We kind of became friends from there on. And one day I asked him if he wanted to re-score Kubrick’s 2001, and we’ve been writing together since.

DC: Going on two years ago, Robin, myself, and another producer had thrown around the idea of doing something together.  One dude was super busy and had to drop out, so Robin brought up the idea of taking on 2001 and that was that.

What were some of the challenges of re-scoring this zombie masterpiece, and re-scores in general? I imagine one of the hardest aspects is removing the original score and remaking some of the sound effects, while still retaining the dialogue.

OGRE: Definitely the sound design. I had to redo large chunks of the film’s audio. All of the dialogue and sound effects are on one mono track, so there were places where we simply couldn’t extract the existing sound design or dialogue, so we just had to redo it. It mainly involved a lot of contact mic-ing, wrestling with cardboard boxes and attacking vegetables, and my lady partner voiced all of the zombies. It was fun though! Getting the sound effects consistent with the rest of the film was tricky, but for some reason the dead sound of the contact microphone was pretty in keeping with the existing audio.

DC: One of the biggest challenges in re-scoring is probably doing each project in a way that’s respectful to the OG and frames the film in a different or intriguing way.  Removing the original score and trying to keep the dialogue and FX intact is tedious.  Robin actually did a lot of sound design on the re-score due to the FX being sacrificed.  His lady partner did many of the zombie groans I believe!  He recorded many of the thuds and squishes etc. 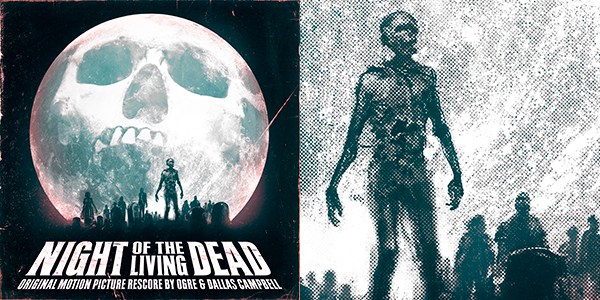 How many times did you watch Night of the Living Dead when re-scoring the film?

OGRE: Hundreds of times. Every time you’re writing or recording, you’re watching! It still hasn’t lost any of its magic, but I’d say we both know the script by heart at this point.

DC: We did it scene by scene while writing and recording. So, all totaled up it would probably be in the 100’s.

What are some of your favorite horror movies and directors?

OGRE: Obvious favorites would be Carpenter, Fulci, Kubrick, Romero, Argento and company. I’ve a soft spot for things like The Living Dead At The Manchester Morgue too. In terms of more contemporary horror directors, I really like Ben Wheatley and Ti West’s movies.

DC: Carpenter, Romero, Miike, Fulci, Argento, Cronenberg, Craven..too many to list!  I gotta say Dawn of the Dead 1978, that was the first horror film i can remember really liking when i was a kid.

What can we expect in the future from Dallas Campbell?

What can we expect in the future from Ogre?

OGRE: I’m sat on a few releases at the moment, and I’m busy working away on a few scores, so plenty of soundtracks, both real and imaginary, but I can’t say much more than that at the moment.

What do you guys have in the works as a duo for us all to look forward to? Any plans to re-score other horror classics? I would consider this Night of the Living Dead synthwave re-score a complete success. A whole new way to watch the movie!

OGRE: Thank you. I think one of things we hope to achieve with a re-score is to be able to look at the original film in a slightly new light. I don’t think everything needs a re-score, but there’s certainly scope with some films to do something new or interesting, and to try and open up a new way of reading a film for a viewer. We’re working on a few different projects together at the moment which will hopefully see the light of day at some point next year.

DC: Thanks man!  Robin and I are currently in the meat of two more collab projects together! Could be other rescore in the future, ya never know!

Thanks so much for chatting with me. Feel free to leave some parting words with our readers and tell them where to keep up to date on what’s going on with Ogre and Dallas Campbell.

OGRE: Thanks a ton for taking the time to chat with us! If you’d like to stay up to date with us, you can follow us on Facebook, Twitter or Dallas’ Instagram, links are below. Our Night Of The Living Dead re-score is available from Bandcamp, pretty much all digital retailers, and the film’s available to watch in full for free on Youtube.

DC: Thanks for the chat man!

I’ve embedded the Night of the Living Dead synthwave re-score by Dallas Campbell and Ogre below. Check it out, and enjoy! And check out these links to find more music and projects from OGRE and DALLAS CAMPBELL!